In response to my article “The Eschatological Vacuum,” someone commented that I was the one preoccupied with eschatology. Yes, I write a great deal on the subject because I believe prophetic speculation is a hindrance to the proclamation of the kingdom of God that so many prophecy “experts” claim is future but not before the rise of the antichrist, a rebuilt temple, and the rapture of the church. Paul proclaimed the kingdom of God and not the “rapture of the church” (Acts 28:31).

Also because modern-day prophecy works get so much wrong about the Bible. There’s even the problem of foreign affairs since Israel is made the focus of history to almost the exclusion of any other nation. In some cases, this prophetic preoccupation can be used to justify military action in the name of God as part of some inevitable end-time scenario.

Here was my first response:

Let’s see, 13+ volumes [there are actually 16 volumes] of Left Behind, Left Behind: The Kids Series, Spinoff books, films, graphic novels, video games. Let’s not forget Hal Lindsey’s mega-bestseller (around 30 million copies) [The Late Great Planet Earth (1970)], four editions of Armageddon, Oil, and the Middle East Crisis. [When oil was no longer a big issue, a new edition emerged updated by John Walvoord’s son and Mark Hitchcock with a slightly different title: Armageddon, Oil, and Terror: What the Bible Says About the Future. When historical events change, prophecy book titles change and so do the end-time players.]

Here was his response to my comments:

Those books were decades ago. My grandfather was reading Hal Lindsey on the trolly in Philly in the 70s.

Here was my response:

Yes, and those books are still being sold. Your grandfather was not reading the Left Behind series in the ‘70s. The last Left Behind book was published in 2007 [not in the 1970s]. A reboot of the Left Behind film was in 2014. Another one is under production.

It also goes to show how long the preoccupation with the prophetic end has been going on. It’s been more than 50 years since Lindsey’s Late Great Planet Earth Was Published in which he strongly suggested that the rapture of the church would take place before 1988.

I also included this link to http://armageddonbooks.com. Dozens of books are published every year by well-known and not-so-well-known prophecy writers. I can’t keep up with them.

There are six pages of prophecy books on Harvest House’s site.

I’ve attached a list of David Jeremiah’s books on Bible prophecy in addition to his new book Where Do We Go from Here?: How Tomorrow’s Prophecies Foreshadow Today’s Problems, already a bestseller.

I could go with John Hagee, Mark Hitchcock, Ron Rhodes, etc. Check out “Best Sellers in Christian Prophecy” on Amazon.

Then there are the prophecy study Bibles:

Then there are the prophecy chart books: 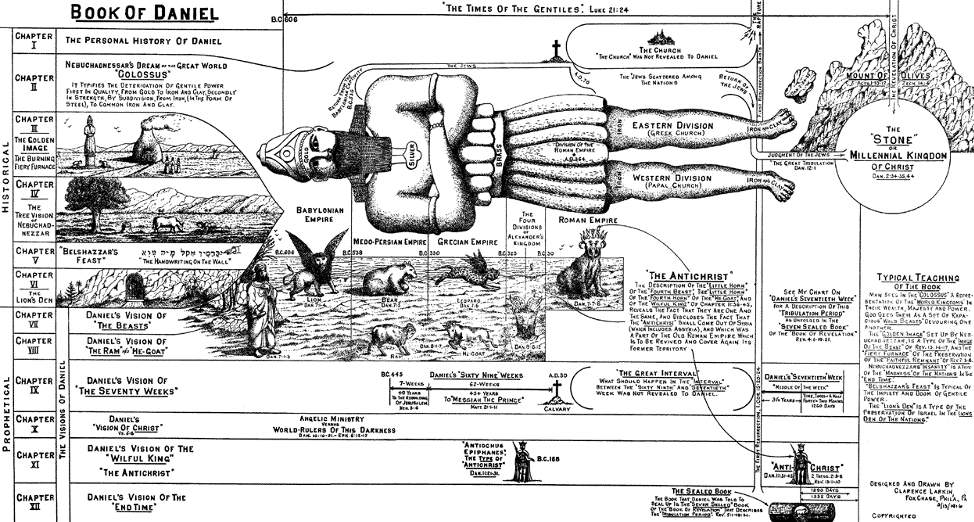 There has been a large appetite for end-time books in the modern era— from Oswald J. Smith (1889–1986), who in 1926 predicted that Mussolini was the biblical antichrist, to Edgar Whisenant who was emphatic that the rapture would take place in 1988. Then it was 1989. Twenty-three reasons were offered in evidence for a 1993 rapture that never came. Still not shaken by his poor prophetic track record, Whisenant predicted earth’s destruction by nuclear fire in 1994. He continued to speculate into 1997 with similar results.

Many people are surprised to learn that left-behind-type novels have been around for more than 100 years. Sydney Watson’s Scarlet and Purple (1913), The Mark of the Beast (1915), In the Twinkling of an Eye (1916), which had gone through 25 printings by 1933, and The New Europe (1915) are early examples of the serialization of fictional prophetic themes seen through the lens of current events, the moral state of the nation, anti-Catholic fervor, and destabilized world politics. In 1916, In the Twinkling of an Eye anticipated the LaHaye-Jenkins title and theme with these lines: “Think of what that will mean, unsaved friend, if you are here today. Left! Left behind!” In 1937, Forrest Loman Oilar’s Be Thou Prepared For Jesus is Coming appeared. Oilar describes the entire left-behind premise in one volume, including the millennial reign and the subsequent Great White Throne Judgment. Like LaHaye, Oilar wrote his novel as an evangelistic tract “to bring to the unbeliever, ‘the Jew first, and also to the Gentile,’ a warning against false doctrines and to show the hope that is yet in store for him if he accepts the true gospel.”

If we are counting books, novels, films, study Bibles, charts, articles, and radio and television, it seems to me that those who are preoccupied with the end times are those associated with the dispensational and related interpretative belief systems. With so much prophetic material in the Bible—somewhere around 25% of the total makeup of Scripture—it’s difﬁcult to argue that an expert is needed to understand such a large portion of God’s Word and so many ‘experts’ could be wrong generation after generation. Eschatology 101 changes all that. In this course, Gary DeMar strips Bible prophecy of all of its mystical and magical interpretations and sets the record straight. Complete with audio, video, and text, Eschatology 101 is the next best thing to sitting in a classroom with Gary himself.