My friend Robert Cruickshank sent me a copy of a letter he received from a Jehovah’s Witness. It sounded so much like what we hear from Christians pushing the claim that we are living in the last days.

I’m writing because as you know we are living in what the [Bible] refers to as the last days of this system of things, which begs this question; what’s next?

Please a moment of your time to read what the bible says. Our website jw.org has several bibles to choose from and articles to read. The videos are wonderful and insightful. I’m sure you will enjoy them. 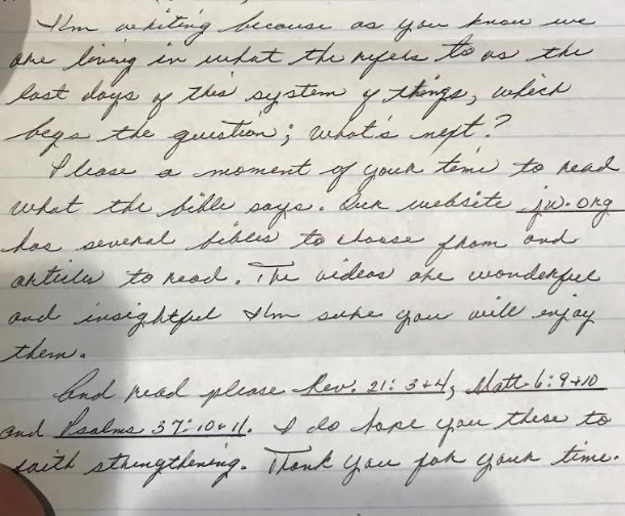 We almost never get visitors to our house unless we invite them. When someone pulls into our driveway, it’s to use it as a turnaround. One Saturday years ago, a shiny new SUV rolled up the driveway and a smartly dressed couple got out and came to the door. As I suspected, they were Jehovah’s Witnesses. There’s a Kingdom Hall not far from our house. I was surprised to see them. Word usually gets around not to go to that house. This couple must have been new to the neighborhood. I was my usual affable self as I greeted them.

I noticed that they were carrying the latest copies of The Watchtower magazine and Awake! Both dealt with the last days. In fact, the cover of Awake! asked this question: “Are We Living in the Last Days?” 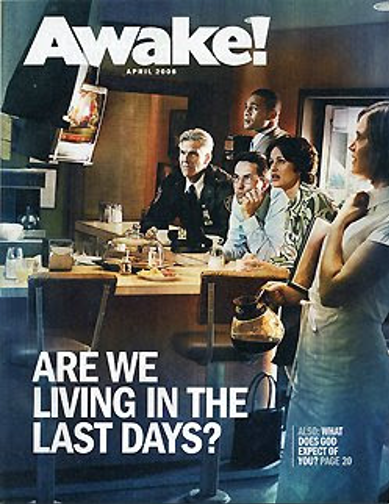 This is the same title that I used for a series of talks I gave on Bible prophecy many years ago. My answer was “no,” and still is. The Jehovah’s Witnesses give an emphatic “yes.” The JWs have been in the last-days-business for more than a century.

The JWs follow an end-time scenario that is not much different from the one outlined in the Left Behind series and in so many books dealing with Bible prophecy. Appeals are made to 2 Timothy 3, sections of Daniel, and, of course, the Olivet Discourse in Matthew 24. Just like the dispensationalists, the JWs point to 2 Peter 3:3–4 to support their claim that those who do not believe we are living in the last days are “scoffers.” As evidence that we are living in the last days, they, like dispensationalists, point to “a tribulation that would be greater than any that had yet occurred” (Awake!, April 2008, 4). Premillennialist Michael Brown said the same thing in our online debate. Then there are the obligatory references to nation rising against nation, and kingdom against kingdom, earthquakes, pestilence, and the worldwide preaching of their version of the gospel into all the world in our day (Matt. 24:14).

You will also find that JWs and dispensationalists share the belief that world wars, terrorism, tsunamis, and diseases like malaria, influenza, and AIDs are empirical evidence that the end must be near. There is also the common belief that Armageddon is still in our future. Like the dispensationalists, JWs “are convinced of the reality of these prophecies” (Awake!, 7).

Jesus predicted that He would return within the time period of that generation alone. Unfortunately, too many Christians are giving the wrong answer when skeptics claim Jesus was mistaken. Everything Jesus said would happen before that generation passed away did happen.

JWs travel in twos. This is a good strategy (see Luke 10:1). Usually, one is a trainer, and the other is a trainee. I direct my comments to the trainee. The trainer was trying to leave, but the trainee wanted to ask some questions. I used the opportunity to point out some things that she will never hear from the local Kingdom Hall. I went through the usual points that Matthew 24 is describing events in Jesus’ day, and what would happen to that particular generation (24:34). Since so much emphasis is on worldwide evangelism, I also explained that the gospel proclamation in 24:14 is a description of the gospel going out to the then known world. The Greek word often translated as “world” is _oikoumen_ē and described the political boundaries of the Roman Empire (Luke 2:1; Acts 11:28) Rom. 1:8; Col. 1:6, 23; 1 Tim. 3:16).

I made a few other points. My goal was to get the trainee to question what she had been taught. I’m sure there was some debriefing going on when they returned to their SUV.

What you call an interview is actually a debate. You want to debate the issue. I can appreciate that you’re very busy too, but I’m only responsible for controlling my own schedule, and I have to decide what’s the best use of my own time and energy. I don’t believe it’s a good use of my time and energy at this time because I believe that debating you and other preterists on these kinds of issues lends added credibility to your view. Having someone to debate makes your view of Ezek 38 appear like another equally acceptable alternative, which I don’t believe it is. I try to be careful in what I choose to do with this in mind. I’m sure you disagree with me, but that’s my answer to your invitation.

I answered by pointing out that if my view is so easy to refute, he should have no trouble mopping the floor with me. The fact that one of his own co-authors agrees with me on a significant point regarding Ezekiel 38–39 (that the future battle depicted in Ezek. 38–39 would have to be fought with ancient weapons because of “literalism”) is direct evidence that the prevailing end-time scenario outlined by dispensationalists is falling apart.

I understand anyone’s reluctance to debate. I don’t like doing debates because of the time involved in preparation and limitation factors regarding debates. But claiming that debating me “and other preterists on these kinds of issues lends added credibility” to preterist arguments cuts both ways. Such a debate would also be giving my audience the opportunity to hear his arguments, and maybe his arguments would convince them that I am wrong. Tim LaHaye argued in a similar way when American Vision asked him if he would like to sit down and discuss our differences. He did not want to legitimize any part of what I teach by discussing eschatology together.

The Gog and Magog End-Time Alliance

What if we read Ezekiel 38 and 39 literally? Is it possible that the Gog and Magog alliance that was designed ‘to destroy, to kill and to annihilate all the Jews, both young and old, women and children’ has already taken place? That’s exactly what The Gog and Magog End-Time Alliance attempts to show.