Dr. Jim Garlow has a great way of answering resistance to politics among Christians:

“I’m not political, I’m Biblical, but you don’t recognize it. I’m governmental, and Biblical because God is.

“And the enemy loves that because as long as you ostracize that and marginalize it: ‘Well, he’s the political guy’; ‘That’s just political stuff’; ‘You don’t want to be political’; ‘We don’t want to be identified with the Republican Party now do we? That would be terrible to be in their back pocket.’ “As long as we play that game, the enemy is delighted; he controls that dynamic.”

I tell people this all the time, if you don’t believe that the Christian religion and politics are inextricably linked, then you have not read the gospel…. All you have to do is go to … the story of Jesus Christ. In order for Christ to be crucified, the last step that those folks had to take was to speak with the governor. And so, all politics and religion are linked at the hip, and you can’t unlink them. And for those folks who say the church should not be political yet run to the church every time they want the church to promote their leftist ideals are more than hypocritical.

You need to listen to his comments on “transgenderism” here. If only more pastors would tell it like it is.

There’s a long history of the church telling it like it is. A.A. Hodge (1832–1886), professor of systematic theology at Princeton Theological Seminary, warned a few months before his death: “I am as sure as I am of the fact of Christ’s reign that a comprehensive and centralized system of national education, separated from religion, as is now commonly proposed, will prove the most appalling enginery for the propagation of anti-Christian and atheistic unbelief and of anti-social nihilistic ethics, social and political, which this sin-rent world has ever seen.”[1] He went on to predict that “the United States system of national popular education will be the most efficient and wide instrument for the propagation of Atheism which the world has ever seen.”[2] The seeds of this present crisis were watered first not by socialists, terrorists, perverts, or criminals, but by Christians who, in years past, decided to retreat from public involvement to pursue private piety. Now generations later, faulty perspectives on politics continue to hamstring Christian churches at a time when this country needs biblical answers for political dilemmas more than ever.

“To the pulpit, the PURITAN PULPIT, we owe the moral force which won our Independence,”[3] so said John Wingate Thornton in The Pulpit of the American Revolution. Ministers of the gospel confronted the issues of their day by appealing to the people in terms of the Bible. The annual “Election Sermon” still “bears witness that our fathers ever began their civil year and its responsibilities with an appeal to Heaven, and recognized Christian morality as the only basis of good laws.”[4] In addition, the clergy were often consulted by the civil authorities in the colonies, “and not infrequently the suggestions from the pulpit, on election days and other special occasions, were enacted into laws. The statute-book, the reflex of the age, shows this influence. The State was developed out of the Church.”[5] The American pulpit “gave birth to America,” Alexis de Tocqueville (1805–1859), author of Democracy in America, observed long ago:

On the eve of the revolution, in his last-ditch attempt to stave off impending catastrophe, Edmund Burke reminded the House of Commons of the inseparable alliance between liberty and religion among Englishmen in America. Mercy Otis Warren noted in their 1805 history of the American Revolution: “It must be acknowledged, that the religious and moral character of Americans yet stands on a higher grade of excellence and purity, than that of most other nations.” Of the Americans on the eve of the Revolution Carl Bridenbaugh has exclaimed, “who can deny that for them the very core of existence was their relation to God?”[6]

There were some ministers, however, who refrained from appealing to the Bible for examples and prescriptions for reform. Rev. Nathaniel Ward (c. 1578–1652), pastor at Ipswich, Massachusetts, in his election sermon of June 1641, grounded “his propositions much upon the Old Roman and Grecian governments.” John Winthrop (1588–1649), first governor of Massachusetts, described this as “an error.” There was good reason for Winthrop’s objection: Why should the church appeal to “heathen commonwealths” when it is the heathen principles that have made it necessary for the church to be involved in reform efforts? Winthrop believed that “religion and the word of God make men wiser than their neighbors,” thus, “we may better form rules of government for ourselves” than to adopt the failed principles of the past, what he called, “the bare authority of the wisdom, justice, etc., of those heathen commonwealths.”[7] It was the heathen past that had to be swept clean if the people of God were to become the model of Christian charity that Winthrop spoke about aboard the flagship Arabella in 1630. Such a task is no less true in our day.

And yet there are prominent Christians who do not see that transformative Christianity is something Christians should pursue. Here’s a modern-day example: 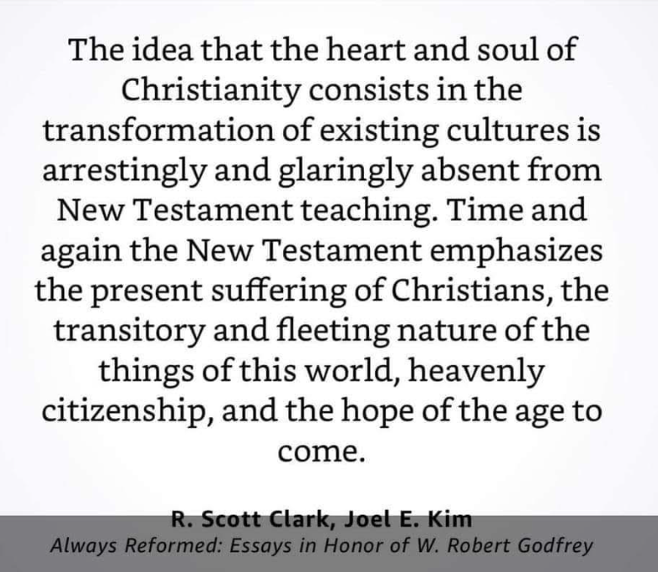 And yet these “Always Reformed” Christians are living off the moral capital of Christians who did believe in the “transformation of existing cultures” as the fruit of applying the Bible to all of life.

There are implications to the gospel message. Jesus said that you will know a converted person by the fruit his profession produces (Matt. 7:15–23). A “profession of faith” does not validate a person’s conversion. James tells us that faith without works is dead (James 2:14–26) “This is pure and undefiled religion in the sight of our God and Father, to visit orphans and widows in their distress, and to keep oneself unstained by the world” (1:27). Should Christians stay out of politics if laws are passed that hurt orphans and widows? Homosexuals are pushing to have laws changed to allow “gay couples” to adopt children. Many of these adoptees are orphans.

Maybe the advocates of a “just preach the gospel” message have a limited understanding of the comprehensive transforming effects of the gospel. Paul told the Ephesian elders that he did not shrink from declaring to them the “whole purpose of God” (Acts 20:27). A reading of Paul’s letters to the churches will show that he spent as much time on Christian behavior after conversion as he did on correct doctrine. He wrote about the “renewing of the mind” (Rom. 12:2). Certainly, an application can be made about education, entertainment, and reading material since we are not to be “conformed to this world” (12:2). Paul also discusses such “secular” issues as “contributing to the needs of the saints” (our duty to the church) (12:13) and the ministry of civil government, including paying taxes “to whom tax is due” (our duty to the State) (13:7). Politics is one area where many Christians want to draw the line.

Ellis Sandoz writes the following in Political Sermons of the American Founding:

It is hoped that but a few will think the subject of [civil government] an improper one to be discussed on in the pulpit, under a notion that this is preaching politics, instead of Christ. However, to remove all prejudices of this sort, I beg it may be remembered that “all Scripture is profitable for doctrine, for reproof, for correction, for instruction in righteousness” [2 Tim. 3:16]. Why, then, should not those parts of Scripture which relate to civil government be examined and explained from the desk, as well as others. Obedience to the civil magistrate is a Christian duty; and if so, why should not the nature, grounds, and extent of it be considered in a Christian assembly? Besides, if it be said that it is out of character for a Christian minister to meddle with such a subject, this censure will at last fall upon the holy apostles. They write upon it in their epistles to Christian churches; and surely it cannot be deemed either criminal or impertinent to attempt an explanation of their doctrine.[8]

Mayhew’s point is well taken. If the writers of Scripture, as instruments of God’s will (2 Tim. 3:16–17), did not think it improper to discuss political issues, then how can ministers who claim allegiance to an inspired and infallible Bible fail to address not only politics but every issue discussed in Scripture? The entire created order is open to discovery and study.

Paul repeats the commandments prohibiting adultery, murder, and theft (Rom. 13:9), and sums up his specific exhortation on the law with the general command to “love your neighbor as yourself” (13:9). These instructions came after Paul informs the Roman Christians that the civil magistrate is a “minister of God” (13:4) who is to decide between good and evil behavior (13:3). What standard should the magistrate (God’s civil minister) use to make these determinations?

These commandments have multiple social applications. Certainly, civil magistrates have a duty to love their neighbor by not burdening them with excessive taxation and bureaucratic entanglements to frustrate their God-endowed freedoms to earn a living and provide for their families.

No doubt the magistrate is to work for a civil order that results in a “tranquil and quiet life in all godliness and dignity” (1 Tim. 2:2) for the people of God. In the first century, the most these Christians could do was to appeal to God with “entreaties and prayers, petitions and thanksgivings” since they had no civil freedom to petition the Roman Empire with their political wishes (2:1). God through His mercy has established the United States as a civil society in which we can through our voice and vote make changes for the betterment of all.

It seems that Paul went beyond what many might think is “just preaching the gospel.” You can find similar emphases in all the New Testament letters as well as in the ministry of Jesus. Redemption from sin, the new birth, is the first step in what it means to be a “new creature” in Christ (2 Cor. 5:17). These first steps are described by the writer to the Hebrews as “elementary principles of the oracles of God” (Heb. 5:12), the milk stage of growth (1 Peter 2:2). The time must come when the student matures to become a teacher (Heb. 5:12). The goal is to grow in Christ. “For everyone who partakes of milk is not accustomed to the word of righteousness, for he is a babe. But solid food is for the mature, who because of practice have their senses trained to discern good and evil” (5:13–14). The “only-preach-the-gospel” mentality stunts the growth of the new convert. The writer of the letter to the Hebrews is adamant about development in the faith, so much so that he offers the following admonition to his readers: “Therefore leaving the elementary teaching about the Christ, let us press on to maturity, not laying again a foundation of repentance from dead works and of faith in God” (6:1).

[3]John Wingate Thornton, The Pulpit of the American Revolution or, The Political Sermons of the Period of 1776 with a Historical Introduction, Notes, and Illustrations (New York: Burt Franklin, [1860] 1970), xxxviii. Emphasis in original.

[4]Cited in Thornton, The Pulpit of the American Revolution, xxiii. Emphasis in original.

[5]Thornton, The Pulpit of the American Revolution, xxii-xxiii. Emphasis in original.

[7]Thornton, The Pulpit of the American Revolution, xxv.

[8]Jonathan Mayhew, A Discourse Concerning Unlimited Submission and Non-Resistance to the Higher Powers (January 30, 1749) in Thornton, The Pulpit of the American Revolution, 47–48.