As many of you probably know, Georgia has tightened up its voting laws, and like clockwork, the grievance culture has sprung into action. What does the reform legislation do? First, it requires those who vote in person to show a picture ID. Second, those who vote by mail via an absentee ballot must also be identified by name and address. Third, the time to cast an absentee ballot has been reduced from 180 days to 59 days before the election. Can you imagine only having two months to send in your ballot? That’s got to be racist! It wasn’t that long ago that voting took place on one day—election day! There was no early voting.

For the grievance culture, these fundamental voting principles are akin to the Jim Crow era when such laws included poll taxes, literacy tests, and grandfather clauses to suppress poor and racial minority voters.

There is nothing in the Georgia legislation that discriminates against any group. The law applies to everyone equally. The claim is made that black people are disenfranchised by the new legislation. Such claims denigrate the intelligence of black people. “They’re not capable of figuring out how to vote like white people, so they need special consideration.” What an insult.

Identification is necessary for driving a car, cashing a check, visiting a doctor or hospital, flying in an airplane, buying alcohol, purchasing cigarettes, applying for good stamps and welfare, Medicare and Social Security, unemployment compensation, renting or buying a house, adopting a pet, rent a motel room, getting married, applying for a hunting and fishing license, applying for a cell phone number and phone, pick up a prescription, hold a rally or protest, and buying a gun!

“Majorities of whites (74%), blacks (69%) and other minorities (82%) say voters should be required to show photo identification before being allowed to vote,” Rassmussen Reports found among 1,000 likely voters polled throughout the U.S. (Source)

Even along party lines, 60 percent of Democrats, 89 percent of Republicans, and 77 percent of unaffiliated voters responded in the affirmative.

Georgia’s voting reform bill does not discriminate against anyone. The law applies to everyone equally. The fact that some people do not have an ID (e.g., my 98-year-old mother-in-law) should not be an exception. If no ID is needed, then anyone—citizen or not—can vote. If no ID is required, then non-existent people can and often do vote. Voters could cast multiple ballots.

How gullible must a person be to believe that it is racist to require every citizen to show a photo ID to vote? The media is “trumping up” another boycott by suggesting that people are furious at Georgia’s recent new legislation that requires exactly that.

And who will be hurt by a boycott? That’s right, mostly people who the Grievance Culture claims they have been put on earth to protect. Major League Baseball is considering moving the All-Star Game out of Atlanta because the new voting law requires an ID. Try buying a beer at the Atlanta Braves stadium without having to show an ID. Who will be hurt? Restaurants. Motels. Vendors. Transportation industry.

Leo Terrell had this to say about the charge that Georgia’s voting laws are racist and similar to Jim-Crow-era voting suppressing:

I’m offended by anyone who tries to play the race card to protect me because I’m Black. Let me be clear, I want to make sure everyone understands this because I feel like I know this law better than anyone else.

Jim Crow does not exist. I think a lot of people who use that term don’t even know what it means. It’s referring to the segregation of issues and policies based on race. That does not exist. It was eliminated by the Voting Rights Act. Look at the history.

But, it’s used as a throw-in term, nobody knows what it means. I find it offensive for anyone to say that Black people have a problem getting an identification card, a driver’s license, voter ID. You look at every demographic, everyone supports voter ID because we want to make sure that the people are the right person. Election integrity is to make sure we don’t have fraudulent voting.

None of these facts matter to the Grievance Culture, because it’s rarely about the facts and voting integrity. Getting Leftists elected to office is the goal, and for them, the end does justify the means.

Because the facts of the legislation cannot be argued with integrity, poisoning the well has become the tactic as the following trending Twitter post highlights:

2. Notice the antebellum-style portrait behind Kemp as he signs the suppression law?… I can report the measure to limit Black voting was signed under the image of a notorious slave plantation in Wilkes County, GA.

The Painting came from the Georgia Council for the Arts, hardly a racist institution. See here. 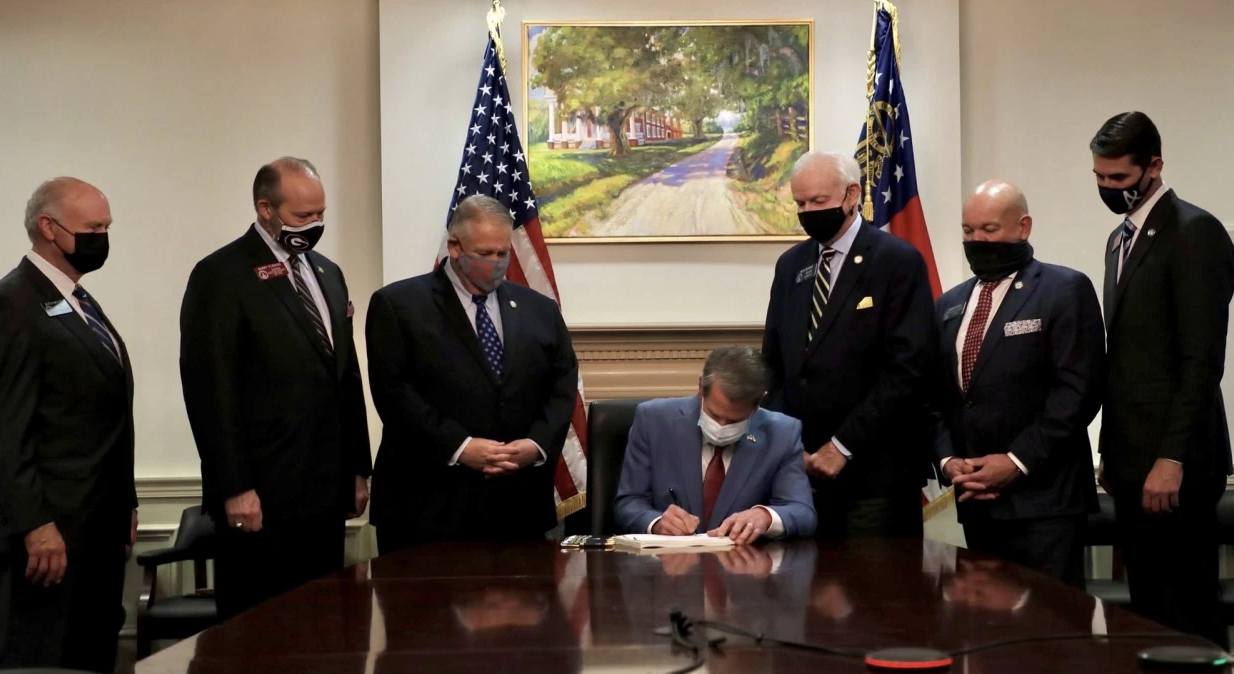 Since 2012 Art of Georgia exhibits have displayed 354 works of art by 261 Georgia artists in the Office of the Governor at the State Capitol. In 2019, for the first time, the program has been expanded to include The Governor’s Mansion.

What these Grievance merchants aren’t telling their grievance associates is that Callaway Plantation was transformed years ago and remains only as a 56-acre historic restoration project that “offers a glimpse into the bygone era of working plantations in the agricultural South.” It’s a reminder of what was, not what is in Georgia.

Callaway Gardens is an award-winning, 2,500-acre gardens and resort nestled in the southernmost foothills of the Appalachian Mountains in Pine Mountain, Georgia. In addition to four types of accommodations, twelve restaurants and plenty of shopping, guests enjoy lots to see and do at this family-friendly getaway. A Discovery Center, Raptor Shows, Butterfly Center, Azalea Bowl, Azalea Garden, 10-mile bicycle trail, and miles of nature trails showcase the beauty of nature.

The fact that Calloway Plantation has been transformed into Calloway Gardens should be something to celebrate. Because the new Georgia voting laws do nothing to suppress the Black vote, the Grievance brokers have to divert attention away from facts by focusing on a painting that has nothing to do with Jim Crow laws.

What many people do not realize that those pushing for a less secure election are misrepresenting Georgia’s Election Integrity Act as “Jim Crow 2.0” are making a lot of money off the fake outrage. “Stacey Abrams is making a lot of money off of this,” Governor Brian Kemp told Breitbart host Matthew Boyle. “She’s getting billionaires and other people and people that don’t even have a lot of money to give money to this cause, really saying things that are untruthful to pad her bank account.”

Consider this from Kemp:

“I think Joe Biden’s so focused on Georgia’s election law even though he doesn’t know his own laws in his own state [Delaware] are more restricted than we are [in Georgia] to take the focus away from the outrageous things that are happening on the border right now with kids being trafficked and people swarming across the border.”

Kemp described Abrams’ persistent attacks on Georgia’s Election Integrity Act bill SB 202 as a “scam and a racket.” And I will add that most of those promoting Grievance Culture causes are scamming people. The sad thing is that most people don’t know they’re being scammed right out of their liberty.

American Vision has thoroughly renovated, revised, and updated Gary DeMar’s monumental work into this beautiful one-volume hardback. With a fresh new look, more images, an extensive subject and scripture index, and an updated bibliography, God and Government is ready to prepare a whole new generation to take on the political and religious battles confronting Christians today.