Consider the following from David Jeremiah:

I’ve studied the signs of the times and believe we’re approaching a global cataclysm — one predicted in our Scriptures and unfolding before our eyes. All this came to me in a sort of rush months ago as my wife Donna and I were watching the morning news — every story more distressing than the one before. We sat there viewing the burning cities, backbiting politicians, runaway infections, heated elections, social upheaval, racial tensions, skyrocketing crime, shouting pundits, deafening lies, eroding sands, and cracking foundations.

I said to her: “You and I are watching the dismantling of America.” My new book, Where Do We Go From Here? was born in that moment.

Dip into any century and you will find similar descriptions by prophecy writers. I know, I know, this time it’s different. That’s what prophecy writers said with the rise of Islam, the Holy Roman Empire, the Black Death in the 14th century where it’s been estimated that 25 million people in Europe died, the French Revolution, World War I, the Spanish Flu, World War II and the Third Reich, and even godless Communism. Why the End of the World is not in Your Future

Nearly every prophecy book being published today points to the Gog and Magog alliance as evidence that we are living in the Last Days, and the world is on the eve of an inevitable destructive war and the death of billions. Ezekiel 38 & 39 are being used by today's prophecy writers as a prophetic blueprint for our time. These same prophecy writers almost never tell their readers that there is a long history of failed predictions based on these two chapters.

I know, but Israel’s back in the land, and that makes all the difference. Hal Lindsey, Chuck Smith, and others said that the rapture of the church would take place within 40 years of 1948, give or take a few years. And yet here we are 33 years beyond the time when the “Great Snatch” (as Lindsey described the rapture) was to take place.

Take a look at the first panel below. What’s missing from Revelation 1:3 that establishes the timing of the fulfillment of the revelation?: “… because the time is near.” 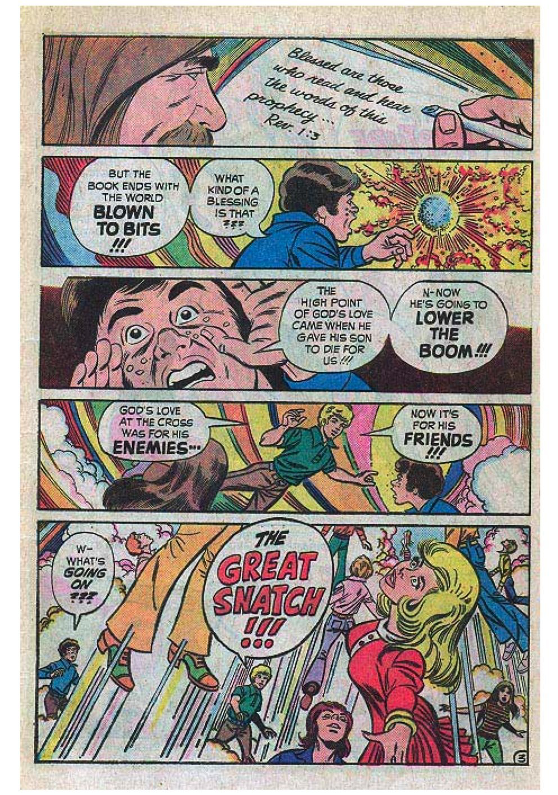 Do you think this type of thinking has had a negative impact on the way Christians have approached the world that has contributed to the mess we’re in as David Jeremiah has described it? Do we deserve some of the blame?

Recently I responded to a Facebook post that wanted to know the best way to engage someone who holds a different view of Bible prophecy. I suggested the question method: Where does it say the following in the New Testament?

· A verse that tells us that the church will be taken off the earth before, during, or after a seven-year period?
· The antichrist will make and break a covenant with the Jews in this seven-year period?
· The temple will be rebuilt?
· There will be a one-world government and monetary system?
· Israel will return to their land?
· Jesus will reign on the earth for a thousand years?
· There’s a gap between the 69th and 70th weeks of Daniel’s 70-weeks-of-years prophecy?

While millions of Christians are convinced we are living in the last days and the so-called rapture of the church is near because supposedly all the prophetic signs are in place, other eschatological ideologies are filling in the vacuum left behind by centuries of errant biblical eschatology.

For example, Communism has always been an eschatological movement. “Karl Marx was convinced that capitalism was destined to collapse. He believed the proletariat would overthrow the bourgeois, and with it abolish exploitation and hierarchy.” Marx believed that capitalism was the final obstacle before the fullness of Communism would be realized. For Marx, history was all about economics and class struggle to achieve a classless society. It never happened, and can never happen, but it’s the promise of the eschatological inevitability of Communism that makes it attractive.

Francis Nigel Lee wrote 1000 pages about it in his doorstopper-sized book Communist Eschatology.

Of course, Communism turned out to be an abject failure, but it’s done great damage on its way down to collapse. There are pockets of the system still functioning, but over time they will fail. China is coping with a renewed Communist vision but with the help of the somewhat capitalist West. Pure Communism cannot work.

When the Soviet Union became the former Soviet Union, remnants of the old order and the devastation remained. Decades of failed central planning cannot be remedied in a day or even a decade. “In August 1991, while the USSR’s reforming General Secretary Mikhail Gorbachev holidayed in his Ukrainian dacha, a group of hard-liners seized power.” This resulted in Boris Yeltsin and his supporters assuming control and brandishing the old Russian flag in hopes of returning to the glory days of Mother Russia. But what were they about to control?

By this stage, the Soviet Union was itself dying of alcohol, and attempts to treat it proved fruitless. One of the biggest mistakes made by Gorbachev — a very moderate drinker, which is why he’s alive and his rival Yeltsin is long dead — was to raise the tax on vodka, as part of a drive to tackle the country’s catastrophic problem with drink. Russian humour is famously bleak and sharp, and this led to a joke in which a boy asks, “Papa, and this means that you shall drink less?” “No, son, this means that you shall eat less”

Alcohol played a central part in the demographic collapse that pre-empted the political fall of the USSR. It was back in the Seventies that people first noticed that in the Soviet Union people were starting to die younger. The decline in life expectancy affected not only the old, but the middle-aged. There was no famine, no foreign invasion, no natural disaster; instead people were drinking themselves to death out of despair. A country in which life is getting shorter — and worse — for its citizens has no future.

Russia’s birth rate had long collapsed, too. Two things drive higher fertility in wealthy countries — religion and affordability. All the major religions promote childbearing, give prestige and status to women who have children, and men who stick around; on top of that, attending a church, mosque or synagogue is associated with a number of measures of wellbeing that breed optimism.[2]

It’s the same with all systems built on the premise that given enough time, authority, control, and power the world can be reshaped by God’s image-bearers. This was the first sin. It continues to tempt us.

The only counter to this sin is men and women remade in Christ and start the rebuilding process that others started throughout the centuries and that remnants remain. God is not going to rapture us from the task at hand.