The red heifer story is back in the news. “The delivery of five red heifers to Israel has sparked a worldwide debate about its significance in biblical prophecy, particularly among Christians who believe a third temple will be built during the End Times,”[1] of which the New Testament says nothing. You will search the New Testament with a fine-tooth comb, and you won’t find any mention of another temple being built or the necessity for animal sacrifices to be performed.

Last week in Jerusalem a baby cow was born. Watch the adorable infant scamper around her mother in a short video released on YouTube by the Temple of Israel, below. Why is this worth your attention? Because—according to some Jewish and Christian scholars—this tiny red calf may be ushering in the end of the world.

The reddish-colored female calf was reportedly born in Israel on August 28 [2018] and is being raised in accordance with the Jewish laws of the Torah, according to the Temple Institute. (CBN)

This is more about Jewish mythology than biblical theology. Even CBN News, a network that is heavily invested in end-time speculation, ended its article on the topic with this comment: “Meanwhile, there’s a verse about that heifer and purification in the New Testament of the Bible, and it’s all about salvation.” The author then quotes Hebrews 9:13-14. The sacrifice of the red heifer is about Jesus, and Jesus is the endpoint of its fulfillment. Christian interest in the red heifer sacrifice is an affront to the finished redemptive work of Jesus Christ. Predictions of catastrophic judgments and financial chaos are always backed by alleged biblical evidences. Coupled with the coincidence of the Jewish Shemitah years as well as the ‘blood moon’ phenomena which have also recently been hyped, this message has unnecessarily confused and alarmed even many level-headed Christians. In fact, with the inclusion of historical evidences, even non-religious forecasters are joining the prediction circuit, resulting in the shock and alarm of many in the secular world as well, especially the financial industry.

The Bible mentions the details of the red heifer in Numbers 19. An “unblemished” red heifer, that is, a cow of a reddish color, with “no defect” that had never worn a yoke was to be taken outside the camp and sacrificed. Water was added to the ashes and applied to anyone who had contact with a dead body. This sacrifice required a cow, a female, to point out the life-giving element in the sacrifice. 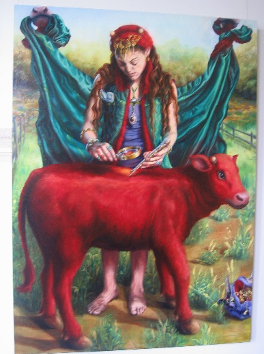 The red heifer sacrifice is like one of the oldest food laws in the Bible, the command against boiling “a kid in its mother’s milk” (Ex. 23:19; 34:26; Deut. 14:21). A kid could be boiled in the milk of another mother but not in its own mother’s milk. This is not a health regulation or a food regulation whereby meat and dairy can’t be mixed. It has deep theological significance. James B. Jordan writes in his book The Law and the Covenant:

How awful if the mother uses her own milk to destroy her own seed!… Jerusalem is the mother of the seed (Ps. 87:5; Gal. 4:26ff.). When Jerusalem crucified Jesus Christ, her Seed, she was boiling her kid in her own milk. In Revelation 17, the apostate Jerusalem has been devouring her faithful children: “And I saw the woman drunk with the blood of the saints and with the blood of the witnesses of Jesus.” Her punishment, under the Law of Equivalence, is to be devoured by the gentile kings who supported her (v. 17).[2]

These laws point to Jesus and His redemptive work and the end of the Old Covenant that was in full display when Jerusalem was sacked by the Romans in AD 70 and the temple system destroyed.

Don Preston makes an interesting observation of some of the other elements related to the red heifer sacrifice and how they point directly to Jesus and not to some end-time temple:

Jesus’ passion prayer occurred in Gethsemane on the Mount of Olives (Matthew 26:30) [where the red heifer sacrifice took place]. The entire heifer was to be consumed. Jesus gave himself completely in sacrifice. The ashes of the heifer were to be collected by one that was clean and stored in a clean place. Joseph of Arimathea, a devout man, collected Jesus’ body and placed it in a new tomb, one that had never been defiled (John 19:41). The heifer’s ashes were to be stored outside the city; Jesus’ body was laid in the tomb outside the city.

They took Jesus, therefore, and He went out, bearing His own cross, to the place called the Place of a Skull, which is called in Hebrew, Golgotha (John 19:17).

The heifer took upon itself the future uncleannesses caused by corpse contamination. Thus the heifer and its ashes became powerfully unclean, and are fountains of uncleanness. Yet, the sacrifice did not become effective until it was sprinkled upon an unclean person. Just so, Jesus was “made sin” for us, yet His sacrifice does not become effective until we are sprinkled with it (by faith, and symbolically by baptism). The only difference is that Jesus completed the task, and thus ceased to be unclean, while the heifer’s task was never done, and so the ashes remained unclean. (Studies in Food and Faith)

Consider how the book of Hebrews relates all animal sacrifices, including that of the red heifer, to the finished work of Jesus as the Messiah:

For if the blood of goats and bulls and the ashes of a heifer sprinkling those who have been defiled sanctify for the cleansing of the flesh, how much more will the blood of Christ, who through the eternal Spirit offered Himself without blemish to God, cleanse your conscience from dead works to serve the living God? For this reason, He is the mediator of a new covenant, so that, since a death has taken place for the redemption of the transgressions that were committed under the first covenant, those who have been called may receive the promise of the eternal inheritance (Heb. 9:13-15).

The Bible couldn’t be any clearer. Jesus is the fulfillment of the red heifer sacrifice. In fact, all the Old Covenant was in anticipation of Jesus as He Himself stated:

Notice that all sacrificial animals were to be “unblemished” and “without defect.” This requirement is not unique to the red heifer sacrifice:

Like so much of rabbinic oral tradition (Mark 7:1-13), several additional requirements have been added to the red heifer biblical inspection:

These requirements are not found in Numbers 19. If we take a man-centered approach to these laws, we might say that the purpose of this legislation is only to ensure human prosperity. Such an approach to the law of God misses the most basic point. These laws show us God's own genuine personal care for His world, and as such these laws cannot be altered by human whim. To be sure, the Bible is man-oriented, and thus obedience to these laws will improve human life; but the laws are God's, and cannot be changed by man.

There’s a legend that only “nine red heifers had been slain between the time of Moses and the destruction of the Temple” in AD 70.[3] It’s a legend. What many people don’t know is that today’s red heifer breeding is artificial “using imported frozen embryos of red Angus cows implanted into … domestic cows.” This artificial procedure negates the entire sacrificial history of Israel prior to the coming of Jesus as the Messiah. The red heifer sacrifice was common in Israel as were the other sacrifices that required the same sacrificial scrutiny.

Because Jesus is the fulfillment of all the sacrifices required under the Old Covenant, there is no need for a red heifer sacrifice today. For any Christian to suggest that there is significance to a red heifer today is to deny the “it is finished” (John 19:30) sacrifice of Jesus and the purpose of the book of Hebrews.

The end-time prophetic system that requires a rebuilt temple and sacrificial system is bad news for Jews living in Israel. According to this system, there must be another Jewish holocaust, since it is claimed that the great tribulation Jesus mentioned in Matthew 24:21 is not the worst tribulation, not even the slaughter of six million Jews during the holocaust. There must be another holocaust where two-thirds of the Jews living in Israel will be slaughtered (Zech. 13:7-9) as well as billions of people worldwide. Of course, Christians are said to escape this horror because they will be “raptured” out of here before these things take place. Red heifer mythology is all about the antichrist who will make a covenant with Israel and then break it. This will cause “The worst bloodbath in Jewish history.”[4]

What about the argument that the red heifer sacrifice is to be “a lasting ordinance both for the Israelites and for the aliens living among them” and “a perpetual statute”? (Num. 19:10, 21). It’s obvious that it hasn’t been for nearly 2000 years. That’s because the perpetuity of the red heifer sacrifice (like all the sacrifices) was fulfilled in Jesus, as the book of Hebrews states. Preoccupation with red heifers, a rebuilt temple, “the” antichrist (see 1 John 2:18, 22; 2 John 7), the slaughter of Jews, and the “rapture of the church” is last days prophetic mythology.

[3]Cambridge Bible for Schools and Colleges.