I received a message from a supporter who pointed me to a Glenn Beck interview with Amir Tsarfati’s and his new book Operation Joktan. Tsarfati was raised in a Jewish home but later converted to Christianity. He believes Ezekiel 38–39 are about modern-day Russia. His eschatology is dispensational. He claimed in the interview that there will be an end-time antichrist and a rebuilt temple. Anyone familiar with the NT knows that nothing is said about a rebuilt temple or the antichrist making a covenant with Israel and then breaking it. Even those who claim the temple is predicted to be rebuilt admit that there is no passage to support the claim.

Prophecy writers have been using Ezekiel 38 and 39 for centuries to make similar claims about what was going to happen in their day. David Cooper’s book from 1940 carried this title: When Gog’s Armies Meet the Almighty in the Land of Israel.Harry Rimmer’s The Coming War and the Rise of Russia was also published in 1940. Hal Lindsey’s The Late Great Planet Earth included a chapter on how Russia was the Gog of Ezekiel. I have a long-playing record of a message delivered by Jack Van Impe in 1969 about “The Coming War with Russia According to the Bible: Where? When? Why?”

The Gog and Magog prophecy describes an ancient battle fought with ancient weapons.

The God and Magog End-Time Alliance

Jet planes … missiles … and atomic weapons. You will search Ezekiel 38 and 39, and you will not find them. You will, however, find horses, bows and arrows, shields, clubs, and chariots. If the Gog and Magog prophecy was written for a time more than 2500 years in the future from Ezekiel’s day, why didn’t God describe the battle in terms that we could relate to and understand? Why confuse Ezekiel’s first readers and us?

The arguments for this view are way off base. The KJV reads “chief prince” (38:2, 3; 39:1), but others translated it as “prince of Rosh.” Ray Comfort, for example, wrote an article in 1991 where he argued, “without a doubt,” this refers to “modern Russia.” (The Hebrew word rosh means “chief” or “head” and has nothing to do with Russia. More about this below.) He then quoted Smith’s Bible Dictionary, Lange’s Commentary on Ezekiel (1865–1880), and the always “authoritative” New Scofield Reference Bible for support. Ray doesn’t offer any real exegetical or historical study of the topic. He’s relying on the works of others.

For centuries, commentators have tried to figure out the “when” and “who” of the fulfillment of the prophecy. In most cases, whoever the world power was at the time became the fulfillment candidate. Here are some examples:

The following chart from Francis X. Gumerlock’s book The Day and the Hour gives you some indication of how current events influenced the interpretation of the prophecy over the centuries: 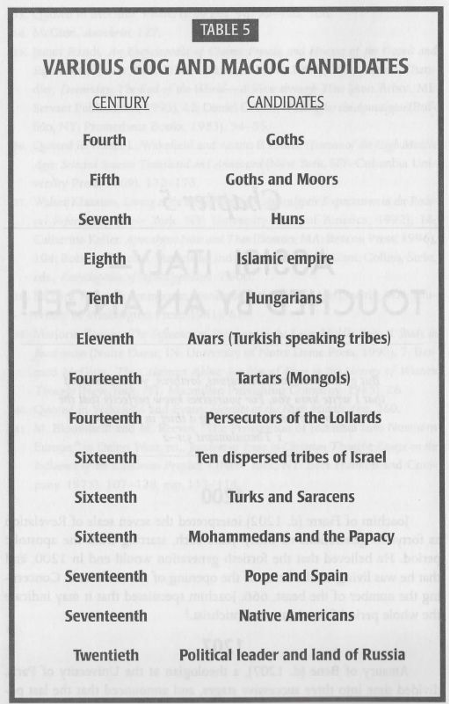 “Martin Buber’s novel For the Sake of Heaven, based on historical fact, is constructed around the conflict between the Hasidic masters on whether Napoleon was to be identified with Gog.”[3]

Comfort argues that the Ezekiel prophecy is about Russia and Iran and other current Middle East players. There is no mention of either Russia or Iran in Ezekiel 38 and 39. Finding Russia is based in part on the use of the Hebrew word rosh (ראש‎), a word that’s used more than 600 times in the Old Testament and is still in use today. The first word in Genesis 1:1 includes the word rosh (בְּרֵאשִׁ֖ית): “In the beginning…” At the “head” of time.

Here are Hengstenberg’s comments on the meaning of rosh: “Gog is prince over Magog, moreover chief prince, king of the kings over Meshech and Tubal, the Moschi and Tibareni (ch. xxvii. 13, xxxii. 26), who had their own kings, but appear here as vassals of Gog. Many expositors render, instead of chief prince, prince of Rosh, Meshech, and Tubal. But the poor Russians have been here very unjustly arranged among the enemies of God’s people. Rosh, as the name of a people, does not occur in all the Old Testament.”[4]

Benjamin Netanyahu was the “head” (ראש} or Prime Minister of the Israeli government as the podium shows: 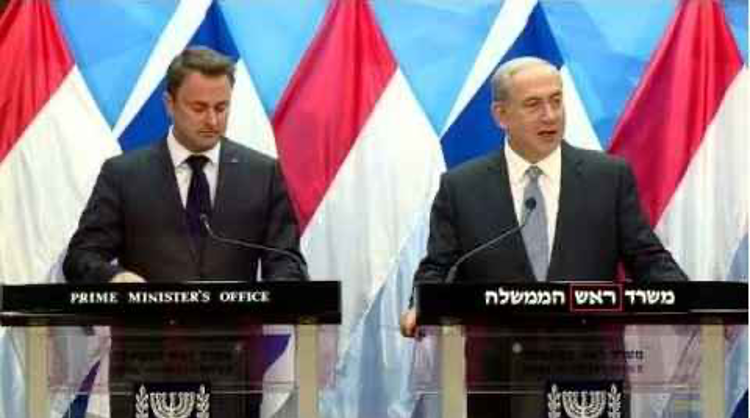 Charles Ryrie, the author of the Ryrie Study Bible, acknowledges that rosh is not a proper name: “The prince of Rosh is better translated as ‘the chief prince of Meshech and Tubal.’” Ryrie, like Comfort, was a dispensationalist, but he knew his Hebrew better than Scofield or Comfort.

Lange appeals to the Hebrew lexicographer Wilhelm Gesenius (1786–1842) but does not interact with other Hebrew scholars who disagreed with him in his day. I interact with Gesenius’ arguments in my book The Gog and Magog End-Time Alliance. 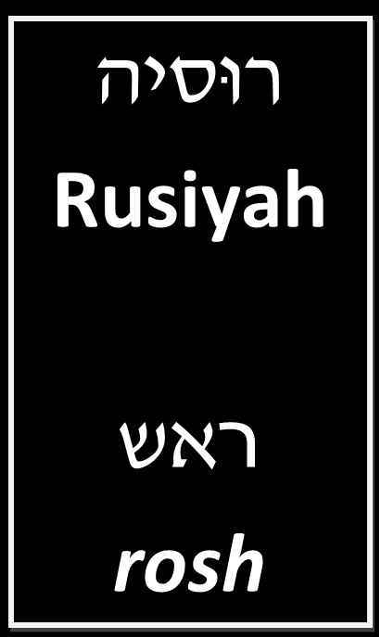 Daniel I. Block translates Ezekiel 38:3, “[Son of Man], set your face toward Gog, of the land of Magog, the prince, chief of Meshech and Tubal.”[5] Here is Block’s explanation:

[Rosh] is therefore best understood as a common noun, appositional to and offering a closer definition of [the Hebrew word] nasi [translated as “prince”]. Accordingly, the prince, chief of Meshech and Tubal, combines Ezekiel’s preferred title for kings with a hierarchical designation, the addition serving to clarify the preceding archaic term.[6]

Then there’s the problem with the weapons used in this supposed end-time war with Israel. They are ancient weapons — bows and arrows, spears, clubs, shields (Ezek. 39:9), and chariots (39:20). The claim is often made that God was revealing modern-day weaponry in terms that Ezekiel and the people of his day could understand. Bows and arrows are said to be missiles and rocket launchers. Horses are “horsepower.” Chariots are tanks. All of this from interpreters who claim to interpret the Bible literally.

Dispensationalists insist on interpreting prophecy literally, but not when it comes to Ezekiel 38 and 39. Hal Lindsey, author of The Late Great Planet Earth (1970), is well known for his claim that the locusts of Revelation 9:1–12 could be Vietnam-era “cobra helicopters.” He writes:

I have a Christian friend who was a Green Beret in Viet Nam. When he first read this chapter he said, ‘I know what those are. I’ve seen hundreds of them in Viet Nam. They’re Cobra helicopters! That may be conjecture, but it does give you something to think about! A Cobra helicopter does fit the sound of “many chariots.” My friend believes that the means of torment will be a kind of nerve gas sprayed from its tail.[7]

The way the so-called literalists interpret the prophecy, confuses everyone, the people in Ezekiel’s day and our day.

He claims this passage refers to modern-day Israel. Russia is one of the largest producers of gold. Why would Russia go all the way to Israel for cattle? The following is a description of the spoils the Israelites brought back from their period of captivity among the Babylonians and Medes and Persians: “Every survivor, at whatever place he may live**, let the men of that place support him with silver and gold, with goods and cattle**, together with a freewill offering for the house of God which is in Jerusalem” (Ezra 1:4).

This shows that the events of Ezekiel 38–39 refer to that time, not ours.

Notice that the Ezekiel prophecy describes a time when there were “unwalled villages” (Ezek. 38:11). Comfort mentions this. Today, Israel is a nation of walls. In the book of Esther, we see that there were Jews who were living in relative peace in “unwalled towns” (Esther 9:19, KJV) when Haman conspired against them. The Hebrew word perazah is used in Esther 9:19 and Ezekiel 38:11. It’s unfortunate that the translators of the New American Standard Version translate perazah as “rural towns” in Esther 9:19 instead of “unwalled villages” as they do in Ezekiel 38:11.

There’s much more I could say about this topic. See my book The Gog and Magog End-Time Alliance.

It’s obvious that Ezekiel is describing a future battle that was in Israel’s near future about 2500 years ago. The most likely fulfillment are the events surrounding the book of Esther. This often neglected book is filled with parallels to Ezekiel 38 and 39 and other Old Testament passages.

“One late manuscript to Esther 3:1 and 9:24 refers to Haman as a ‘Gogite.’”[8] Haman wanted to “destroy all the Jews, the people of Mordecai, who were throughout the whole kingdom of Ahasuerus” (Esther 3:6) but failed in the attempt. Haman (Esther 7) and his sons (9:10) were executed and the Jews rebuilt the temple and were reestablished as God’s covenant people. Even Haman’s name is mentioned in Ezekiel 39. A Crash-Course in Bible Prophecy