The first time I read through the NT, beginning with Matthew’s gospel in 1973, I came across passages like Matthew 10:23, 16:27-28, and 24:34 that did not fit the popular end-time views of the day. At the time, in the early 1970s, Hal Lindsey’s The Late Great Planet Earth (TLGPE) was a massive best seller. “Despite some dated content, 28 million copies had sold by 1990.” In an off-handed way (so as not to be labeled a date setter) Lindsey predicted that the so-called “rapture of the church” would take place before 1988. Here’s what he wrote more than 50 years ago in TLGPE:

The most important sign in Matthew has to be the restoration of the Jews to the land in the rebirth of Israel. Even the figure of speech “fig tree”’ has been a historic symbol of national Israel. When the Jewish people, after nearly 2,000 years of exile, under relentless persecution, became a nation again on 14 May 1948 the “fig tree” put forth its first leaves. Jesus said that this would indicate that He was “at the door,” ready to return.

Then [Jesus] said, “Truly I say to you, this generation will not pass away until all these things take place” (Matthew 24:34, NASB). What generation? Obviously, in context, the generation that would see the signs—chief among them the rebirth of Israel. A generation in the Bible is something like forty years. If this is a correct deduction, then within forty years or so of 1948, all these things could take place. Many scholars who have studied Bible prophecy all their lives believe that this is so.”[1]

Lindsey never mentioned any of these “many scholars.” The math was simple: 1948 (the year Israel became a nation again) + 40 (the number of years making a generation) = 1988. Johnny Cash sang a song about it in 1973: “Matthew 24 is Knocking at the Door.” In an interview published in Christianity Today on April 15, 1977, seven years after the publication of TLGPE and 11 years from the 1988 date, Lindsey told W. Ward Gasque:

“I don’t know how long a biblical generation is. Perhaps somewhere between sixty and eighty years. The state of Israel was established in 1948. There are a lot of world leaders who are pointing to the 1980s as being the time of some very momentous events. Perhaps it will be then. But I feel certain that it will take place before the year 2000.”

A 60-year generation would take us to 2008; a 70-year generation to 2018; an 80-year generation to 2028. Don’t be surprised if a generation is said to be 100 years. In the first edition of Tim LaHaye’s The Beginning of the End, which was published in 1972, he wrote, “Carefully putting all this together, we now recognize this strategic generation. **It is the generation that ‘sees’ the four-part sign of verse 7 **[in Matt. 24], or the people who saw the First World War. We must be careful here not to become dogmatic, but it would seem that these people are witnesses to the events, not necessarily participants in them. That would suggest they were at least old enough to understand the events of 1914-1918, not necessarily old enough to go to war.”[2]

Since the national reestablishment of Israel in 1948, countless books and pamphlets have been written defending the doctrine assuring readers that the rapture could happen at any moment. Some prophecy writers claimed it would take place before 1988. We are far removed from that date. Where are we in God’s prophetic timetable?

Some prognostications changed in LaHaye’s 1991 revised edition of The Beginning of the End. The “strategic generation” was modified significantly. It’s no longer “the people who saw the First World War”: “Carefully putting all this together, we now recognize this strategic generation. It is the generation that ‘sees’ the events of 1948. We must be careful here not to become dogmatic, but it would seem that these people are witnesses to the events, not necessarily participants in them.” The change from 1917 to 1948 gave LaHaye another fifty years before this new generation passes away.[3]

In that same 1977 interview, Gasque asked Lindsey: “But what if you’re wrong?” Lindsey replied: “Well, there’s just a split second’s difference between a hero and a bum. I didn’t ask to be a hero, but I guess I have become one in the Christian community. So I accept it. But if I’m wrong about this, I guess I’ll become a bum.” He didn’t become a bum. He continued to write books like The 1980’s: The Countdown to Armageddon that was published 52 years ago.

But as I read Matthew’s gospel and came across the three passages I listed above, I began to question Lindsey’s claims. It was hard to disagree with him since most people (and I was one of them) put their trust in others who write authoritatively. I was a very new Christians. Could millions of people who read Lindsey’s book be wrong? Yes! Why did Lindsey and so many others get it wrong? Why do prophecy writers still get it wrong?

They ignored the first principle of Bible interpretation: Let the Bible interpret the Bible. “this generation always means the generation of Jesus’ day. Time words like “near,” “shortly,” “at hand,” “quickly,” and “about to” are used consistently in the Bible and often. There are more than 100 time-frame indicators. Once the interpreter says, “It can’t mean this; it must mean this despite what I’m reading and seeing,” the game is over. Consider the following from George Eldon Ladd, a respected Bible commentator, on the use of time words in Revelation, none of which are unusual:

These events are “soon to take place” [1:1] (cf. 11:18; 22:10). These words have troubled commentators. The simplest solution is to take the preterist view and to say that John, like the entire Christian community, thought that the coming of the Lord was near, when in fact they were wrong. Our Lord himself seems to share this error in perspective in the saying: “This generation will not pass away before all these things take place” (Mark 13:30).[4]

Ladd gives away the store. That generation of Christians understood “near” to mean “near,” but they were wrong in the same way Jesus was wrong. But Jesus can’t be wrong, more conservative writers agree, so what is clear to the reader must be reimagined to fit an already agreed-upon end-time system that demands a repeated set of events and actions. A temple has to be rebuilt, animal sacrifices reinstituted, and another great tribulation that will result in the death of, not just millions of Jews living in Israel, but billions more around the world.

Here’s an example of how it’s been done. First, it was argued that the Greek genea is best translated as “race” as Scofield codified in a footnote in his The Scofield Reference Bible. This is an impossible translation (e.g., Matt. 1:17). Most prophecy writers have given up on this translation and logical absurdity. Now it’s “the generation that sees these signs will not pass away until all these things take place” even though Jesus told His present audience, “even so YOU too, when YOU see all these things, recognize that it is near, at the door” (24:33). What’s the “it”? Either the destruction of the temple, the tribulation, or the manifestation of the kingdom (Luke 21:31).

Others claim that what Jesus really meant was “this type of generation will not pass away until all these things take place.” The problem is in both cases, words must be added to Matthew 24:34 to get the desired meaning. If this is acceptable, then there is no telling what we can get the Bible to say and mean. We have a history of cults in the United States. They often begin by adding something so one of their pet doctrines has “biblical” support. Here’s an example from the JW’s unique translation of the Bible adding the word “other” to make Jesus a created being: 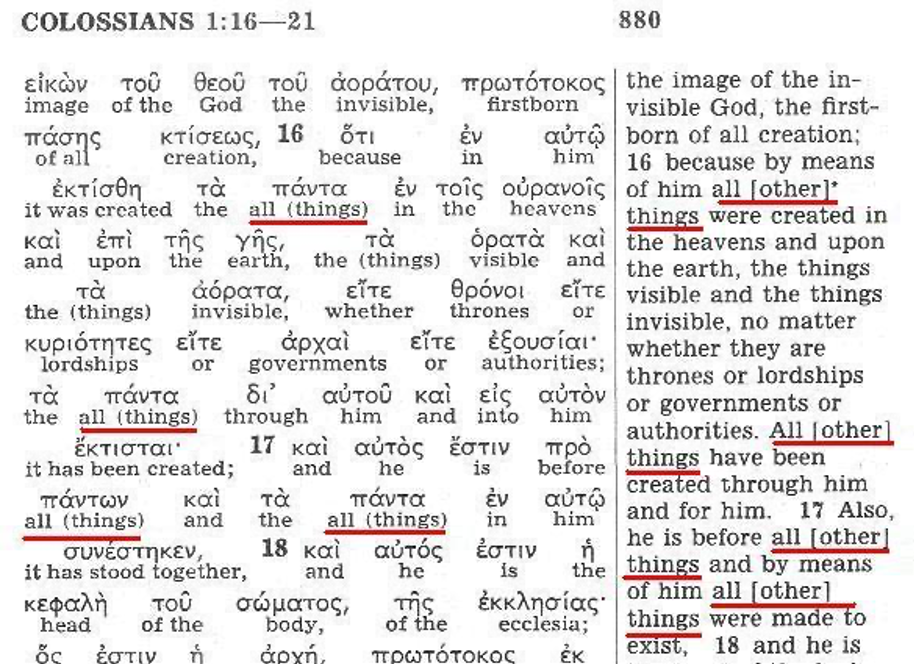 The seed idea for this article came about because of a comment I read on the Christian Post. By ignoring specific time indicators, the actual definition, number, and time of the many antichrists mentioned by John, the Bible reader is thrown off course because there’s a magnet in the cockpit affecting the compass needle. He’s headed north (the future) instead of south (the past) because time indicators are either ignored or they have been seduced by Ladd and others who argue that “[t]he problem is raised by the fact that the prophets were little interested in chronology, and the future was always viewed as imminent.”

The fourth kingdom, legs of iron are the kingdom of Satan, the angel of light. The iron of the feet is his son the angel, Apollyon who is responsible for killing Jesus. Genesis 3:15; Re 9:11. Apollyon, the angel, the son of Satan, is the anti-Christ, the beast from the bottomless pit that rises at the 5th trumpet as king of the locusts. It is he whose image is placed into the temple by the man, the clay of the feet, the false prophet. Anti-Christ rules for the last 42 months. The week of trumpets, the book in God’s right hand, Re 5:1, is Daniel’s 70th week. Da 9:24. It is 2520 days long. Seven 360-day lunar years.

There is no gap between the 69th and 70th weeks of Daniel’s 70-weeks-of years prophecy (490 years). [Jesus is “cut off” in the middle of the 70th week and the gospel goes exclusively to the Jews for the last 3.5 years of the seven-year final week]. The book of Revelation never mentions “the anti-Christ.” There were many antichrists in the first century. John wrote that these many antichrists (most likely apostate Jews: Rev. 2:9; 3:9) in his day were evidence that it was “the last hour” (1 Jn. 2:18), most likely a reference to the lead-up to the destruction of the temple and judgment on Jerusalem that Jesus predicted would take place before their (“this generation”) passed away (Mt. 24:34). The feet of iron mixed with clay refers to first-century Rome (iron) and Israel (clay) colluding against believers against Jesus that we see in the gospels — “We have no king but Caesar” (Jn. 19:15) — and the book of Acts. The sea beast (Rev. 13:1) and the land beast (13:11) join forces against the people of God in the first century. But iron and clay do not mix. The Romans eventually turned on the Jews, demolished their temple as Jesus had predicted (Mt. 24:1-2), took thousands captive, and destroyed their city. “For the days will come on you,” Jesus said, “when your enemies will build an embankment against you, surround you, and hem you in on every side” (Lk. 19:43). This is why Jesus said, “But when YOU see Jerusalem surrounded by armies, then recognize that her desolation is near. Then those who are in Judea must flee to the mountains, and those who are inside the city must leave, and those who are in the country must not enter the city" (Lk. 21:20-21).

Once the time indicators are dismissed as not being relevant or the assertion that “the prophets were little interested in chronology, and the future was always viewed as imminent,” interpreting Bible prophecy is open to fanciful speculation and eventually great doubt.