The battle for America is being fought on two fronts: In the courts and the universities. If these two institutions remain in the hands of liberals, reversing anti-Christian trends will take decades longer. The universities feed the law schools, the law schools corrupt the minds of impressionable law students, and the courts maintain the status quo. Our colonial founders understood that the garden of the nation grows from the seeds that are planted in its schools. Whoever controls the schools rules the world.

The sad thing is, Harvard has been contributing to the corruption. The latest example of the continued Christian capitulation of Harvard is the choice of its new head chaplain.

A surprising announcement … revived tensions between Harvard’s original mission and its more recent secular orientation. The association of more than 30 Harvard chaplains representing a wide range of religious communities elected Greg Epstein as their new leader. The surprise isn’t that Epstein is not a Christian, an element of Harvard’s heritage that the university hasn’t stressed for decades. It’s that he doesn’t believe in God at all.

What would be great is if Greg Epstein would put his atheist religion to the test by being strapped to the chair in Brian Godawa’s short film Cruel Logic and be forced to answer the implications of the atheist worldview devoid of God:

Harvard University was founded with one instructor and nine students to establish a school to train Christian ministers. The College was named after John Harvard (1607–1638) who was an English minister in Colonial America whose deathbed bequest was that the “school or College” would receive his library or more than 400 volumes, a very generous bequest since books were hard to come by in the colonies and expensive. As a result of the donation of his library and half of his estate, it was consequently ordered “that the College agreed upon formerly to be built at Cambridge shall be called Harvard College.”

If you’ve seen the film The Social Network, there’s a scene of a fraternity initiation rite that required pledges to recite the three lies about the statue of John Harvard that sits outside University Hall in Harvard Yard.

The first lie is that the statue of John Harvard is not of John Harvard since there was no official likeness — painting or engraving — of him. “In 1884, Daniel Chester French created the famous statue, and Sherman Hoar sat as a model for the head of John Harvard. Hoar later went on to serve as a member of Congress and a US district attorney.”

The second lie is that John Harvard did not found Harvard. While this is technically true, it could be said that he was a founder because it was his library and money from his estate that helped to build the school.

The third lie is that Harvard was not founded in 1638 but 1636 by a vote by the Great and General Court of the Massachusetts Bay Colony. This is why the statue is known as “The Statue of Three Lies.” The statue stands as a testimony to so many additional lies that have come out of our nation’s schools that are destroying the moral integrity of America.

In accordance with its original vision, Harvard adopted a set of “Rules and Precepts” in 1646 that stated the following (spelling has been modernized):

Let every student be plainly instructed, and earnestly pressed to consider well, the main end of his life and studies is, to know God and Jesus Christ which is eternal life (John 17:3) and therefore to lay Christ in the bottom, as the only foundation of all sound knowledge and learning. And seeing the Lord only gives wisdom, Let every one seriously set himself by prayer in secret to seek it of him (Prov. 2:3).

In 1692, Harvard adopted the motto Veritas Christo et Ecclesiae — “Truth for Christ and the Church.” The phrase appeared on a shield and can be found on many buildings around the Harvard campus and various dorms in Harvard Yard. 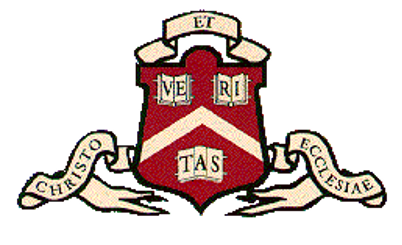 The books on the shield represent revelation and reason. The top two books that are shown face-up represent the Word of God revealed to us in the Old and New Testaments. The book on the bottom of the shield, which faces down, symbolizes the limits of reason and the need for God’s revelation. To the atheist, all the books are closed with no way of knowing anything with certainty.

A second and earlier (1650) Harvard motto carried the Latin phrase, In Christi Gloriam, “For the Glory of Christ.” Today, it’s all for the glory of man, woman, LGBTI+. 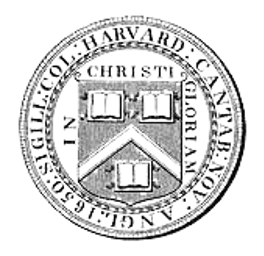 Samuel Eliot Morison, in his history of Harvard, writes, “Like the Medieval schoolmen, [the founders] believed that all knowledge without Christ was vain. Veritas to them … meant the divine truth.” If it were only true today.

Samuel Langdon was a colonial chaplain and pastor before being chosen as President of Harvard in 1776. In an Election Day address in 1775, Langdon spoke to the Massachusetts Provincial Congress and issued a warning:

We have rebelled against God. We have lost the true spirit of Christianity, though we retain the outward profession and form of it. We have neglected and set light by the glorious Gospel of our Lord Jesus Christ and His holy commands and institutions. The worship of many is but mere compliment to the Deity, while their hearts are far from Him. By many, the Gospel is corrupted into a superficial system of moral philosophy, little better than ancient Platonism…

My brethren, let us repent and implore the divine mercy. Let us amend our ways and our doings, reform everything that has been provoking the Most High, and thus endeavor to obtain the gracious interpositions of providence for our deliverance….

They have made a mock[ery] of our solemn fasts and every appearance of serious Christianity in the land… May our land be purged from all its sins! Then the Lord will be our refuge and our strength, a very present help in trouble, and we will have no reason to be afraid, though thousands of enemies set themselves against us round about.
May the Lord hear us in this day of trouble… We will rejoice in His salvation, and in the name of our God, we will set up our banners.

The warning was not heeded. Jesus Christ is only mentioned in Harvard’s history and that’s only because sandblasting would be too obvious of an overture of infidelity. Also, there’s a great deal of historical material pointing out Harvard’s Christian founding. It’s easy to ignore if you’re not looking for it or relegate Harvard’s religious founding to a superstitious era before the coming of Charles Darwin. The new AD (Anno Domini, “In the Year of Our Lord”) is “After Darwin.

If you consider the implications of Darwinism, “you are faced with a cold new world, stripped of souls and angels. Darwin’s universal acid eats up everything in its path: Human life and intelligence and free will originated from the random interactions of mindless forces. The creationists are right to fear ‘this view of life’ — it leaves nothing of God or Satan in its wake.”

The late Billy Graham “asked a recent Harvard president, ‘What is the biggest problem of college students today?’ The president answered with one word ‘emptiness.’ Unwittingly, he had offered an explanation for the rise of depression, sexual confusion, transmitted disease, drug use, binge drinking, pornography, and even suicide.”

Are we to believe that Greg Epstein’s atheism is going to fill the void? Based on what? Since all you are is “dust in the wind,” embrace the void. R.C. Sproul writes that “God’s existence is the chief element in constructing any worldview. To deny this chief premise is to set one’s sails for the island of nihilism. This is the darkest continent of the darkened mind — the ultimate paradise of the fool.”[1]

The former Harvard president went on:

How did our great universities become places of emptiness? They didn’t start off that way. Harvard, Yale, Dartmouth, Princeton, Northwestern and hundreds of other colleges were founded for students to pursue life of meaning and truth, to discover the fullness of life in Jesus Christ that we might advance his kingdom of love. Harvard’s particular vision and motto was “For Christ’s glory (In Christi glorium) and was later changed to “Truth, for Christ and the church” (Veritas Christo et Ecclesiae). To Harvard’s original founders, truth (veritas) wasn’t an abstraction or a nice word for T-shirts and diplomas, it was a person — the Life-Giver.

Truth, if the concept even exists, refers to nothing more than “the freedom to devote ourselves to any values we please on the mere condition that we don’t believe them to be true.”[2]