Facebook is not the place to find the best information and/or rebuttals to biblical content. The same can be true of the Internet in general. Here’s one I found interesting. When someone like the following person engages in personal attacks, be on your guard. You are about to be thrown a pile of theological manure passed off as food for thought. The following is so bad that I believe it’s necessary to warn you to stay away from Lance Conley’s posts and comments. They are not reliable or charitable: 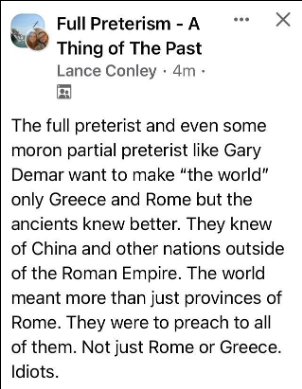 At least spell my name right; it’s not that hard. It’s a telling indicator of what follows in his “argument.” The above claim about the use of “world” is beyond simplistic and dead wrong. It looks like he copied the poor scholarship from someone else who passes himself off as an authority on all things Greek and theological. With research tools just a click away, it doesn’t take much effort to learn that there are two Greek words often translated “world” in most modern translations The more common one is kosmos (John 3:16) and the less common is oikoumenē. (The Greek word αἰών [aiōn] is sometimes translated as “world”: Matt 24:3 in the KJV.) It’s too bad some Bible translations don’t let readers know which word is being used. It can make a difference.

“The ancients knew better…” Of course they did, but how was oikoumenē used in the New Testament and how was it understood by those who first heard Jesus use the word, for example, in Matthew 24:14, Luke 2:1, 21:25-26, and elsewhere? Luke 2:1, where oikoumenē is used, is a key verse because it deals with political and geographial boundaries of taxation requirements. While the Roman government would have liked to have taxed the people in China, it had no political authority to do so.

It’s safe to assume that the use of oikoumenē in Matthew 24:14 was equally limited to the Greco-Roman world because this is where the Jews were scattered (Acts 2:5; James 1:1; 1 Peter 1:1), and the gospel was to go “to the Jew first” (Rom. 1:16). The gospel had to be taken to where the Jews were (Acts 1:8). We’re told the gospel had been “proclaimed throughout the whole kosmos” (Rom. 1:8) and to “all creation under heaven” (Col. 1:23). These two passages show that even words like kosmos and ἐν πάσῃ κτίσει (en pasē ktisei: “in all creation”) are often used for limited geographical areas. It’s no different from how we use the word “world” in everyday speech. See Chapters 1 and 2 in my book Myths, Lies, and Half-Truths.

Christianity's failure to show itself practical in the past 150 years has guaranteed the success of anti-Christian worldviews, which are doing incalculable harm. The rejection of any type of 'this-worldly' application of the Bible has resulted in the proliferation of man-centered worldviews that have steadily drained the life out of our world and left behind a spiritual vacuum.

The following is from Thayer’s Greek Lexicon on oikoumenē:

a. in Greek writings often the portion of the earth inhabited by the Greeks, in distinction from the lands of the barbarians, cf. Passow, ii., p. 415a; (Liddell and Scott, under the word, I.).

b. in the Greek authors who wrote about Roman affairs (like the Latinorbis terrarum) equivalent to the Roman empire: so πᾶσα ἡ οἰκουμένη [all the οἰκουμένη] contextually equivalent to all the subjects of this empire, Luke 2:1.

a. the portion of the earth inhabited by the Greeks, in distinction from the lands of the barbarians

b. the Roman empire, all the subjects of the empire

d. the inhabitants of the earth, men

2. the universe, the world

In A Greek-English Lexicon compiled by Henry George Liddell and Robert Scott we find the following:

The following is from Otto Flender’s article on “οἰκουμένῃ” in 3-volume The New International Dictionary of New Testament Theology (1:518-519), Colin Brown, General Editor:

[Oἰκουμένῃ] means the inhabited (earth) and was used (a) from Dem[osthenes] (4th cent. B.C.) on for the world inhabited by the Greeks in contrast to those lands inhabited by “barbarians”; (b) from Aristot[le], (4th cent. B.C.) on for the inhabited world, including the barbarian lands, i.e., settled, as opposed to unsettled; 9c) the Roman period (since the conquest of the East in the 2nd cent. B.C.) for the imperium Romanum—lands under Roman rule. In other words, what had originally been a geographical and cultural concept had become a political concept in the Roman period. The Emperor Nero was entitled sōtēr (saviour) and euergetēs (benefactor) of the οἰκουμένῃ….

The LXX uses the word 46 times … Throughout, the word means the inhabited world….

οἰκουμένῃ is found 15 times in the NT, mainly in Luke (8 times) and Rev. (3 times). It is used generally as in Hel[lenistic] popular speech meaning the inhabited world…. [But] the political and imperial usage predominate[s] [based on] Lk. 2:1. The Emperor Augustus ordered a census of the whole οἰκουμένῃ, i.e. that is, the territories over which he ruled…. In Acts 17:6 the preaching of the apostles is attacked as a political crime directed against the Emperor by men “who have turned the οἰκουμένῃ upside down.” Similarly in Acts 19:27 and 24:5 Paul is called a causer of trouble in the οἰκουμένῃ. In the latter passage he is accused of it before the roman governor.

We have to agree with M. Paeslack’s conclusion , that in the NT οἰκουμένῃ is “not the fellowship of Christians”—this is rather the ekklesia (—>Church)—“but the world of the heathen Graeco-RomanEmpire threatened by the powers of darkness…." This does not exclude the οἰκουμένῃ from being the field where the church is to labor. The οἰκουμένῃ is the sphere in which the church lives and which she claims for her Lord, who according to Heb[rews] has been brought into the οἰκουμένῃ as firstborn, and who therefore is its legitimate ruler. An inward-looking ecumenical attitude by the church is therefore a contradiction in terms….

Preaching the gospel to the oikoumenē of that day did not stop in AD 70 (Matt. 24:1-34), but the NT makes it clear that what Jesus predicted in Matthew 24:14 was fulfilled before that/their generation passed away. I dovote a chapter to how oikoumenē is used in the NT in my book 10 Popular Prophecy Myths Exposed and Answered. My research shows that other prominent Bible scholars agree with my interpretation over against the person who posted the above comment. If I’m a “moron” and an “idiot,” I guess the same goes for them.

Barbara Rossing, author of The Rapture Exposed: The Message of Hope in the Book of Revelation (Basic Books, 2004), and who does not have an eschatological axe to grind regarding preterism, writes the following:

“They are acting contrary to the decrees of the emperor [Καίσαρος/Caesar], saying that there is another king named Jesus” (Acts 17:6-7). In Cesarea [Latin for Caesar] the charge against Paul is that he is an agitator among all the Jews throughout the oikoumenē (24:5), while in Ephesus Paul is accused of disrupting the temple economy of the Ephesian Artemis “whom Asia and the oikoumenē worship” (19:27).[1] The location of these charges in major cities of the Roman Empire is indicative of their political context.[2]

Caesar was not the emperor of the whole wide world that would have included China! Caesar’s “decrees” were only fitting for the Roman Empire. By this time, the disciples were not in China or North America. Wiriya Tipvarakankoon offers a helpful summary of Rossing’s study of οἰκουμένῃ when compared to the Greek words γῆ (“earth”) and κόσμος (“world”):

Barbara Rossing surveys the use of the term in the Roman literature, ancient Greek literature, the Septuagint, and the New Testament. She concludes that οἰκουμένῃ may be used as a geographical term in the Septuagint since it was used as a synonym of γῆ (“earth”). However, for the Roman usage of the term οἰκουμένῃ in the first century BCE, Rossing agrees with Nicolet, who finds that “geographical claims about the οἰκουμένῃ were ‘essentially political.’” For example, in Polybius, Hist. 3.1.4, οἰκουμένῃ is used with the sense of “the dominion” of Rome.

For the use of οἰκουμένῃ in the New Testament, Rossing argues that the meaning of οἰκουμένῃ has been shifted from the geographical meaning in the Septuagint to a political meaning, especially in Revelation. For example, in Paul’s speech at the Areopagus in Acts 17, Rossing argues that the author attempts to avoid using οἰκουμένῃ positively as “God’s creation: ‘God who made the world [τὸν κόσμον]’” (Acts 17:24). But οἰκουμένῃ is used negatively when Paul mentions God’s judgment upon “the world” (τὴν οἰκουμένην; Acts 17:31).

She argues that in Revelation, οἰκουμένη has never been asserted as God’s creation. Rather it connotes only the negative sense, in relation to the Roman Empire. Rossing concludes that οἰκουμένη is portrayed rather as a realm supported by violence, a realm that has been deceived by Satan (12:9) and aligned with Rome and its kings for battle against God (16:14), a realm of future tribulation and judgment (3:10).” See Barbara R. Rossing, “(Re)claiming Oikoumenē? Empire, Ecumenism, and the Discipleship of Equals,” Walk in the Ways of Wisdom: Essays in Honor of Elisabeth Schüssler Fiorenza (ed. Shelly Matthews, Cynthia Briggs Kittredge, and Melanie Johnson-DeBaufre; New York: Trinity Press International, 2003), 74-82.[3]

Click here to read Part Two, where I show how oikoumenē has been translated and understood by Bible commentators.

In this book, DeMar tests your views and renews your zeal for the living truth. This is the most thoroughly documented and comprehensive study of Bible prophecy ever written! Last Days Madness will be your survival guide and spiritual compass to ensure you escape the paralysis of last days madness.

[1]“The word οἰκουμένη generally refers to the world of Hellenic culture — more or less the Roman Empire in the 1st century — and not all of mankind. It is sometimes translated as “inhabited earth”, but is maybe better translated as ‘empire’ (i.e. the Roman Empire). One verse that makes this sense of the word clear is Acts 19:27: that the temple of the great goddess Diana should be despised, and her magnificence should be destroyed, whom all Asia and the world [οἰκουμένη] worshippeth (KJV). Perhaps what is relevant is that in ancient times people were not as cognizant of distant lands as they are today, so that the extent of the Empire was essentially the same for them as the extent of the whole world.”

[3]The Theme of Deception in the Book of Revelation Bringing Early Christian and Contemporary Thai Cultures into Dialogue (Claremont, CA: Claremont Press, 2017), 42, note 19.