Some readers get upset any time I point out how modern-day prophecy writers misrepresent the Bible. My critics don’t seem to mind that Hal Lindsey has been wrong over the years in an area of study that has made his reputation and so much of Christendom has embraced as “gospel.” I’ve pointed out a number of these “miscalculations” in previous articles and books. It was amazing to see how people defended Lindsey even though I quoted Lindsey’s own words that he would be a “bum” if his 1948-1988 rapture scenario did not come to pass as he claimed it would.

In addition to predicting that the rapture would take place before 1988, Lindsey argued the Roman Empire would be revived: “I saw this coming in 1969, as I discussed in my book, ‘The Late Great Planet Earth.’”[1]

With so much prophetic material in the Bible—somewhere around 25% of the total makeup of Scripture—it seems difﬁcult to argue that an expert is needed to understand such a large portion of God’s Word and so many ‘experts’ could be wrong generation after generation. If God’s Word is a lamp to our feet and a light to our path (Psalm 119:105), how do we explain that not a lot of light has been shed on God’s prophetic Word and with so little accuracy?

In the same article, he argued that “10 nations out of the ruins of the Roman culture and people have arisen as the real power behind the European Union.”[2] He wasn’t the first to make this claim. In 1926, Oswald J. Smith wrote about a revived Roman Empire that he claimed was on the horizon. Smith was emphatic that “Ten nations, no more, no less, are to become allied and known as the Roman empire because Rome will be the centre, the capital, and it will be in Rome that the Emperor will reign.”[3]

Notice what Smith said about this revived Roman Empire: “Ten nations, no more, no less.” Today, the European Union consists of 27 nations. Smith and others of his time and before succumbed to “newspaper exegesis,”[4] the practice of interpreting the Bible though the lens of current events rather than allowing the Bible to interpret itself. This is not to say that what’s happening in Europe and in other parts of the world does not need to be scrutinized. The problem, as in the past, is to attach prophetic certainty to what is taking place.

I recently came across the book Antichrist and His Ten Kingdoms that was first published in 1917. Like most prophecy books that engage in newspaper exegesis, this book went through at least five editions as current events forced reevaluations with the rise of new supposed end-time bad guys. Similarly, often popular books that deal with “antichrist” do not stick with the biblical text. 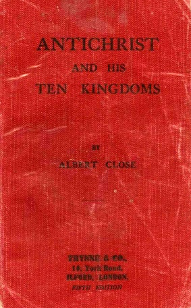 For centuries, theologians declared that the Papacy was the biblical antichrist, the man of lawlessness, and the beast all rolled into one. I have several books in my library that take this view. For example, Richard Hurd’s chapter “Prophecies Concerning Antichrist” in his book An Introduction to the Study of Prophecies Considering the Christian Church, and, in Particular, Concerning the Church of Papal Rome published in 1809 states:

It is admitted, that many predictions in the Old and New Testament, particularly in the book of Daniel, in St. Paul’s Epistles, and in the Revelations of St. John, clearly point out a very extraordinary power, which was to manifest itself in the latter times, that is, in the times subsequent to the introduction of Christianity.[5]

He gets some things right. He identifies “the last time,” or, “hour” as “the destruction of Jerusalem” that was “at hand, as indeed it followed very soon after the date of this Epistle” as John states in 1 John 2:18. So far so good because the biblical text demands such an interpretation. Hurd then goes on to argue that those first-century antichrists, those who did not “acknowledge Jesus Christ as coming in the flesh” (2 John 7), most likely the Judaizers that John described as the “synagogue of Satan” (Rev. 2:9; 3:9), as “types and forerunners of a still more dreadful power, which should be fully revealed in the latter times, in a future period when that calamity was passed.”[6] For Hurd and many others of his era, it was the Roman Catholic Church. John’s definition is very specific:

The Papal antichrist view dominated the Reformation writers. John Calvin was a noted exception. The participants of the “Westminster Assembly of Divines” wrote the Papal Antichrist view into its Confessional standards. The following is from the original version of the Westminster Confession of Faith (1646):

Chapter XXV: Of the Church

VI. There is no other head of the Church, but the Lord Jesus Christ;[a] nor can the Pope of Rome, in any sense, be head thereof; but is that Antichrist, that man of sin, and son of perdition, that exalteth himself, in the Church, against Christ and all that is called God.[b]

Did you notice that the Bible passages that use the word “antichrist” are not listed?: 1 John 2:18, 22; 4:1-6; 2 John 7. When American Presbyterians adopted the Westminster Standards in 1789, they made some changes. One of them was the section on the Pope and the Church of Rome as the antichrist. The revised section reads: “There is no other head of the church but the Lord Jesus Christ. Nor can the pope of Rome, in any sense, be head thereof.” There is a great deal of false doctrine in the Roman Catholic Church.

Too often we read current conditions into the Bible to make the Bible fit our circumstances instead of studying the Bible to learn how the first readers and hearers (Rev. 1:3) would have understood it. The application of the Bible is universal and timeless. You don’t need specific Bible passages of an eschatological nature to figure what’s evil. For many centuries, prophetic speculators have linked prophetic passages to what was taking place in their day and thereby assuring people that the end in some way was near for them.