In my 2020 debate with Kent Hovind, the topic of Daniel’s 70-weeks-of-years prophecy in Daniel 9:24–27 came up. Like all futurists like Hovind who hold to a rapture during a seven-year interval in which supposedly the antichrist shows up and makes and breaks a covenant with Israel, the temple is rebuilt, and the Great Tribulation takes place, includes a parenthesis after the 69th week (483 years). According to this view, the prophecy clock stopped after the completion of 483 years and won’t start again until sometime in the future. Pre-tribulationialists believe the so-called rapture of the church occurs before the 70th week that consists of the final seven years of the 490 years while post-tribulationialists claim the rapture of the church takes place after the final seven years. The five rapture positions (pre, mid, post, pre-wrath, and post) depend on the gap between the 69 weeks-of-years and the final seven years. See my book The Rapture and the Fig Tree Generation for a comprehensive critique of the rapture.

During the next 3.5 years, the gospel is preached to Israel (Acts 2:5, 37–42) since the 70 years are about Israel. This final half of the 70th week was nearly at its end when “some men from what was called the Synagogue of the Freedmen, including both Cyrenians and Alexandrians, and some from Cilicia and Asia, rose up and argued with Stephen” (6:9) after he performed “great wonders and signs among the people” (6:8).

Here are Stephen’s last words before he was stoned to death by the religious leaders including the high priest (7:1) with Saul “in hearty agreement with putting him to death”(7:54–8:1):

You stiff-necked people with uncircumcised hearts and ears! You always resist the Holy Spirit, just as your fathers did. Which of the prophets did your fathers fail to persecute? They even killed those who foretold the coming of the Righteous One. And now you are His betrayers and murderers—you who received the law ordained by angels, yet have not kept it (7:51–53; cp. Matt. 23:31–36).

This was not enough for Saul and the religious leaders as Saul continued to persecute the church “going from house to house” where “he dragged off men and women and put them in prison” (8:3) and continued “breathing threats and murder against the disciples of the Lord” with the full support of the priestly establishment (9:1–2). Soon after, Saul had his Damascus Road encounter with Jesus, and Jesus tells Ananias that Saul is His “chosen instrument … to bear My name before the nations and kings and the sons of Israel” (9:15). In my opinion, this was the end of the 70 weeks-of-years prophecy: to the Jew first and then the nations without excluding the Jews. It took a vision and words from God to make this point clear to Peter in Acts 10–11:18. There was no longer a redemptive difference between the nations and Israel (see Ephe. 2).

Inserting a gap between the 69th week and the 70th week allows premillennialists of all types to conjure up an end-time antichrist, a rebuilt temple, and a covenant made and broken with Israel by the antichrist. Much of the support for this view hinges on the identity of the words “prince” in Daniel 9:26 and “he” in 9:27. For someone like Kent Hovind, this problem is easily solved if one looks at the original typeset version of the King James Bible. In our debate, I did not have the opportunity to raise this point since he admitted that Daniel 9:24–27 is difficult.

But if the original KJV is authoritative, then it becomes necessary for King James Only advocates to explain each occurrence of “Prince” in Daniel 9:25–26 are capitalized along with “Messiah” lit. “anointed”): verse 25, “Messiah the Prince; in verse 26 it’s “Messiah” and “the Prince that shall come.” Are there two princes? Not if each time “Prince” occurs it’s capitalized. While Hebrew does not have any uppercase letters, the KJV translators believed there was one “Prince,” and that single “Prince” was Messiah. 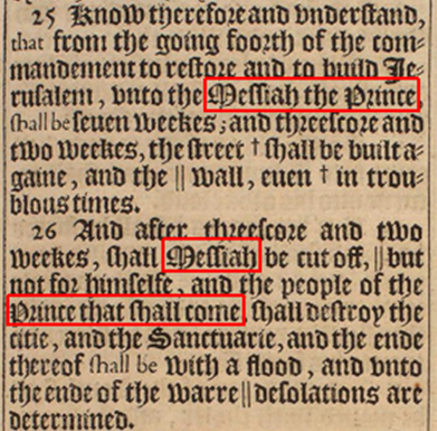 Dispensationalists claim “the prince” in verse 26 is the antichrist and is not the same as “Messiah the Prince” mentioned in verse 25. But based on the capitalization of “Prince” in 9:25–26, the KJV translators considered them to be the same person.

Because “Prince” is capitalized by the KJV translators the significance of the identity of “he” (“hee”) in verse 27 is inconsequential whether the antecedent is “Messiah” or “Prince” since according to the translators they are the same person. 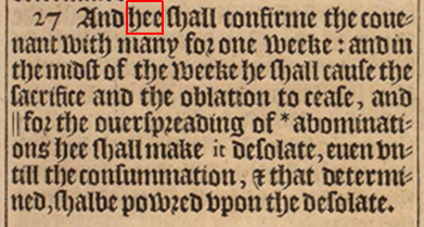 The debate occurs when many current translations do not capitalize “Prince” in the phrase “the people of the prince who is to come.” As a result, this leads many (most?) King James Only advocates to conclude that there are two princes: Messiah the prince and the other “prince” being the antichrist even though the same Hebrew word is used (נָגִיד/nagid) for both.[1]

Grammatically speaking, however, the closest antecedent to “he” is “Messiah” not “prince,” the object of the presuppositional phrase “people of the prince.” For a comprehensive study of this important grammatical issue of the identity of “he” in verse 27, see Stephen M. Thurstan’s book The People of the Prince, The Coming One!: An Exposition of Daniel 9:26 and other Novelties.

Furthermore, God makes firm covenants, something Jesus did at the Last Supper.

By the way, the KJV does not capitalize pronouns referring to deity, thus, we can’t know to whom the original translators regarded the second person singular pronoun based on the “he” (“hee”) in verse 27.

The following is a more readable version of the original translation work of the King James translators and editors: 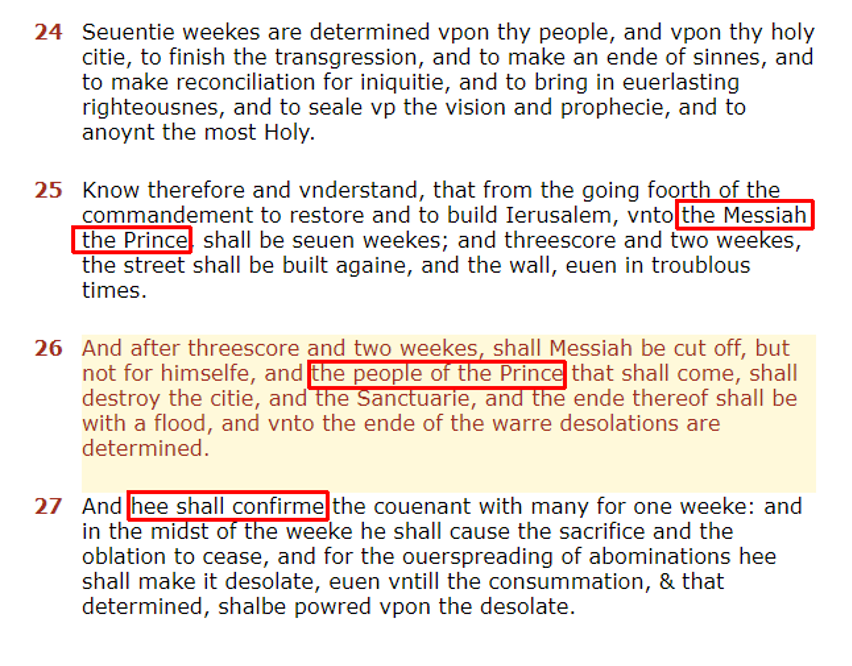 The Rapture Debate (with Kent Hovind)

On January 21, 2020, Kent Hovind and Gary DeMar debated Daniel 9. Among other things, they discuss the rapture, the church age, the difference between Jews and the church, and many other standard dispensationalist interpretations of Bible prophecy.

[1]Some suggest that the “prince” in 9:26 is a human: “After the sixty-two weeks Messiah [Jesus] shall be cut off, but not for Himself; and the people [Roman troops in AD 70] of the prince who is to come [Titus, a Roman general and prince] shall destroy the city and the sanctuary. The end of it shall be with a flood, and till the end of the war desolations are determined.” This end-time scenario was predicted by Jesus in Matthew 24, Mark 13, and Luke 21 when He prophesied that the temple would be destroyed before that (their) generation passed away.