Please consider a year-end donation to keep articles like this one coming in 2023.

But don’t you dare quote passages about the evils of abortion and same-sex relationships. That, as some once-Christian nations rule, is most likely going to be a “hate crime.”

Democrat Senator Rev. Raphael Warnock attacked Republican senators who passed the Tax Cuts and Jobs Act of 2017 claimed their vote was a “vicious and evil attack on the most vulnerable people in America” and compared the tax cuts to Herod who was “willing to kill children” to preserve wealth and power. He failed to mention that it was a tax edict that sent Joseph and a pregnant Mary to leave their home and livelihood and register for a tax (Luke 2:1). Let’s not forget the despised tax collector Zaccheus who used his position to rob the people in the name of some new government program to solidify the power of the Roman government to oppress the people. The Maker vs the Takers

A close reading of the Gospels, taking history and archeology into account, demolishes the myth of a socialist Jesus. Reading the Gospels in light of archeology and history, which are now available to us, gives us a very different picture than the one you’ve been told regarding what Jesus taught about work and money.

Jesse Jackson was one of the first Leftists to turn Joseph and Mary into a “homeless couple” when he claimed that Christmas “is not about Santa Claus and ‘Jingle Bells’ and fruitcake and eggnog,” of which all Christians would agree, but about “a homeless couple.” (As reported in The Atlanta Journal/Constitution (December 28, 1991), A9.) He repeated his “homeless couple” theme at the 1992 Democratic Convention.

Like seasonal clockwork, some have tried to make Jesus, Mary, and Joseph into a refugee family since refugee wokeness is the new cause célèbre. The first item I saw was this: “If only we had a seasonally appropriate story about Middle Eastern people seeking refuge being turned away by the heartless.”

Homeless Jesus, also known as Jesus the Homeless, is a bronze sculpture by Canadian sculptor Timothy Schmalz depicting Jesus as a homeless person, sleeping on a park bench.

Searching the Scriptures daily to see if these things are so is a lost art (Acts 17:11).

It’s shocking to learn how ignorant people are about the Bible. Joseph and Mary were neither homeless nor refugees. Mary went to live with her cousin Elizabeth upon hearing about her pregnancy and “stayed with her about three months, and then returned to her home” (Luke 1:56). Presumably, her parents owned a home and did not throw her out when they learned of her unusual pregnancy with an unbelievable story since she was welcomed back home.

An edict from the centralized Roman government forced Joseph and Mary to spend money and time to return to their place of birth to register for a tax (Luke 2:1-7). Their place of birth—Bethlehem—was in Israel which was occupied by the Romans. Who knows how much business Joseph lost because of the trek to satisfy a government edict.

Typical of governments that make laws without considering the consequences, there was not enough housing for traveling citizens (Luke 2:1).

The fact that “there was no room in the inn” (a disputed translation: see below) (Luke 2:7) did not make them homeless any more than a family that takes a trip is by definition homeless if they encounter “No Vacancy” signs.

The best of what was available was offered to Mary and Joseph. They weren’t told to go back home. No one stopped them from entering Bethlehem. There is nothing in the text that shows they were treated harshly.

A recent study by Stephen Carlson makes the case (a compelling one, I think) that the Greek word normally translated as “inn” (καταλύματι) in Luke 2:7 is best translated as “place to stay.” So the passage isn’t saying there was no room in the inn, but rather there was no room for baby Jesus in the place they stayed. In what place were they staying? Carlson argues it was probably in the home of Joseph’s family in Bethlehem, perhaps in an adjacent guest room (which would have been small).

Sometime later, the Wise Men came “into the house” where Jesus was “with Mary His mother” (Matt. 2:11). It’s possible the couple and returned to Nazareth by this time. Joseph was warned to escape from the treachery of Herod by going to Egypt.

[A]n angel of the Lord appeared to Joseph in a dream and said, “Get up! Take the Child and His mother and flee to Egypt and remain there until I tell you; for Herod is going to search for the Child to destroy Him.” So Joseph got up and took the Child and His mother while it was still night, and left for Egypt. He remained there until the death of Herod. This was to fulfill what had been spoken by the Lord through the prophet: “OUT OF EGYPT I CALLED MY SON” (Matt. 2:13-5; Hos. 11:1).

In this season of Christmas as Christians around the world celebrate the birth of Jesus, it is important to remember the journey Jesus, Mary, and Joseph traveled. Their journey is recounted in the Gospel of Matthew where Mary and Joseph flee Judea for Egypt fearing Jesus would be murdered by King Herod. That journey, in an effort to save the life of Jesus, makes clear they were refugees.

Second, there was a large Jewish population in Egypt in the first century. “In Josephus’s history, it is claimed that, after the first Ptolemy took Judea, he led some 120,000 Jewish captives to Egypt from the areas of Judea, Jerusalem, Samaria, and Mount Gerizim. With them, many other Jews, attracted by the fertile soil and Ptolemy’s liberality, emigrated there of their own accord. An inscription recording a Jewish dedication of a synagogue to Ptolemy and Berenice was discovered in the 19th century near Alexandria. Josephus also claims that, soon after, these 120,000 captives were freed of their bondage by Philadelphus.” (Wikipedia)

This isn’t much different from companies like Goldman Sachs and Tesla leaving the high tax states of New York and California for the low tax states of Florida and Texas. Are they refugees because they are leaving oppressive regulatory and taxing states?

Third, the angel could have warned Joseph to go to other parts of Israel where Herod had no jurisdiction, except that there is the typological significance for Jesus being “called out” of Egypt. Peter J. Leithart’s comments explain Israel’s reversal of fortune and why Joseph was commanded to go to Egypt. You see, Israel had become the new Egypt (Rev. 11:8):

All along the way, the exodus gets reversed, inverted, subverted, turned inside out and on its head. The murderous king is not an Egyptian Pharaoh, but Herod, “King of the Jews.” The threatening land is not Egypt, but Israel. And the land where the Son finds safety is not Israel but Egypt. The new Moses comes to deliver His followers not from Egypt but from an Israel that has become no better than Egypt.

Fourth, there is a second part of the command given by the angel. They were to remain in Egypt until the angel told Joseph it was safe to return. After the death of Herod, they returned to Israel and avoided Judea because another Herod was ruling there. How many aliens and refugees return to their home nations after entering the United States?

Fifth, from Nazareth to Bethlehem, to Egypt, and back to Nazareth, Jesus, Joseph, and Mary never left the Roman Empire.

Sixth, let’s assume that Egypt was an independent nation at the time and not under the authority of the Romans. Does anyone believe that its leaders would not have protected its border if 10,000 Israelis demanded entry?

Seventh, it’s possible that Joseph and his family were scrutinized by Roman officials in Egypt. Since Joseph had a marketable skill as a τέκτων (tektōn), artisan/craftsman/carpenter (Matt. 13:53-55), he was permitted to stay.

Eighth, “In all reality, Jesus was most likely born in a house. Many assume that Jesus was born in some sort of stable, where animals were kept. However, in the time of Jesus, humble folks lived with their animals. According to ancient Near East culture expert, E.F.F. Bishop notes the the arrangement of people and animals: ‘One of the Bethlehem houses with the lower section provided for the animals, with manger “hollowed in stone,” the dais [or raised area] being reserved for the family. Such a manger being immovable, filled with crushed straw, would do duty for a cradle. An infant might even be left in safety, especially if swaddled, when the mother was absent on temporary business’ (Jesus of Palestine, p. 42).” 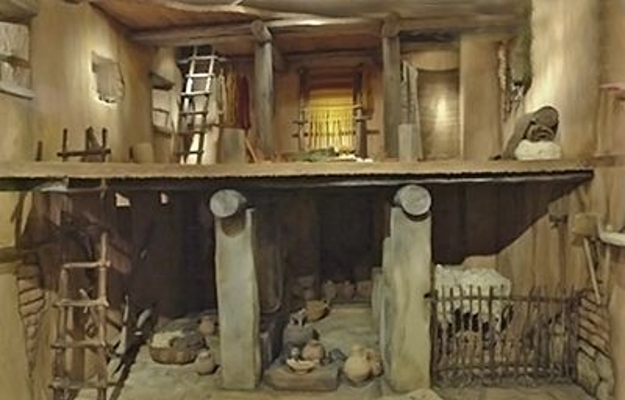 The modern refugee question is not about whether the United States should permit refugees to enter. Some type of “shibboleth” (Judges 12:1-6) is needed to weed out terrorists, gangs, sex traffickers, and drug smugglers.

In addition, there needs to be an overhaul of our welfare system, not just for immigrants and refugees but for all Americans.

From the founding of the colonies to the declaration of the Supreme Court, America's heritage is built up on the principles of the Christian religion. And yet the secularists are dismantling this foundation brick by brick, attempting to deny the very core of our national life. You weigh the evidence. Consider the facts which are being systematically erased from our nation's memory.