Maybe it’s just me, but I am starting to come to the conclusion that Nancy Pelosi just doesn’t like former President Donald Trump. She seems to have been the driving force behind Trump Impeachment II.

Impeachment is a Constitutional provision potentially to remove a sitting president. But, of course, now Trump is a private citizen. Where is the Chief Justice? He is supposed to preside over a legitimate impeachment hearing. But Roberts did not want to have anything to do with this farce.

Kentucky Senator Rand Paul says, “The Constitution says two things about impeachment—it is a tool to remove the officeholder, and it must be presided over by the Chief Justice of the Supreme Court.”

Instead, notes Paul, this is an act by “hyper-partisan Democrats” who have a “deranged hatred” against the former president. He adds that they are “wasting the nation’s time.”

Did the president receive due process during the House trial against him a couple of weeks ago? No, says John Eidsmoe, constitutional attorney and author. The Biblical Principles of the U.S. Constitution

Now over 220 years old, the U.S. Constitution of 1787 is still the highest law in the land, and has outlived the constitutions of all other countries. Its longevity rests in the enduring principles upon which it was founded. The American Founding Fathers understood that biblical law provides for the most suitable form of civil government any country can muster. The Founders forged into the America's legal documents and civil institutions biblical principles that have stood the test of time even to this day.

Eidsmoe wrote an open letter to the Senate: “As an attorney and law professor who has practiced and taught Constitutional Law for many decades, I strongly oppose the proposal to impeach and convict President Donald J. Trump and bar him from holding public office.”

Eidsmoe’s reasons include that the charges are factually baseless. For example, Trump is being accused of causing an insurrection because he held a rally in D.C. on January 6th, outlining once again why he thought the election was stolen.

The former president told his supporters at the rally: “We have come to demand that Congress do the right thing and only count the electors who have been lawfully slated. I know that everyone here will soon be marching over to the Capitol building to peacefully and patriotically make your voices heard." [Emphasis added]

It is important to note that the breach of the Capitol had already begun before Trump even told his followers to “peacefully” go over there (about a 25-minute walk away). He didn’t say anything about violence, vandalism, or mayhem. He wasn’t leading an Antifa rally or the like.

What is happening in our country is a nightmare our first president warned about—factionalism taking over.

George Washington, issued some parting wisdom in his Farewell Address, printed in newspapers beginning September 19, 1796. The U. S. Senate Historical Office has posted the Farewell Address.

They note: “He believed that the stability of the Republic was threatened by the forces of geographical sectionalism, political factionalism, and interference by foreign powers in the nation’s domestic affairs. He urged Americans to subordinate sectional jealousies to common national interests. Writing at a time before political parties had become accepted as vital extraconstitutional, opinion-focusing agencies, Washington feared that they carried the seeds of the nation’s destruction through petty factionalism.” [Emphasis added].

In his day, there were not the fully developed political parties as we’ve seen in America since. If you had to categorize him party-wise, he would have been a Federalist, in contrast with the Democrat Party (initially the Republican Democrat Party, just to confuse things) that arose with Thomas Jefferson and New Yorker Aaron Burr, later a traitor to America.

Here’s what Washington said in the Farewell Address, regarding putting party-loyalty above country-loyalty:

The alternate domination of one faction over another, sharpened by the spirit of revenge natural to party dissension, which in different ages and countries has perpetrated the most horrid enormities, is itself a frightful despotism. But this leads at length to a more formal and permanent despotism. The disorders and miseries which result gradually incline the minds of men to seek security and repose in the absolute power of an individual; and sooner or later the chief of some prevailing faction, more able or more fortunate than his competitors, turns this disposition to the purposes of his own elevation on the ruins of public liberty. 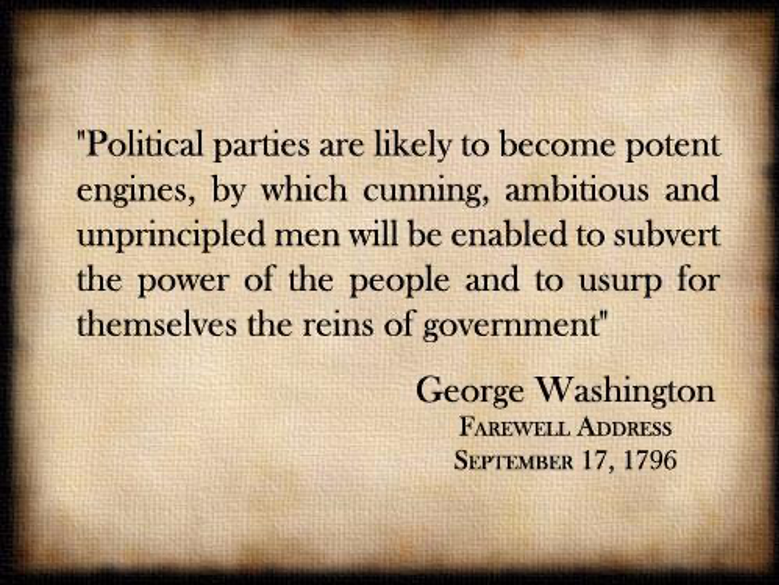 Public liberty today is at risk because of the rise of the petty factionalists. Gary Bauer points out that in recent times both Senate Leader Chuck Schumer and House Speaker Nancy Pelosi are on record potentially inciting violence—far more than Trump’s remarks to “peacefully and patriotically make your voice heard.” For example, Pelosi said, “I just don’t even know why there aren’t uprisings all over the country” against Trump.

Meanwhile, Trump’s legal team wrote a letter, explaining why he was not going to appear to testify in person at this week’s sham impeachment hearing. Their February 4, 2021 letter closes: “The use of our Constitution to bring a purported impeachment proceeding is much too serious to try to play these games.” I think George Washington would agree.