I saw the following post on Facebook by a woman who identifies as a Christian. It’s typical of the barely literate when it comes to the Bible: “Jesus said absolutely nothing about homosexuality.” Following this line of argument, that if Jesus didn’t say it, it’s not a law, one could claim that tripping blind people, rape, pedophilia, cannibalism, not having a fence around an open pit or roof, kidnapping, perjury, or any number of other prohibitions are now permitted because Jesus never condemned them. This is a weak and naïve argument that falls apart at first glance. To be sure, she is no Berean (Acts 17:11) or spirit tester (1 John 4:1).

When someone uses the words “absolutely nothing,” you know they are pulling arguments out of thin air. Jesus did say something about homosexuality by saying that the Jews had the “law and the prophets” (which condemn homosexuality) and defining marriage as between a man and a woman (Matt. 19:4-6). This means that Pete Buttigieg who currently serves as the United States secretary of transportation and Chasmen Glezman are not married in terms of a creational view of marriage. They are in a fictional marriage relationship like people who marry bridges, dogs, Ferris wheels, household items like a chandelier and duvet, and themselves (sologamy or autogamy is marriage by a person to him or herself). Consider the following:

Noorul Mahjabeen Hassan identifies as an Objectum Sexual - which means she is attracted to objects. She said she’s been in a relationship with a calculator she named Pierre and admits she has also felt attracted to monorails, iPods and a GPS system. The 20-year-old, who likes to be known as Fractal Tetris Huracan, surrounds herself with Tetris-shaped objects in her room. She said she now plans to marry the game when she graduates from the University of Florida.[1] (source)

By the way, love’s got nothing to do with legitimizing these marriages. We love all kinds of people and things. That doesn’t give us the right to marry them or engage in a sexual union with them. If a person or persons want to pretend to marry an object, there is nothing anyone can do about it. But once it is determined that the courts can define and redefine such relationships and then codify them into law, there is no end to the absurdities and legal battles.

Millions of Christians, sadly, have not recognized the continuing authority of God's law or its many applications to modern society. They have thereby reaped the whirlwind of cultural and intellectual impotence. They implicitly denied the power of the death and resurrection of Christ. They have served as footstools for the enemies of God. But humanism's free ride is coming to an end. This book serves as an introduction to this woefully neglected topic.

Also, the anatomy is all wrong. When a man (not a woman who identifies as a man) can conceive and give birth (be fruitful and multiply—a creation command—something that homosexuals cannot do), then there might be support for same-sex relationships in terms of biology and anatomy. But it’s an impossibility. This empirical evidence of anatomy adds to the biblical testimony.

Whitney Kay Bacon is a Christian who in her own eyes is married to a woman, a marriage that is no more valid or reasonable than the Australian woman who married a bridge in France. She has written an article for the Huffington Post: “So Gay Marriage Biblically Offends You? Then You Should Read This…” Here’s the crux of her argument:

“If the sole reason you feel that gay marriage is wrong because it’s a sin, and the Bible tells you this is wrong, then I sure as hell hope you don’t have bacon with your eggs or indulge in shrimp. Oh, or better yet, do you have any tattoos? Ever been drunk, told a white lie or been divorced? Yep, whoops. Those are all sins, too. And all sins are equal, right? I don’t see anyone going off the handle because of any of these ‘sins’ and I most certainly don’t see protests or hurtful propaganda against those.”

These are old arguments that have been answered numerous times. It’s a bit disingenuous of her not to point out how these arguments have been dealt with over the decades. She’s counting on the ignorance of her audience not to offer a substantive rejoinder.

Her operating assumption is that “all sins are equal.” They are not. Property crimes were punished with restitution, not capital punishment. Giving false testimony in a criminal case (Deut. 19:16-19) is a greater sin than a so-called “white lie.” There is the concept of “greater” commandments” (Matt. 23:23). Jesus criticized the Pharisees for “neglecting the weightier provisions of the law: justice and mercy and faithfulness.”

“Cuts (in the flesh, Lev. 19:28; 21:5; Jer. 48:37) unnatural disfigurement of the body is prohibited by Moses and seems to refer to the scratching of the arms, head, and face, common in times of mourning among the people of the East. The law gave the further prohibition: ‘Nor make any tattoo mark on yourselves’ (Lev. 19:28), a custom among the savage tribes, and still seen in Arabia. This prohibition had reference to idolatrous usages but was intended to inculcate upon the Israelites a proper reverence for God’s creation.

What about the shellfish and bacon prohibition argument? First, eating forbidden foods meant that a person was ritually unclean, similar to the way a person who touched a dead body (Num. 19:11-13). There is no civil penalty for eating unclean foods (Lev. 11:8). Such prohibitions were in a different category of sins and for a stated purpose. Abraham was not forbidden to eat shellfish or what we know today as bacon. 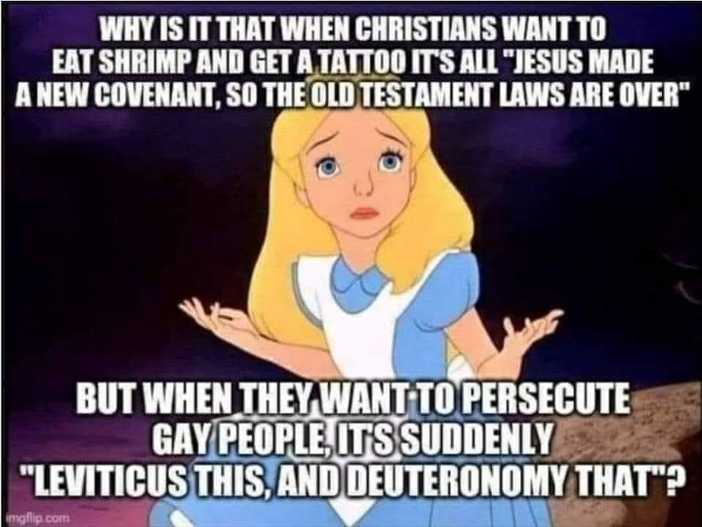 Unclean foods were designated by God to represent the nations. The nations were considered unclean. Israel was reminded of this with certain food prohibitions. Israel was to be a model for the nations, not the other way around (Deut. 4:5-9).

When we get to the New Testament, the nations are no longer to be thought of as “unclean” (Acts 10:13–15). Even if eating these foods was still prohibited (although see Mark 7:14-23), the punishment for doing so is wholly ecclesiastical and carries no civil punishment.

Homosexuals argue that since Leviticus 18:22 and 20:13 are part of the “Holiness Code,” and this Code also prohibits eating certain foods, planting two different kinds of seed in the same field, and wearing garments with different kinds of yarn, therefore homosexuality is like these particular laws. Since these laws no longer apply because they find their fulfillment in the redemptive work of Christ, so the argument is made, then we can conclude that the prohibitions regarding homosexuality no longer apply since they are in the same Code.

Following this line of argument, the same Holiness Code that condemns homosexuality also prohibits adultery (Lev. 18:20), child sacrifice (v. 21), and sex with animals (v. 23). Are those who are making the argument that since it’s now permissible to eat certain once-prohibited foods that these are now acceptable alternative lifestyle choices? If we take a man-centered approach to these laws, we might say that the purpose of this legislation is only to ensure human prosperity. Such an approach to the law of God misses the most basic point. These laws show us God's own genuine personal care for His world, and as such these laws cannot be altered by human whim. To be sure, the Bible is man-oriented, and thus obedience to these laws will improve human life; but the laws are God's, and cannot be changed by man.

Leviticus 20 repeats the prohibitions against child sacrifice (vv. 2–5), adultery (v. 10), homosexuality (v. 13), and bestiality (vv. 15–16). Using the equivalence argument, are we to conclude that these laws no longer apply today because they are found in the “Holiness Code”?

Then there’s this verse sandwiched between Leviticus 18 and 20:

“You shall not take vengeance, nor bear any grudge against the sons of your people, but you shall love your neighbor as yourself; I am the Lord” (Lev. 19:18)

This verse is quoted frequently in the New Testament (Matt. 19:19; Mark 12:31; Luke 10:27; John 13:34; Rom. 13:9; Gal. 5:14; James 2:8). In fact, it’s a verse often quoted by homosexuals in defense of same-sex sexuality and same-sex marriage. Loving one’s neighbor does not preclude upholding the standard of God’s law otherwise, why would there be additional laws in Leviticus 19 that apply to all of us, including our neighbors?

When all the Bible is considered, we find that homosexuality is condemned based on the (1) creational foundation and definition of marriage as being between a male and a female, a man and a woman (Gen. 1-2), (2) the New Covenant’s affirmation of the creation establishment model (Matt. 19:1-7), and the New Testament’s condemnation of homosexuality as a moral wrong as stated in the law (1 Tim. 1:8-11), an act against nature (Rom. 1:26-27), and a practice that required repentance and a lifestyle change (1 Cor. 6:9-11) as did adultery (John 7:53-8:11).