Click here to listen to the podcast based on this article.

If you believe Christmas is a pagan holiday or that Christmas doesn’t have anything to do with Jesus Christ or Jesus wasn’t born on December 25th or you have any other aversion to Christmas, you don’t need to read any further.

Many people get bent out of shape when they see ‘Xmas’ or ‘X-Mas.’ They think it’s a way of removing Jesus Christ from Christmas. “Every year you see the signs and the bumper stickers saying, ‘Put Christ back into Christmas’ as a response to this substitution of the letter X for the name of Christ.” Nothing could be further from the truth.

Part of the problem is that most people have little historical background information related to the subject and general ignorance of classical languages like Greek and Latin. “Christ” is a Greek word for the Hebrew word “anointed one” or “Messiah,” as in Handel’s “Messiah.”

The Greek word for Christ is Χριστος. The Greek alphabet does not have the letters “c” or “h.” You will find a “k” (kappa) and an “h” sound that looks like a single opening quotation mark that looks like this: ’. It’s called a “rough breathing mark,” and it only appears at the beginning of some words like Ἰησοῦς.

Notice that the Greek word Χριστος begins with what looks like an X, the 24th letter of the English alphabet, but it’s really the Greek letter chi = Χ.

The starting point is the God of the Bible. The Bible begins with this foundational presupposition: “In the beginning God created the heavens and the earth” (Gen. 1:1). Against All Opposition lays out the definitive apologetic model to help believers understand the biblical method of defending the Christian faith

The late R.C. Sproul (1939–2017) wrote that “the idea of X as an abbreviation for the name of Christ came into use in our culture with no intent to show any disrespect for Jesus.” Using a single letter to represent a title or name is not unusual. For example, the “R. C.” in R. C. Sproul stands for Robert Charles.

Most Christians are familiar with the use of the symbol of the fish to represent Jesus Christ. The Greek word for fish in Greek is ιχθύς (lower case letters) and ΊΧΘΥΣ (upper case letters). Each letter represents a Greek word that in abbreviated form describes the redemptive and relational work of Jesus: Ίησοῦς Χριστός Θεοῦ Υἱός Σωτήρ: (’Iēsous Christos Theou Yios Sōtēr) = “Jesus Christ, God, Son, Savior.”

“The early Christians would take the first letter of each of those words and put those letters together to spell the Greek word for fish. That’s how the symbol of the fish became the universal symbol of Christendom,” Sproul writes.

Consider the use of X and P (the r sound in Greek) = Chi Rho. The Χ (Chi), as we’ve seen, is an abbreviation for Christ representing the first letter in the word Χριστός, and the letter “P” (Rho) represents the second letter in upper case form. What looks like a “P” to us is actually the Greek letter for “R.” 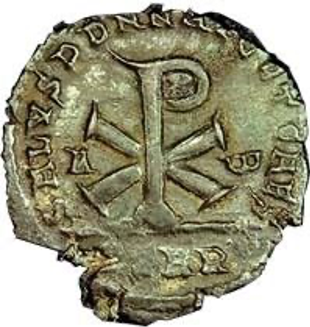 The Chi-Rho is common in Christian art and worship. In many of the examples you will also find the use of A and W, the first and last letters of the Greek alphabet, Alpha and Omega ( Rev. 1:8; 21:6; 22:13; Isa. 41:4), also descriptive of Jesus, and found to the left and right of the XP below: 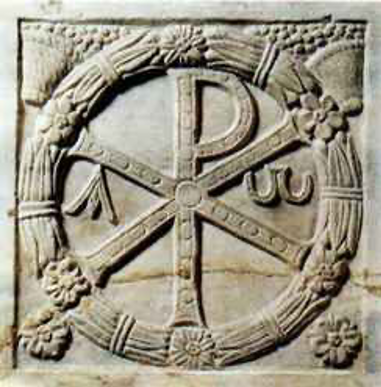 The following is from “A Word in Edgewise” by David Capes:

Earliest versions of writing Christmas as “Xmas” in English go back to the Anglo-Saxon Chronicle (about 1100). This predates the rise of secularism by over 600 years. The Oxford English Dictionary cites the use of “X”- for “Christ” as early as 1485. In one manuscript (1551) Christmas is written as “X’temmas.” English writers from Lord Byron (1811) to Samuel Coleridge (1801) to Lewis Carroll (1864) used the spelling we are familiar with today, Xmas.’

The origin of “Xmas” does not lie with secularists who are trying to take Christ out of Christmas, but in ancient scribal practices adopted to safeguard the divine name and signal respect for it…. No doubt some people today use the abbreviated form to disregard the Christian focus of the holy-day, but the background tells a different story, a story of faithful men and women showing the deep respect they have for Jesus at this time of year.”

The following is from Mental Floss:

Lots of people think that the X in Xmas is a secular watering down of the word Christ. You know, a “we love to celebrate the holiday but don’t believe in Jesus” sort of thing. However, that’s not the origin of the X.

The X comes from the Greek letter Chi, which is the first letter of Χρήστος. And if that’s all Greek to you, Χρήστος, of course, means Christ.

According to Etymology Online, the abbreviation dates back to 1551, when it appeared as X’temmas. Around 1100, the Anglo-Saxon Chronicle used Xres mæsse, where Xp- or Xr- corresponded to “Chr.”

According to Wikipedia, the first recorded use of Xmas by an American was in 1923, in a letter written by Oliver Wendel Holmes. Below is a 1922 advertisement from Ladies' Home Journal: “Give her a L’Aiglon for Xmas”:

So don’t be alarmed and disgruntled when you see Xmas. If the topic comes up in a discussion, do a little “Did you know. . .?”

Apologetics 101 is an in-depth study of defending the Christian faith. The Greek word apologia simply means "defense," and apologetics is the art and act of giving a defense. Christian Apologetics then is the art and act of defending the Christian faith, not a general proof of God in general. The Christian apologist must be ready to answer truth claims about the Bible, not claims about Hinduism, Islam, or any other false religion. The Bible makes the bold claim that Jesus is the ONLY way, and the Christian apologist must set his sights on the Bible alone, not on a defense of arbitrary theism.