I try to be patient with people who have legitimate questions about the fulfillment of Bible prophecy as they relate to the Olivet Discourse, but I get irritated with people who claim they’ve found the magic exegetical bullet (to change the metaphor) to counter a preterist (fulfilled) interpretation. What follows is an example of someone trying to use a flawed prophetic shoehorn to make his size 11 futurist foot fit into a size 9 preterist shoe. See my article “Prophetic Shoehorning.”

The following is an exchange I had with a prophetic shoehorner on whether Matthew 24 and Luke 21 are parallel accounts describing the same generation in the Synoptic Gospels. Some prophecy writers argue that Luke’s version describes events surrounding the destruction of Jerusalem in AD 70 while Matthew’s version is mostly about a future recapitulation of events that took place in AD 70.

Ryan Jones: Matthew 24 and Luke 21 are not parallel [accounts], but rather complementary. The two accounts for “fleeing Jerusalem” are completely different, not parallel. More importantly, one account is before the wars, rumors of wars, famines, pestilences, and earthquakes, while the other account is after these things. Most preterists don’t even realize there is a difference here, much less provide a substantive explanation.

Ryan Jones: Differences have to be reconciled, not ignored. Birth narratives are easily harmonized. I have never seen a preterist harmonize the differences in the “fleeing Jerusalem” accounts, especially the difference of one being before the wars, rumors of wars, pestilences, famines and earthquakes, and the other fleeing coming after these things. If I recall correctly, we had a brief exchange on this very topic, you said you would take a look, and I don’t think you ever commented again. So if you have an explanation on this, I’m all ears.

This means everything in between what Jesus said about the destruction of the temple and “this generation” passing away took place before their generation passed away. The parallels are unmistakable. The same is true when it comes to what follows. Grasp what this book teaches, and you won't waste any more of your time on the pre-mil, pre-trib fiction put out by the so-called ‘prophecy experts.’ Matthew 24 Fulfilled examines the issues related to popular ‘end-times’ hysteria and counters with a view consistent with all of Scripture.

Yes, there are differences. Some have argued that Luke’s version was given at a different time, but it’s not necessary to take this position to see that Luke is dealing with the same subject and adding material not found in Matthew and Mark. His additions add to the narrative like the way Luke’s birth narrative adds to what we find in Matthew but none of which is found in Mark’s gospel. There are many who would disagree with Ryan Jones’ statement that the “birth narratives are easily harmonized.” Check out any book on the harmony of the gospels, and you will find very few parallels. For example, see pages 27-31 in A Harmony of the Gospels by Robert L. Thomas and Stanley N. Gundry (Moody, 1978). They can be harmonized but not as easily compared to what we find with Jesus’ prediction about the destruction of the temple before the generation of His day passed away where there are often word-for-word parallels.

There is no strict chronology with Matthew 24:4-14. “Hearing about wars and rumors of wars” means just what it says. It’s not a direct reference to the Wars of the Jews that was written by Josephus when Rome invaded Jerusalem around AD 66. Darrell L. Bock writes, “Matthew 24:6 appears to suggest that these calamities are in the near future by noting that the disciples ‘are about’ μελλήσετε (mellēsete) to hear of wars and rumors of wars.”[1]

There were likely different responses to Jesus’ prophecy. The disciples took it seriously, but they only knew that His coming in judgment would take place before their generation passed away. They were not told who the agent of destruction would be. There were some hints (Luke 19:41-44) and Luke’s statement of “when YOU see Jerusalem surrounded by armies, then recognize [lit., know] that her desolation is at hand” (21:20). Jerusalem was surrounded by the Roman armies. There’s a good chance that many fled the city long before this event because of what Jesus had said would happen. It may be one of the reasons some early Christians sold some of their property (Acts 2:43-47).

A sample Preterist synthesis of prophecy and history informs us that Vespasian’s Roman army under his son Titus surrounded a Jerusalem besieged by civil war, and a holy temple occupied by: a generation of villains so mad, that had the Romans made a longer delay the city would have been swallowed up by the earth, or destroyed as Sodom… (Is 1:10 Jerusalem Wars 5:13:566) a national event described by this eyewitness as the greatest [national] misery since its’ foundation, (Mtt 24:21 Jerusalem Wars 6:8:408) in which the number of those which perished [over 1,100,000] exceeded all the destructions ..ever brought on the world (Jerusalem Wars 6:9:429), a time when false prophets abounded, (Mtt 24:24 Jerusalem Wars 6:5:285) “the daily sacrifice” failed (Dan 9:27 Jerusalem Wars 6:2:94) when famine and pestilence affected the estimated 3,000,000 people in the city, (Rev 18:8 Jerusalem Wars 5:12) a famine so bad people searched the sewers for dung, (Rev 18:8 Jerusalem Wars 5:13:571) and one mother ate her own child for food (Wars 6:3:207) when a measure of wheat was sold for a talent of money (Rev 6:6 Jerusalem Wars 5:13:571) when men sought by death [by sword over death by starvation], but found it not, (Rev 9:6 Jerusalem Wars 5:12:517) a context when fire and blood mingled together, the blood in the lanes in such quantities that the whole city ran with blood, to such a degree indeed that the fire of many of the houses was quenched with these men’s blood (Rev 8:7 Jerusalem Wars 6:8:406ff) earthquakes (Rev 6:12 Jerusalem Wars 1:19:370 ) and signs in the heavens: (Rev 8:12 Jerusalem Antiquities 17:6:167 Eclipse, comet) a time when the sounds of trumpets (Rev 8:13 Jerusalem Wars 6:1:68) and the noise of horses (Rev 9:16 Jerusalem Wars 3:2:33) were sounds to inspire dread and torment, (Rev 9:16 Jerusalem Wars 5:1:35) when the great plain in front of Jerusalem (Wars 5:2:67, 5:3:106ff) was leveled even wider by the four legions of the Roman army as numerous as locusts (Rev 9:3,7 Jerusalem Wars 4:9:536) to make a greater plain for battle. In 70 AD the entire city was shut up, the entire population of the nation captured, Josephus tells us_, in a kind of net._ (Matt 13:47 Jerusalem Wars 6:1:160). Our historian also tells us the time from the coming of the Roman Emperor Vespasian (in 66 AD) until the time _the daily sacrifices failed to be offered in the temple_ was three and a half years, or forty two months, or times, times and half a time. (Rev 12:14, 13:5, Dan 9:27 Jerusalem Wars 6:2:94). This is complimentary correspondence between prophetic fate and actual fulfillment that doesn’t need an hypothesis of 2000 years. (Source)

Skeptics remained, however. The Olivet Discourse mentions that the stones of the temple would be completely torn down, and yet the temple was still standing more glorious than ever when it had been rebuilt and rededicated in AD 64. As a result, there were “mockers” who asked, “Where is the promise of His coming?” (2 Pet. 3:3-4). In their minds, there was no need to flee. The standing temple was evidence that, in their view, Jesus was a false prophet.

We learn from Jesus that Peter would be handed over to tribulation (John 21:18-23). Peter was present when Jesus addressed the coming destruction of the temple before that generation passed away (Mk. 13:3).

Considering what I’ve discussed above, it’s patently false to claim, “the two accounts for ‘fleeing Jerusalem’ are completely different, not parallel.” Matthew and Luke describe the local conditions of the time and those who most likely fled early because they saw the handwriting on the wall because they believed Jesus and knew what was coming: 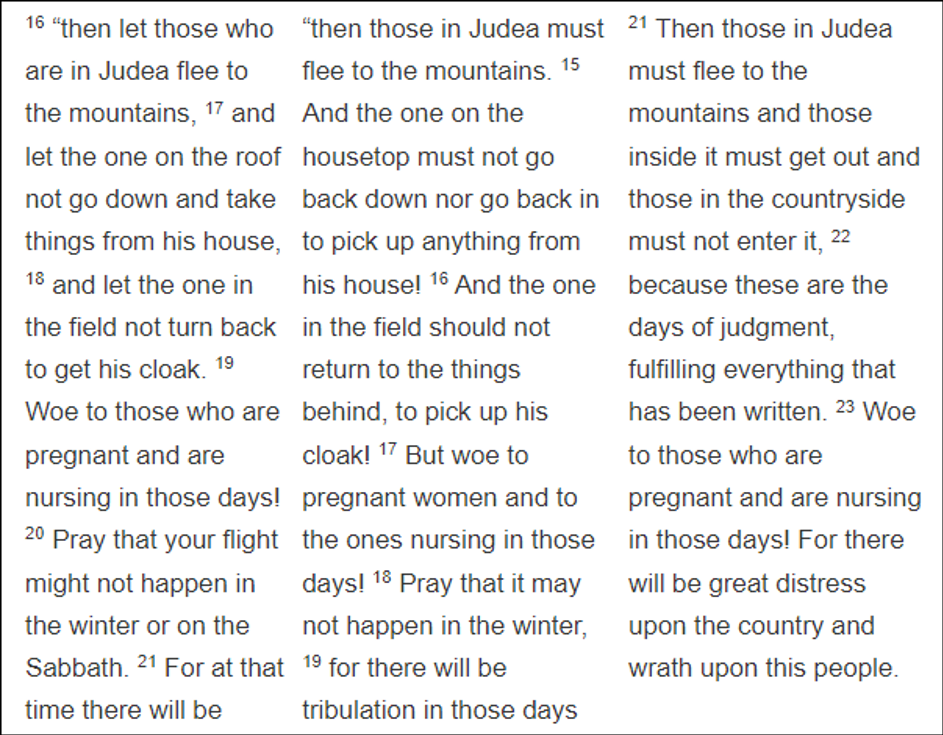 I suggest anyone who argues that there are irreconcilable differences between Matthew 24 and Luke 21 should read some of the numerous harmonies of the gospels. One based on the New American Standard Bible compiled by Robert L. Thomas and Stanley N. Gundry was published by Moody Press in 1978. Thomas was a dispensationalist, and there is no indication in any of the notes that he found “the two accounts for ‘fleeing Jerusalem’ are completely different, not parallel.” There’s also A. T. Robertson’s A Harmony of the Gospels. There are many more online that go back centuries. There are even harmonies based on the Greek.