Using the right word to get an unfamiliar and sometimes unpopular and counter-culture idea across to people is tactical. If someone wants to hide what is really going on, words that can mean almost anything are often used to serve as an ideological cover for repressive programs and ideologies. The word “gay” and the use of a rainbow flag offer cover for what the practice of homosexuality is all about. We almost never hear anyone describe homosexuality in terms of same-sex behavior. As a result, teaching homosexuality has become normative for very young children, so much so that such teaching has made its way into kindergarten and elementary curricula.

The starting point is the God of the Bible. The Bible begins with this foundational presupposition: ’In the beginning God created the heavens and the earth’ (Gen. 1:1). Against All Opposition lays out the definitive apologetic model to help believers understand the biblical method of defending the Christian faith.

Here we are in June told we must celebrate Pride Month. Everywhere we turn we are being propagandized by the normalization of sex acts, redefinitions, or no definition, of what a “woman” (or “womxn” as Michelle Obama writes it) is, and the claim that men have vaginas and can get pregnant. The military has gone insane by promoting sex acts as if they are equal to a person’s skin color that people are actually born with. Skin color is not a behavior. There was a time that the military discriminated on the basis of skin color. Equating 2SLGBTQQIA+ people that include two-spirit, questioning, and asexual, as Canadian Prime Minister Justin Trudeau has done, with the color of a person’s skin is a moral travesty. “Throughout June, the USMC [U.S. Marine Corps] takes #Pride in recognizing and honoring the contributions of our LGBTQ service members,” the U.S. Marine Corps said in a statement posted to social media. Attached was the following image: 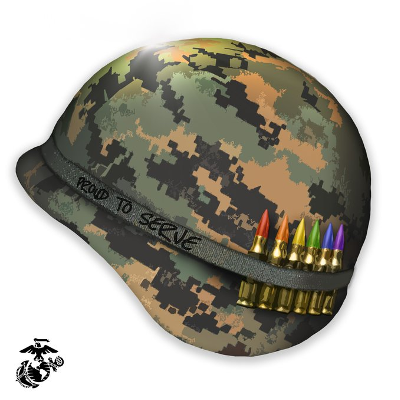 The wokest of them all is Pres. Biden:

“This month, we honor the resilience of LGBTQI+ people, who are fighting to live authentically and freely,” Joe Biden said in a May 31 proclamation on “Lesbian, Gay, Bisexual, Transgender, Queer, And Intersex Pride Month.”

Abortion, the killing of unborn babies, is described as “pro-choice.” Does anyone ever ask what’s being chosen? What is a pregnant woman who is “pro-choice” choosing to do? How many people could define socialism? Maybe it means being “social.” Who could be against that?

Similarly, words used by journalists often expose ideological bias for one worldview over another. “Right-wing conservatives” versus “Progressives” rather than Left-wing liberals. Who can be against being “progressive”? Is the alternative to be “regressive”? Frank Schaeffer, the son of the late Christian apologist, Francis A. Schaeffer, described journalistic bias this way in his book The Myth of Neutrality before he got “woke”:

Think of the use of labels to categorize political activity. Some labels are used to neutralize the actions of certain groups; others denote being “one of us,” acceptable.

The words “right-wing,” “fundamentalist,” “pro-life,” “absolutist,” and “deeply religious,” are put-downs more than categories. Conversely, think of the unspoken pat on the back and blessing that the following words convey: “moderate,” “pluralistic,” “liberal,” “civil libertarian,” “pragmatic,” and “enlightened.”[1]

Robert Bazell, the former chief science and health correspondent for NBC News, said, “Objectivity is a fallacy… There are different opinions, but you don’t have to give them equal weight.” American journalist Linda Ellerbee wrote that “There is no such thing as objectivity. Any reporter who tells you he’s objective is lying to you.”[2] I agree. There is no neutrality. Few people are objective in the sense of describing both sides of an issue accurately without editorial commentary. The best/worst slant is put on stories depending on what operating assumptions are being used to defend or criticize a position.

A similar metamorphosis has taken place with the word “woke.” It’s become a catchall word for a basket of social movements designed to remake the way people think and act. Most people don’t have time to read, study, and assess the bombardment of ideas they are hit with multiple times throughout the day via news outlets and social media platforms. Asked what it means to be “woke,” most people could not do it.

To be “woke” is to be awakened to long-suppressed social, moral, economic, and political inequities. To be “woke” means “I was sleeping, but I’ve been awakened.” On the surface, being awakened about long-held and practiced injustice is not a bad thing. As Christians, we know what it means to be awakened from the effect of sin and its relation to injustice. Once we were blind, but now we see (John 9:41). We were dead in trespasses and sins, but we have been made alive (Eph. 2:1).

· For anything that becomes visible is light. Therefore it says, “Awake, O sleeper, and arise from the dead, and Christ will shine on you” (Eph. 5:14).

· Besides this you know the time, that the hour has come for you to wake from sleep. For salvation is nearer to us now than when we first believed (Rom. 13:11).

In biblical terms, to be awakened is to see the world as it is and how it can be transformed as people are changed — made alive in Christ — and apply their “new creation” to every area of life (2 Cor. 5:17). So much that is good about a movement (seeking justice) has been borrowed from the Christian worldview and redefined with a foreign ideology that cannot sustain the desired objective. Force becomes the operating principle of change.

The Civil Rights Movement was led by ministers. The rhetoric of civil rights came from the language of Scripture. Consider the following from the Rev. Martin Luther King, Jr. who wrote this in March of 1965:

“Let Justice roll down like waters in a mighty stream,” said the Prophet Amos [5:24]. He was seeking not consensus but the cleansing action of revolutionary change. America has made progress toward freedom, but measured against the goal the road ahead is still long and hard. This could be the worst possible moment for slowing down.

These ministers awakened a nation based on ultimate principles of justice. Being “woke” today has no definitive moral foundation. Awakened to what by what? This is the key question. Yes, Black lives do matter. But how can any life matter when it is based on a materialistic worldview? For example, the moral and legal basis for abolishing slavery originated in the Christian West. England was the first to abolish the slave trade under the intense pressure of the Christian writings and arguments of William Wilberforce (1759–1833).

But since Charles Darwin’s On the Origin of Species (1859), the universe has been swept clean of a God who grants life, liberty, and the pursuit of happiness. These terms have been redefined to mean “every man does what is right in his own mind” (Judges 17:6). The New York Times published an op-ed on Good Friday of this year titled “In This Time of War, I Propose We Give Up God.” It was tried in the 20th century that led to the deaths of more than 100 million people.

The Church of Jesus Christ needs to enter the ideological conflict with a message of hope and righteousness. The “ancient boundary markers” of moral absolutes have been moved (Prv. 22:28). There are no longer any fixed standards of righteousness in the woke world except as defined by the new arbiters of what constitutes truth. Christians have contributed to the rise of “wokeness” by arguing that God’s Law is a pre-grace standard that does not have a role to play in the world at large. When God’s moral standards are ignored or deemed to be inapplicable in the secular realm — this age — there are always people who are willing and able to enforce a manufactured new standard. The rise of “wokeness” has been self-inflicted. Theodore Roszak used an apt phrase to describe much of modern-day Christendom: “Socially irrelevant, even if privately engaging.”[3]

It’s long past time to re-engage with the world with a message of hope, justice, and righteousness based on God’s Word. There won’t be a true Awakening any other way.