Each October, Christopher Columbus is hammered for his voyages of exploitation of native peoples. For example, Seattle, Washington, has designated the formerly Columbus Day as “Indigenous Peoples’ Day” as if Indigenous People were free from conquest, slavery, and brutality.

What many people do not know is that Columbus Day was designed to “combat racism against Italian immigrants, who endured everything from racial epithets to lynch mobs when they first arrived to the United States. The recognition of the holiday [not yet a Federal holiday] in 1892 by President Benjamin Harrison “was made in the wake of one of the worst episodes of racial violence in American history — the mass lynching of Italian Americans in New Orleans in 1891 that claimed the lives of eleven Italian immigrants.” Consider the following:

The violence in New Orleans was years in the making. Hatred against the Italian newcomers was openly espoused by the newspapers of the day. For example, in 1882 the New York Times ran an editorial with the headline, “Our Future Citizens,” in which the Times’ editorial board stated, “There has never been since New York was founded so low and ignorant a class among the immigrants who poured in here as the Southern Italians who have been crowding our docks during the past year.”

The Times editors went on to express their disgust that “utterly unfit — ragged, filthy, and verminous” Italian immigrant children would “be placed in the public primary schools among the decent children of American mechanics.”

In 1887, the same New York Times would write approvingly about the lynching in Mississippi of a man they referred to as “Dago Joe,” using the racial slur (“dago”) that was commonly directed at Italians. (Breitbart)

In 2019, New Orleans Mayor LaToya Cantrell officially apologized for the lynching of the 11 Italians in 1891. 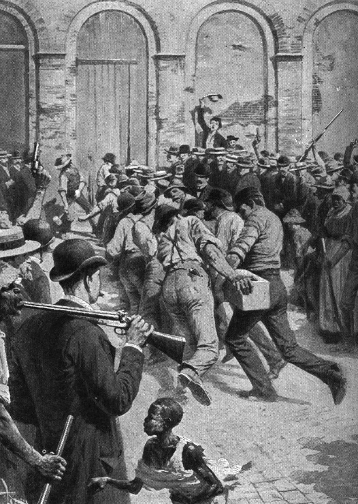 Ignorance of history is one of our nation’s biggest problems. We seem only to get history in bits and pieces in what Charles Baggage (1791-1871) described as “trimming” and “cooking.” The “woke” crowd is ignorant of the nature of many indigenous people groups and the reason Columbus Day was established and so are most Americans.

Thom Nickles describes his encounter with the forced absurdity of the anti-Columbus crowd:

A turquoise-colored sign on the door of my bank announcing closure on October 10 because of Indigenous Peoples’ Day inspired me to beat a path to a teller, even though I was not there for banking.

The question was far from fun but I didn’t want to appear strident. “Regarding the sign on the door…. What happened to the holiday called Columbus Day?” The teller rolled her eyes and said the wording on the sign was not the bank’s fault. She explained that the bank had made up a different sign that mentioned Columbus Day but the City of Philadelphia had forced them to scratch out Columbus and insert Indigenous Peoples Day (IPD).

“We didn’t do it,” she assured me. (Frontpage Magazine)

Columbus statues have been removed and defaced around the country. The anti-Columbus tirade has been fueled by Howard Zinn’s A People’s History of the United States which makes no mention of how the holiday got started_,_ a historical work that has been criticized by some left-wing historians. For a refutation of Zinn’s book, see Mary Grabar’s Debunking Howard Zinn_: Exposing the Fake History That Turned a Generation against America._ No one in history has been perfect in their exploits. There is room for criticism and evaluation of all events by sinful men and women.

The intrepid explorer is despised by Leftists and used by them to slam people who they claim once believed the earth was flat based on their religious beliefs. We saw John Kerry, Charles Osgood, and others bring out the old canard that if a person rejects certain scientific theories based on science (e.g., global warming) that they are like people who believed the earth was flat.

Climate hypocrite John Kerry said the following in a speech he gave at a graduation ceremony at Boston College:

If the US does not act and if it turns out that the critics and naysayers and the members of the Flat Earth Society — if it turns out they’re wrong, then we are risking nothing less than the future of the entire planet.

The best book on the subject of the flat earth myth is Jeffrey Russell’s Inventing the Flat Earth: Columbus and Modern Historians. The claim that Columbus had to convince the scientists and cartographers of his day that the earth was round is pure fiction, manufactured by Washington Irving in his 1828 two-volume biography of Columbus. Samuel Eliot Morison, a noted Columbus biographer who received a Pulitzer Prize for his 1941 Admiral of the Ocean Sea, describes the story by Irving as “misleading and mischievous nonsense, … one of the most popular Columbian myths.”

The dispute with Columbus in the 15th century was over how big the earth was not whether the earth was round or flat. Columbus was wrong; the map makers were right. The circumference of the earth was bigger than Columbus believed.

For decades, the flat earth slam was standard historical mythology that was written into our nation’s textbooks and is pulled out as an ideological hammer every time some liberal lie is questioned.

One critic of Russell’s book claims that evidence for the belief in a flat earth can be found in the Hereford Cathedral, located at Hereford in England, and the 13th century Hereford Mappa Mundi (Map of the World). 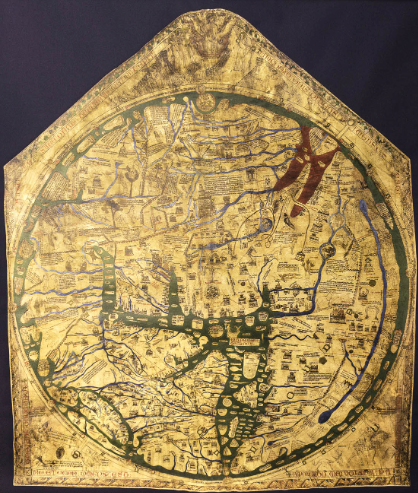 This would be similar to an archeological dig a thousand years from today finding a cache of vinyl maps that hung in public schools in the 1960s and concluding that people in the 20th century believed in a flat earth. Are our GPS screens globes or are they flat with four corners?

In the eleven-volume Our Wonder World, first published in 1914, the editors offered the following undocumented claims: “All the ancient peoples thought the earth was flat, or, if not perfectly flat, a great slightly curving surface,” and “Columbus was trying to convince people that the earth was round.”

Even the Encyclopedia Britannica perpetuated the myth of a round-earth solution for Columbus’s voyages as late as 1961: “Before Columbus proved the world was round, people thought the horizon marked its edge. Today we know better.” The people knew better in Columbus’s day.

A 1983 textbook for fifth-graders reported that Columbus “felt he would eventually reach the Indies in the East. Many Europeans still believed that the world was flat. Columbus, they thought, would fall off the earth.” A 1982 text for eighth-graders said that Europeans “believed … that a ship could sail out to sea just so far before it fell off the edge of the sea…. The people of Europe a thousand years ago knew little about the world.”

Prominent scholars like John D. Bernal (1901-1971), in his four-volume Science in History (1954), and Daniel J. Boorstin (1914-2004), prize-winning author and Librarian of Congress from 1975 to 1987, propagated the myth without any historical substantiation. Boorstin spills a great deal of ink inventing a history of flat-earth beliefs that he traces to an obscure sixth-century monk, Cosmas Indicopleustes, who, according to medieval scholar Jeffrey Russell, “had no followers whatever: his works were ignored or dismissed with derision throughout the Middle Ages.”

Earlier attempts to present Columbus as a scientific iconoclast can be found in two standard nineteenth-century anti-Christian works pitting science against religion. John William Draper claims that Christians had no concern for scientific discovery. Instead, “they originated in commercial rivalries, and the question of the shape of the earth was finally settled by three sailors, Columbus, De Gama, and, above all, by Ferdinand Magellan.” While Columbus and other informed sailors who regularly sailed beyond the horizon believed in “the globular figure of the earth,” such an idea was, “as might be expected … received with disfavor by theologians.”

Boorstin asserts that from AD 300 to at least 1300, Europe suffered under what he describes as “scholarly amnesia” due to the rise of “Christian faith and dogma [that] suppressed the useful image of the world that had been so slowly, so painfully, and so scrupulously drawn by ancient geographers.”

Bede (673-735), a monk of Jarow and “the Father of English history,” maintained “that the earth is a globe that can be called a perfect sphere because the surface irregularities of mountains and valleys are so small in comparison to its vast size.” He specifies that the “earth is ‘round’ not in the sense of ‘circular’ but in the sense of a ball.”[1]

The Columbus flat earth myth is another example of historical revisionism, the attempt by secularists to cast Christians in a negative light. Liberal historians relish the fact that schoolchildren all over the country are being taught that Christians are ignorant, flat-earth kooks who will not listen to reason and science. When the facts of history are accurately surveyed, however, we discover true science never conflicts with the Bible. Scientific misinformation is never promoted through an accurate understanding of the Bible. Instead, the manipulation of truth always occurs outside the biblical worldview.