It’s not surprising that most Americans don’t know the definitions of various governmental systems. “A professor found that a vast majority of his university students were unable to tell the U.S. Constitution from the Russian constitution…. Many students respond confessing how they have never read the U.S. Constitution and how they appreciate the foresight of the founding fathers to implement minimum wage and paternity leave,”[1] of which the Constitution is silent. I wonder how many Christians wouldn’t know the difference.

Myths, Lies, and Half-Truths takes a closer look at God's Word and applies it to erroneous misinterpretations of the Bible that have resulted in a virtual shut-down of the church's full-orbed mission in the world (Acts 20:27). Due to these mistaken interpretations and applications of popular Bible texts to contemporary issues, the Christian faith is being thrown out and trampled under foot by men (Matt. 5:13). 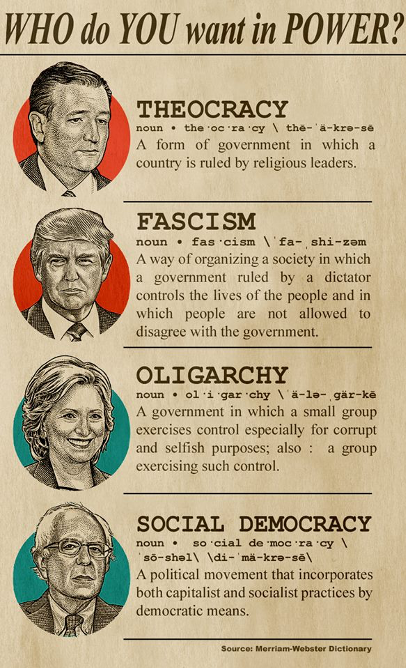 You can imagine how many college students and adults get the above definitions wrong while attributing their beliefs to the wrong people and groups. Let’s begin with “theocracy.” The word “theocracy” consists of two Greek words: theos (God) and kratos (power or rule). In its simplest definition, theocracy means the “rule of God.” The word is not found in the Bible, although the concept is present. Most do not know the definition of theocracy. Here’s an example:

Unfortunately, there are some Christian groups … who are espousing an unhealthy Christian nationalism that merges Christian identity with national identity and wraps the Gospel in the American flag. And the most extreme among them would even welcome a theocratic kingdom on earth where religious leaders dictate how the society is governed.

This is not the proper definition of theocracy, although it is a popular definition. The word was coined by Flavius Josephus, a first-century Jewish historian for the Romans whose Wars of the Jews nearly parallels Jesus’ prediction of the Destruction of Jerusalem that took place in AD 70 by the Romans (Matt. 24; Mark 13; Luke 21),[2] and appears in his writings only once in Against Apion (2.164–165): “placing all sovereignty and authority in the hands of God.”[3]

Gabriel Sivan, a Jewish writer who has contributed articles to the Encyclopedia Judaica, offers the following as a helpful clarification of the term:

To the modern ear the word ‘theocracy’ has distinctly pejorative overtones, suggesting the rule of some oppressive priestly caste, “government by state by immediate Divine guidance or by officials regarded as divinely guided,” to quote a standard definition. Yet, unlike certain other systems known in antiquity, “the ‘Theocracy’ of Moses was not a government of priests, as opposed to kings; it was a government by God Himself, as opposed to the government by priests or kings” (Dean Arthur Stanley, A History of the Jewish Church, 1862). The U.S. jurist and statesman Oscar Straus, a close associate of President Theodore Roosevelt, also stressed this point in his study of American culture’s indebtedness to the Hebraic concept: “The very fact that … with the single exception of Eli, no priest was ever elected to the magistracy during the entire period of the Commonwealth, decidedly [negates] any such interpretation” (The Origin of the Republican form of Government in the United States of America, 1887).[4]

A politician who appeals to the Bible as a guide to civil government is not advocating for a theocracy as the term is generally understood. I explain this in great detail in my books God and Government with Student Workbook, Restoring the Foundation of Civilization, and Liberty at Risk. God is the Sovereign Theocrat/Governor. He has instituted limited governments for our world: family, church, and civil governments. The church and civil spheres are jurisdictionally separate but bound to follow God’s law as they apply to each sphere.

Given today’s understanding of theocracy, any law that is based on God’s moral law is by definition a theocracy. But every law is based on someone’s view of morality. Rushdoony points out:

In the way the word theocracy is defined today, every political system is theocratic if either the individual (Libertinism, Moral Anarchy, King, Monarch) or the group (Democracy, Oligarchy) is the basis of what’s morally right or wrong. Atheistic regimes are theocratic since they place the source of law in the ruler (“every person doing what is right in his own eyes”), the group, or the civil sphere. Communism comes to mind.

The rejection of the true God leads inescapably to the choice of another god. If any person, group, court, etc. establishes himself/themselves as the final arbiter of right and wrong, then he/they have taken upon the attributes of a god. Thus, he/they are theocratic.

Democracy can become theocratic if absolute power is given to the voice of the people. You’ve heard the phrase: “Vox populi, vox dei.” Those who promote a particular worldview, and want to see it implemented socially, educationally, politically, and judicially, have elevated humans to the status of gods. Their intentions are theocratic. Only their choice of god has changed.

The word “Messianic” is used in a similar way. While it’s generally attributed to religious figures, it can apply, for example, to education (“The Messianic Character of American Education”) and politics (“The Messianic State”).

Theocracy is no different. Once there is no need for a transcendent God, there is no longer an operating system of fixed laws. Man becomes the new god collectivized in the State. To use Hegel’s phrase, “the State is god walking on earth.”

Conde Pallen’s utopian novel Crucible Island depicts what happens when the God of the Bible is rejected and the State becomes God. Man looks for a substitute provider so that “the individual should have no thought, desire, or object other than the public welfare, of which the State is the creator and the inviolable guardian. As soon as the child is capable of learning, he is taught the Socialist catechism, whose first questions run as follows”:

Q. By whom were you begotten?

A. By the sovereign State.

Q. Why were you begotten?

A. That I might know, love, and serve the Sovereign State always.

Q. What is the sovereign State?

A. The sovereign State is humanity in composite and perfect being.

Q. Why is the State supreme?

A. The State is supreme because it is my Creator and Conserver in which I am and move and have my being and without which I am nothing.

Q. What is the individual?

A. The individual is only a part of the whole, and made for the whole, and finds his complete and perfect expression in the sovereign State. Individuals are made for cooperation only, like feet, like hands, like eyelids, like the rows of the upper and lower teeth.[6]

Lech Walesa, the winner of the 1983 Nobel Peace Prize and president of Poland from 1990 to 1995, said the following about Ronald Reagan and his strong stand against Communism in word and deed: “He was someone who was convinced that the citizen is not for the state, but vice-versa, and that freedom is an innate right.”[7] But this only works when God is the sole Sovereign. All who deny Him are usurpers and claim deity for themselves as others have done:

· “The State incarnates the Divine Idea upon earth” (Hegel).

· “The State is the supreme power, ultimate and beyond repeal, absolutely independent” (Fichte).[8]

· “The State dominates the nation because it alone represents it” (Hitler).

· “The State embraces everything, and nothing has value outside the State. The State creates right” (Franklin Delano Roosevelt)

As O’Brien tells Winston Smith in George Orwell’s 1984, “Power is not a means; it is an end.” Later on, Smith shows that he finally understands when he painfully writes: “GOD IS POWER.” He came to realize that the State is God because it is omnipotent.[9]

[2]See “APPENDIX B: Josephus on the Fall of Jerusalem” in David Chilton’s Paradise Restored: A Biblical Theology of Dominion.

[3]“Some peoples have entrusted the supreme political power to monarchies, others to oligarchies, yet others to the masses. Our lawgiver [Moses], however … gave to his constitution the form of what—if a forced expression be permitted—may be termed a ‘theocracy,’ placing all sovereignty and authority in the hands of God.”