The original title of this article is “Concerning Halloween.” Since it was first published in 1996, it has made its way around the world and stirred up a lot of discussions. That’s a good thing.

As you can imagine many Christians oppose Halloween for obvious reasons. It’s lost its original meaning. You can hear it in the way it’s often pronounced: “Holloween” rather than Halloween. There’s a big difference, as James Jordan points out in his informative article.

If Christian parents are going to allow their children to participate in All Hallows’ Eve events, they should sit them down and explain the festival’s real meaning. It will change how young people understand the victory of Jesus on the cross. The devil is not a competing god; he’s a vanquished foe.

Fear over Halloween reverses the gains of early Christianity, and its victory over the fear of those tiny little tyrant pagan gods. They fled from the sign of the cross. Now we cower or worse attack the liberty of those who do not cower. So very, very, very tired of the whole Christian killjoy thing. The Bible is not a book of don’ts. It’s a book of do’s with a few don’ts mixed in because some kinds of behavior interfere with living a full life. Want to cower in fear? Your choice. Don’t goad us into it. Halloween is a Christian holiday, All Hallows eve, designed to mock the powers of darkness, and demonstrate that we don’t fear them. I plan to live in the true spirit of Halloween, which is not fear kids in masks or to fear people who fear kids in masks.

Too many Christians fail to understand the complete victory Jesus had over evil at the cross. Our world is a mess, not because of the devil, but because we don’t believe and act on what we say we believe. The devil is a defeated foe, a mere creature who flees when resisted (James 4:7). – Gary DeMar

The following article was written by James B. Jordan under the title “Concerning Halloween” (1996).

It has become routine in October for some Christian schools to send out letters warning parents about the evils of Halloween, and it has become equally routine for me to be asked questions about this matter.

“Halloween” [not Holloween] is simply a contraction for All Hallows’ Eve. The word “hallow” means “saint,” in that “hallow” is just an alternative form of the word “holy” (“hallowed be Thy name”). All Saints’ Day is November 1. It is the celebration of the victory of the saints in union with Christ. The observance of various celebrations of All Saints arose in the late 300s, and these were united and fixed on November 1 in the late 700s. The origin of All Saints Day and of All Saints Eve in Mediterranean Christianity had nothing to do with Celtic Druidism or the Church’s fight against Druidism (assuming there ever even was any such thing as Druidism, which is actually a myth concocted in the 19th century by neo-pagans.)

In the First Covenant, the war between God’s people and God’s enemies was fought on the human level against Egyptians, Assyrians, etc. With the coming of the New Covenant, however, we are told that our primary battle is against principalities and powers, against fallen angels who bind the hearts and minds of men in ignorance and fear. We are assured that through faith, prayer, and obedience, the saints will be victorious in our battle against these demonic forces. The Spirit assures us: “The God of peace will crush Satan under your feet shortly” (Romans 16:20).

The Festival of All Saints reminds us that though Jesus has finished His work, we have not finished ours. He has struck the decisive blow, but we have the privilege of working in the mopping up operation. Thus, century by century the Christian faith has rolled back the demonic realm of ignorance, fear, and superstition. Though things look bad in the Western world today, this work continues to make progress in Asia and Africa and Latin America.

The Biblical day begins in the preceding evening, and thus in the Church calendar, the eve of a day is the actual beginning of the festive day. Christmas Eve is most familiar to us, but there is also the Vigil of Holy Saturday that precedes Easter Morn. Similarly, All Saints’ Eve precedes All Saints’ Day.

The concept, as dramatized in Christian custom, is quite simple: On October 31, the demonic realm tries one last time to achieve victory, but is banished by the joy of the Kingdom.

What is the means by which the demonic realm is vanquished? In a word: mockery. Satan’s great sin (and our great sin) is pride. Thus, to drive Satan from us we ridicule him. This is why the custom arose of portraying Satan in a ridiculous red suit with horns and a tail. Nobody thinks the devil really looks like this; the Bible teaches that he is the fallen Arch-Cherub. Rather, the idea is to ridicule him because he has lost the battle with Jesus and he no longer has power over us.

(The tradition of mocking Satan and defeating him through joy and laughter plays a large role in Ray Bradbury’s classic novel, Something Wicked This Way Comes, which is a Halloween novel.)

The gargoyles that were placed on the churches of old had the same meaning. They symbolized the Church ridiculing the enemy. They stick out their tongues and make faces at those who would assault the Church. Gargoyles are not demonic; (("What is the purpose of Gargoyles? The first is a practical purpose - gargoyles provided a method of drainage that protected the stones and the mortar of churches, cathedrals, and castles from erosion. The number of Gargoyles added to buildings were numerous because dividing the flow of water minimized potential water damage.  The second purpose of gargoyles was as ‘guardians’ of the buildings in the form of abstract symbols designed to represent, and to ward off evil.")) they are believers ridiculing the defeated demonic army. 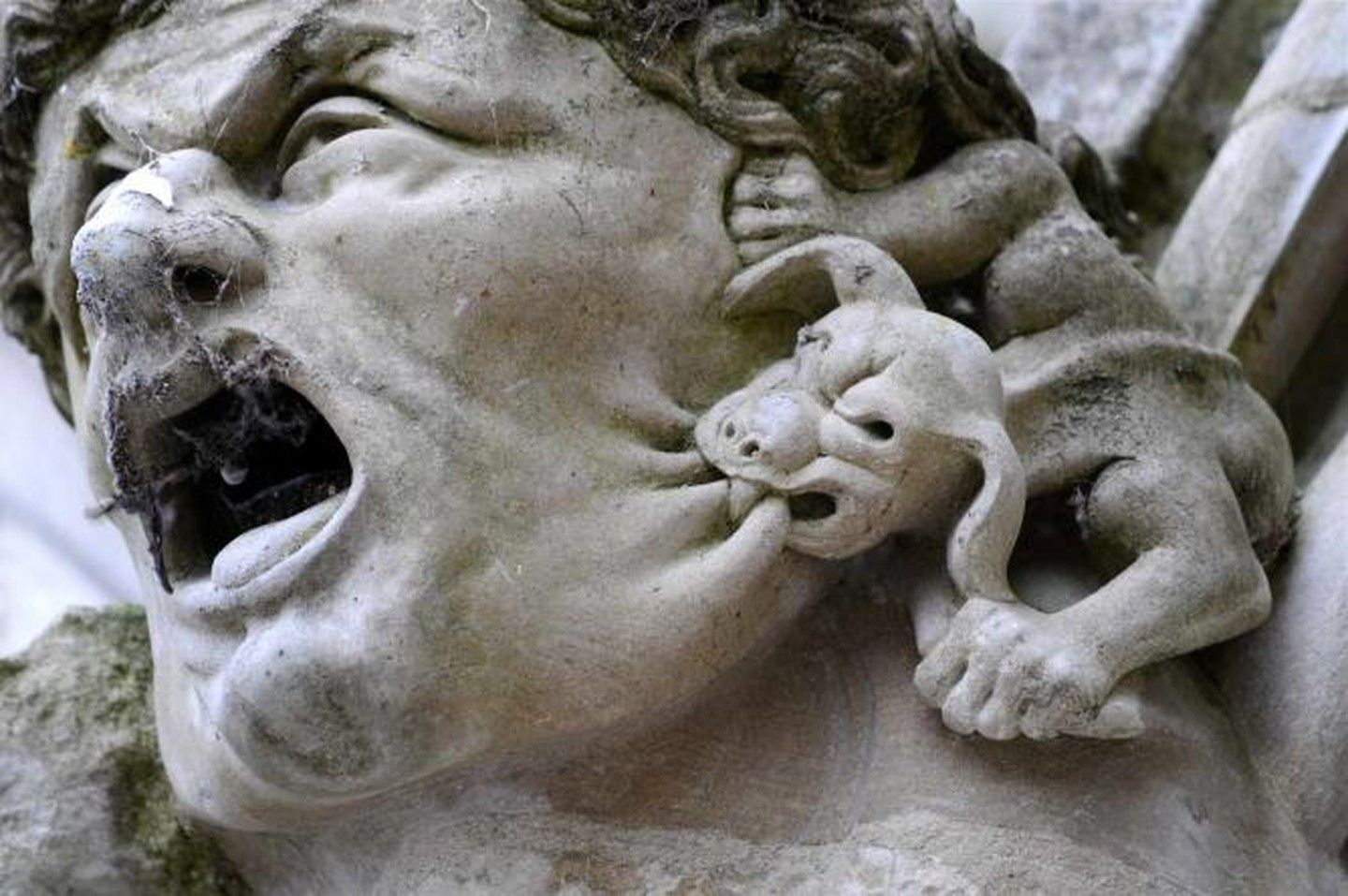 Thus, the defeat of evil and of demonic powers is associated with Halloween. For this reason, Martin Luther posted his 95 challenges to the wicked practices of the Church to the bulletin board on the door of the Wittenberg chapel on Halloween. He picked his day with care, and ever since Halloween has also been Reformation Day.

Similarly, on All Hallows’ Eve (Hallow-Even – Hallow-E’en – Halloween), the custom arose of mocking the demonic realm by dressing children in costumes. Because the power of Satan has been broken once and for all, our children can mock him by dressing up like ghosts, goblins, and witches. The fact that we can dress our children this way shows our supreme confidence in the utter defeat of Satan by Jesus Christ – we have NO FEAR!

I don’t have the resources to check the historical origins of all Halloween customs, and doubtless they have varied from time to time and from Christian land to Christian land. “Trick or treat” doubtless originated simply enough: something fun for kids to do. Like anything else, this custom can be perverted, and there have been times when “tricking” involved really mean actions by teenagers and was banned from some localities.

We can hardly object, however, to children collecting candy from friends and neighbors. This might not mean much to us today, because we are so prosperous that we have candy whenever we want, but in earlier generations people were not so well off, and obtaining some candy or other treats was something special. There is no reason to pour cold water on an innocent custom like this.

Similarly, the jack-o’-lantern’s origins are unknown. Hollowing out a gourd or some other vegetable, carving a face, and putting a lamp inside of it is something that no doubt has occurred quite independently to tens of thousands of ordinary people in hundreds of cultures worldwide over the centuries. Since people lit their homes with candles, decorating the candles and the candle-holders was a routine part of life designed to make the home pretty or interesting. Potatoes, turnips, beets, and any number of other items were used.

Wynn Parks writes of an incident he observed: “An English friend had managed to remove the skin of a tangerine in two intact halves. After carving eyes and nose in one hemisphere and a mouth in the other, he poured cooking oil over the pith sticking up in the lower half and lit the readymade wick. With its upper half on, the tangerine skin formed a miniature jack-o’-lantern. But my friend seemed puzzled that I should call it by that name. `What would I call it? Why a “tangerine head,” I suppose.’” (Parks, “The Head of the Dead,” The World & I, November 1994, p. 270.)

In the New World, people soon learned that pumpkins were admirably suited for this purpose. The jack-o’-lantern is nothing but a decoration; and the leftover pumpkin can be scraped again, roasted, and turned into pies and muffins.

In some cultures, what we call a jack-o’-lantern represented the face of a dead person, whose soul continued to have a presence in the fruit or vegetable used. But this has no particular relevance to Halloween customs. Did your mother tell you, while she carved the pumpkin, that this represented the head of a dead person and with his soul trapped inside? Of course not. Symbols and decorations, like words, mean different things in different cultures, in different languages, and in different periods of history. The only relevant question is what does it mean now, and nowadays it is only a decoration.

And even if some earlier generations did associate the jack-o’-lantern with a soul in a head, so what? They did not take it seriously. It was just part of the joking mockery of heathendom by Christian people.

This is a good place to note that many articles in books, magazines, and encyclopedias are written by secular humanists or even the pop-pagans of the so-called “New Age” movement. (An example is the article by Wynn Parks cited above.) These people actively suppress the Christian associations of historic customs, and try to magnify the pagan associations. They do this to try and make paganism acceptable and to downplay Christianity. Thus, Halloween, Christmas, Easter, etc., are said to have pagan origins. Not true.

Oddly, some fundamentalists have been influenced by these slanted views of history. These fundamentalists do not accept the humanist and pagan rewriting of Western history, American history, and science, but sometimes they do accept the humanist and pagan rewriting of the origins of Halloween and Christmas, the Christmas tree, etc. We can hope that in time these brethren will reexamine these matters as well. We ought not to let the pagans do our thinking for us.

Nowadays, children often dress up as superheroes, and the original Christian meaning of Halloween has been absorbed into popular culture. Also, with the present fad of “designer paganism” in the so-called New Age movement, some Christians are uneasy with dressing their children as spooks. So be it. But we should not forget that originally Halloween was a Christian custom, and there is no solid reason why Christians cannot enjoy it as such even today.

“He who sits in the heavens laughs; Yahweh ridicules them” says Psalm 2. Let us join in His holy laughter, and mock the enemies of Christ on October 31.