The Band of Brothers’ 10 Secrets of Leadership

Do you want to be a leader? How we need Christians to lead in our day! There is in the Church of America a deficit of genuine Christian leadership. Those who purport to make themselves leaders often imitate the power-climbing of the world in order to gain preeminence, and it has contributed much toward the Church losing its brightness and savor as the light and salt of the world. (See Matthew 5:13-16.)

“And there was also a strife among them [the disciples], which of them should be accounted the greatest. And he said unto them, The kings of the Gentiles exercise lordship over them; and they that exercise authority upon them are called benefactors. But ye shall not be so: but he that is greatest among you, let him be as the younger; and he that is chief, as he that doth serve. For whether is greater, he that sitteth at meat, or he that serveth? is not he that sitteth at meat? but I am among you as he that serveth.”

As Jesus says these words, He gets down on His hands and knees and He serves by washing the disciples’ feet. Then He says, “If I then, your Lord and Master, have washed your feet; ye also ought to wash one another’s feet” (John 13:14). His point was not that foot-washing become a new sacrament of the church, but that Christians would lead by serving each other just as He did. A Christian following Christ’s example does not demand prestige or respect, but leads by example in service to others.

[get_product id=”1449″ align=”right” size=”small”]Many good examples of Christian leadership may be found from the life of Major Richard Winters, who served as the field officer and later the battalion commander over Easy Company, a division of the 101st Airborne during World War II. Easy Company found itself behind enemy lines surrounded by Nazis on multiple occasions. They fought in the Battle of Normandy, the Battle of Carenteen, and Operation Market Garden. Moreover, they fought while enduring the harsh winter in the Battle of the Bulge. Easy Company later became immortalized in Stephen Ambrose’s book Band of Brothers (a title inspired by Henry V’s Non Nobis Domine speech), and the television mini-series that followed.

Before going to battle in Normandy, some of the men suspected Winters of being a Mennonite because he stayed sober and never cussed. But he proved himself to be an able field commander and tactician, and they soon came to admire him. Each man of Easy Company who survived the war praised Major Winters as a true leader. He instilled confidence. He led by example. 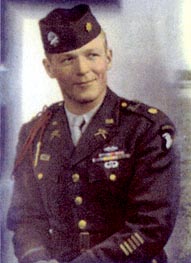 A few years ago I came across a book written by Major Winters, then an old and admired veteran. Within the pages of the book, Winters shares why he believes Easy Company persevered through so many of the toughest battles in World War II. He humbly honors the men who trained the team, even Lieutenant Herbert Sobel – a commander despised as a tyrant by most who served under him. Sobel ruled Easy Company with an iron fist throughout bootcamp, but Winters acknowledged that had it not been for Sobel’s harshness, Easy Company would probably not have developed the stamina that later pushed the team through the war. Winters honored Sobel even when he wrongly tried to have Winters court martialed.

Sobel proved himself to be a firm disciplinarian, but wilted in field operation drills. He was not a leader. In contrast, Winters rallied Easy Company together in the midst of unexpected attack, and calmly led the men to victory.

At the end of the book, Major Winters revealed his ten rules of leadership, which I have quoted below. May they serve as a call to Christian men to stand fast and quit ourselves like men unto leadership in the Army of Christ. (See I Corinthians 16:23.)

1. Strive to be a leader of character, competence, and courage.
2. Lead from the front. Say, “Follow me!” and then lead the way.
3. Stay in top physical shape—physical stamina is the root of mental toughness.
4. Develop your team. If you know your people, are fair in setting realistic goals and expectations, and lead by example, you will develop teamwork.
5. Delegate responsibility to your subordinates and let them do their jobs. You can’t do a good job if you don’t have a chance to use your imagination or your creativity.
6. Anticipate problems and prepare to overcome obstacles. Don’t wait until you get to the top of the ridge and then make up your mind.
7. Remain humble. Don’t worry about who receives the credit. Never let power or authority go to your head.
8. Take a moment of self-reflection. Look at yourself in the mirror every night and ask yourself if you did your best.
9. True satisfaction comes from getting the job done. The key to a successful leader is to earn respect — not because of rank or position, but because you are a leader of character.
10. Hang tough!—Never, ever, give up.