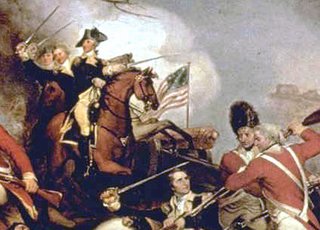 We remember 1776 as the year the Founding Fathers signed the Declaration of Independence. We remember the ideals embodied in that eloquent document. But few of us realize the sacrifice the soldiers of the colonial army endured to birth those eloquent ideals into reality. Few of us realize how close we came to losing again and again.

A few summers ago I enjoyed reading David McCullough’s bestseller 1776, a well-written, documented account of the first year in the War for Independence. That book tells the story of the struggles Washington’s army endured just to survive.

In that year Washington often had to fight to keep his army over one thousand members, while being hounded by a British army with tens of thousands of soldiers. They lacked sufficient weapons. They lacked proper training. They lacked basic supplies. Disease plagued the soldiers frequently. Washington himself was plagued by traitors and arrogant assisting generals who sought to displace him.

However, more than once in 1776 something happened that the continental army could only explain as “the hand of God” mercifully helping them.

The Battle for Boston

One example came during the battle at Boston on March 5th. The night was unseaonably clear and bright as the soldiers quickly dug trenches for the coming battle. When the sun rose the next day the British were so suprised by the progress the Americans had made that General Howe exclaimed, “[T]hese fellows have done more work in one night than I could make my army do in three months.”

A British egineering officer calculated that the progress the rebels had made must have required 15,000 to 20,000 men. General Howe, in his official account, would be more conservative and put the number at 14,000 — more than double the actual size of the colonial army at the time.

The British scrambled to retaliate against the entrenched American army, but just as the battle was beginning, it was suddenly interrupted. The weather had dramatically shifted from clear skies during the night to a storm by noon. As the day turned to evening the storm turned to hail and sleet and “the wind blew almost a hurricane.”

[get_product id=”1384″ align=”right” size=”small”]As a result of the storm, General Howe decided not to attack and eventually retreated from Boston. “Like others, [Washington] attributed the storm of March 5 to the intervening hand of God. He did not ‘lament or repine at any act of Providence,’ he told Joseph Reed”. [1]

At a later battle at New York harbor, a fleet of British ships attempted to attack the colonial army, but became paralyzed when the winds suddenly shifted against them. Before the Battle at Trenton, where Washington crossed the Delaware, the Hessian commander in charge of the fort had received a note warning him about Washington’s army launching a sneak attack. The Hessian commander uncharacteristically did not read the note until it was too late. To some these helpful events may seem only random coincidences or luck, but to the Christian, and to the founding fathers themselves, they are nothing less the fingerprint of God on their behalf.

What Won the War?

At the end of his book, David McCullough assessed the cause for the colonials victory in the face of such overwhelming odds:

Financial support from France and the Netherlands, and military support from the French army and navy, would play a large part in the outcome. But in the last analysis it was Washington and the army that won the war for American independence. The fate of the war and the revolution rested on the army. The Continental Army – not the Hudson River or the possession of New York or Philadelphia – was the key to victory. And it was Washington who held the army together and gave it “spirit” through the most desperate of times.

He was not a brilliant strategist or tactician, not a gifted orator, nor an intellectual. At several crucial moments he had shown marked indecisiveness. He had made serious mistakes in judgment. But experience had been his great teacher from boyhood, and in this his greatest test, he learned steadily from experience. Above all, Washington never forgot what was at stake and he never gave up.

Again and again, in letters to Congress and to his officers, and in his general orders, he had called for perseverance – for “perseverence and spirit,” for “patience and perseverance,” for “unremitting courage and perseverance.” . . . Without Washington’s leadership and unrelenting perseverance, the revolution almost certainly would have failed. As Nathanael Green foresaw as the war went on, “He will be the deliverer of his own country.” [2]

So historian McCullough says that without qualification General George Washington’s perseverance — not his brilliance as a commander — was the foremost reason the colonists succeeded against Great Britain. But how was Washington able to persevere as he did? Earlier in his book, David McCullough reveals this is as well, if we will only take the time to connect the dots. As McCullough points out, in a letter written to Joseph Reed, Washington foretold what he believed the basis for his perseverence would be:

“If I shall be able to rise superior to these, and many other difficulties which might be enumerated, I shall most religiously believe that the finger of Providence is in it, . . .” [3]

So David McCullough’s 1776 asserts that Washington’s perseverance was the single most significant reason that the colonist won the war, and Washington says that God’s blessing of providence was the sole reason that he persevered.

The theme of God’s controlling providence directing the affairs of men runs throughout the Scriptures. The Word of God says in Zechariah 4:6, “Not by might, nor by power, but by my spirit, saith the Lord of hosts.”  In Proverbs 16:9, “A man’s heart deviseth his way: but the LORD directeth his steps.”  In Proverbs 16:33, “The lot is cast into the lap; but the whole disposing thereof is of the Lord.” This is no deistic, absentee God that the Bible speaks of, nor is it a deistic, absentee God that Washington was writing about. It is the God, who as Ben Franklin said, “governs in the affairs of men!”

On this July 4th, while we give thanks for our founders for determining to uphold “the laws of nature and of nature’s God” over the law of a tyrant king and parliament, let us most of all give thanks to the God who blessed their determination and made it fruitful to birth the nation we so casually enjoy each day.