Each Columbus Day, Christopher Columbus is hammered for his voyages of exploitation of native peoples. At the same time, Christians are ridiculed for once opposing the forward-thinking Columbus and his rejection of the flat earth mythology that was said to have been held by the Medieval church. Is any of it true? I’ll leave the question of exploitation to be answered by others, but the flat earth issue is easily answered. In the eleven-volume Our Wonder World, first published in 1914, the editors offered the following undocumented claims: “All the ancient peoples thought the earth was flat, or, if not perfectly flat, a great slightly curving surface,” and “Columbus was trying to convince people that the earth was round.” ((Howard Benjamin Grose, ed., Our Wonder World, 11 vols. (Chicago: George L. Shuman & Co., [1914] 1918), 1:1, 5.))

Even as recently as 1961 the Encyclopedia Britannica perpetuated the myth that Columbus’ voyage was about proving the earth was round: “Before Columbus proved the world was round, people thought the horizon marked its edge. Today we know better.” The people knew better in Columbus’ day.

A 1983 textbook for fifth-graders reported that Columbus “felt he would eventually reach the Indies in the East. Many Europeans still believed that the world was flat. Columbus, they thought, would fall off the earth.” ((America Past and Present (Scott Foresman, 1983), 98. Quoted in Russell, Inventing the Flat Earth, 3.)) A 1982 text for eighth-graders said that Europeans “believed … that a ship could sail out to sea just so far before it fell off the edge of the sea…. The people of Europe a thousand years ago knew little about the world.” ((We the People (Heath, 1982), 28–29. Quoted in Russell, Inventing the Flat Earth, 3.))

Prominent scholars like John D. Bernal (1901–1971), in his four-volume Science in History (1954), and Daniel J. Boorstin (1914–2004), prize-winning author and Librarian of Congress from 1975 to 1987, propagated the myth without any historical substantiation. Boorstin spills a great deal of ink inventing a history of flat-earth beliefs that he traces to an obscure sixth-century monk, Cosmas Indicopleustes, who, according to medieval scholar Jeffrey Russell, “had no followers whatever: his works were ignored or dismissed with derision throughout the Middle Ages.” ((Jeffrey Burton Russell, Inventing the Flat Earth: Columbus and Modern Historians (New York: Praeger, 1991), 4. See Daniel J. Boorstin, The Discoverers: A History of Man’s Search to Know His World and Himself (New York: Random House, 1983), chaps. 11-14.))

The “shape of the earth” was not in question in Columbus’s day. “Columbus, like all educated people of his time, knew that the world was round…." ((Zvi Dor-Ner, Columbus and the Age of Discovery (New York: William Morrow, 1991), 72.))

The myth is widely held that scholars of the Renaissance believed that the Earth was flat and Columbus had to prove them wrong by sailing west to “India.” Makes a great story, except that it’s categorically false. Since the dawn of recorded history, people realized that the Earth was a sphere. Aristotle came to this conclusion through geometry; Roman scholars were also clear on this point. Documented accounts take note of how the mast of a ship stays visible after the body disappears over the horizon. Even ancient sailors had to be aware of the Earth’s curve. (JSTOR) 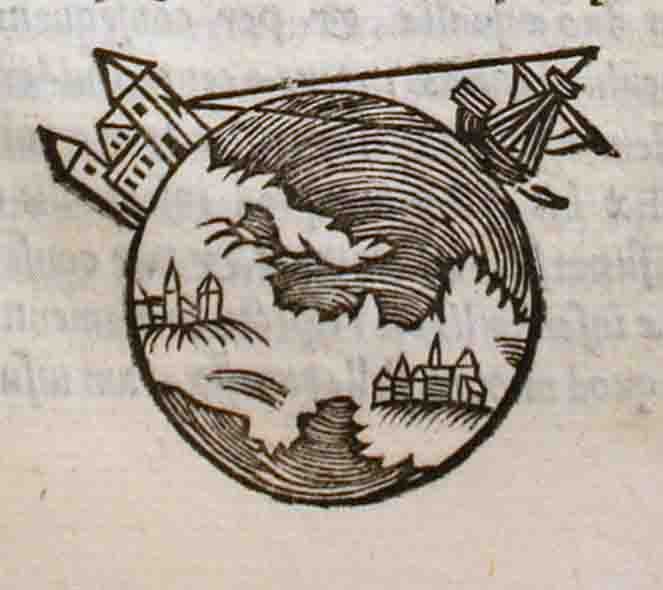 The above image is from a 1550 edition of a reproduction of the work On the Sphere of the World that was originally written around 1230.[/caption]

How and why did the flat-earth myth get started? The legend entered history when Washington Irving published his three-volume History of the Life and Voyages of Christopher Columbus (1828). Irving, best known for “The Legend of Sleepy Hollow” and “Rip Van Winkle,” used his fiction-writing skills to fabricate a supposed confrontation that Columbus had with churchmen who maintained that the Bible taught that the earth was flat. No such encounter ever took place. Samuel Eliot Morison, a noted Columbus biographer, describes the story by Irving as “misleading and mischievous nonsense,… one of the most popular Columbian myths.” ((Samuel Eliot Morison, Admiral of the Ocean Sea: A Life of Christopher Columbus (Boston, MA: Little, Brown and Co., 1942), 89.))

Irving’s fictionalized account of Columbus describes him as being “assailed with citations from the Bible and the Testament: the book of Genesis, the psalms of David, the orations of the Prophets, the epistles of the apostles, and the gospels of the Evangelists. To these were added expositions of various saints and reverend Commentators. . . . Such are specimens of the errors and prejudices, the mingled ignorance and erudition, and the pedantic bigotry, with which Columbus had to contend.” ((Quoted in Russell, Inventing the Flat Earth, 53.)) There is only one problem with Irving’s account: “It is fabrication, and it is largely upon this fabric that the idea of a medieval flat earth was established.” ((Russell, Inventing the Flat Earth, 53.))

Similar to maps today, medieval maps were flat. “The mappae mundi [below] interpreted the world in spiritual as well as geographical terms, and included Biblical illustrations as well as portrayals of Classical learning and legend. As pictorial descriptions of the outside world, these impressive maps were also educational; they were used for teaching natural history and classical legends, and reinforcing religious beliefs.” 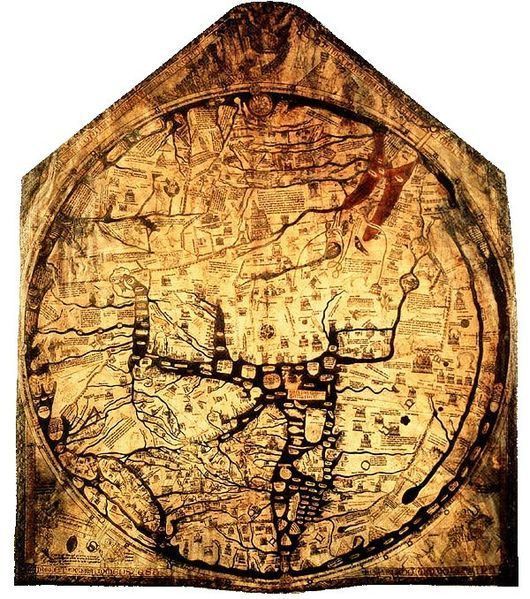 Boorstin asserts that from A.D. 300 to at least 1300, Europe suffered under what he describes as “scholarly amnesia” due to the rise of “Christian faith and dogma [that] suppressed the useful image of the world that had been so slowly, so painfully, and so scrupulously drawn by ancient geographers.” ((Boorstin, The Discoverers, 100.)) He also claims that the scientific advances made by the Greeks were dismantled by Christians based on an appeal to the Bible. It is actually the Bible, independent of any competing cosmology, which supports the empirical data that the earth is a globe:

Scientific demonstration of the earth’s rotundity was enforced by religion; God made the earth a sphere because that was the most perfect form. In the Old Testament there is a reference to this in Isaiah xl.22: “It is he that sitteth upon the circle of the earth”—“circle” being the translation of the Hebrew khug, sphere. ((Samuel Eliot Morison, The European Discovery of America: The Northern Voyages (New York: Oxford University Press, 1971), 6.)) 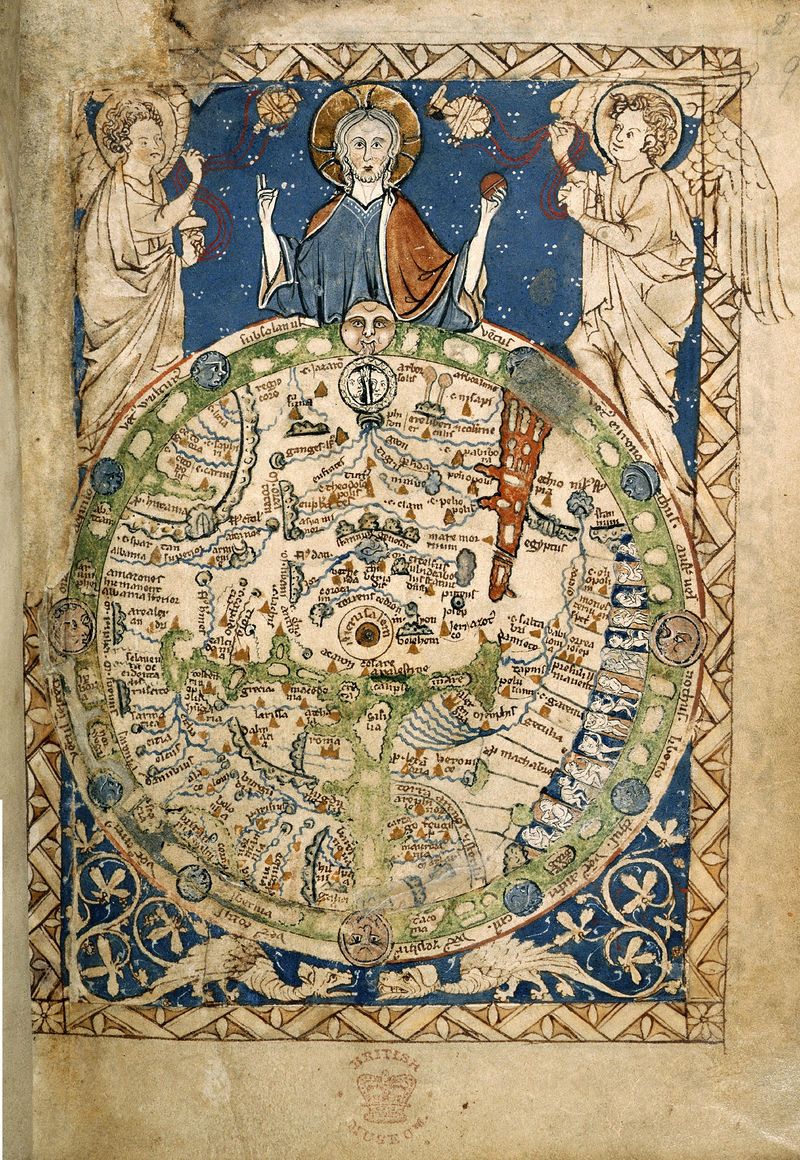 Of course, not all Christians made appeals to the Bible for their views of the shape of the earth. Actually, the Bible has little to say on the subject. Nothing in the Bible, however, contradicts the empirical data. For example, Venerable Bede (673-735), a monk of Jarow and “the Father of English history,” maintained “that the earth is a globe that can be called a perfect sphere because the surface irregularities of mountains and valleys are so small in comparison to its vast size.” He specifies that the “earth is ‘round’ not in the sense of ‘circular’ but in the sense of a ball.” ((Russell, Inventing the Flat Earth, 20.))

The debate in Columbus’s day was not over whether the earth was flat or round. “The issue was the width of the ocean; and therein the opposition was right.” ((Morison, Admiral of the Sea, 89.)) Columbus had underestimated the circumference of the earth and the width of the ocean by a significant number of miles. “In fact, the distance Columbus was planning to cover [based on accurate maps] was 10,600 miles by air.” ((Kenneth C. Davis, Don’t Know Much About History: Everything You Need to Know About American History but Never Learned (New York: Crown Publishers, 1990), 6.)) Providentially for Columbus and his edgy crew, the Americas stood in his way.

Even considering his mistaken conclusions about measurements, “Columbus always rates the highest accolades from scholars when it comes to seamanship. He was, without question, the finest sailor of his time.” ((Robert H. Fuson, The Log of Christopher Columbus (Camden, ME: International Marine Publishing Co., 1987), 29.)) Virtually every student of Columbus accepts the opinion of Bartolome de Las Casas (1484–1566), who wrote in his Historia de las Indias, that “Christopher Columbus surpassed all of his contemporaries in the art of navigation.” ((Quoted in Fuson, The Log of Christopher Columbus, 29.))

The Columbus myth is another example of historical revisionism, the attempt by secularists to cast the Church in a negative light. Liberal historians relish the fact that schoolchildren all over the country are being taught that Christians are ignorant, flat-earth kooks who will not listen to reason and science. When the facts of history are accurately surveyed, however, we discover true science never conflicts with the Bible. Scientific misinformation is never promoted through an accurate understanding of the Bible. Instead, the manipulation of truth always occurs outside the biblical worldview.