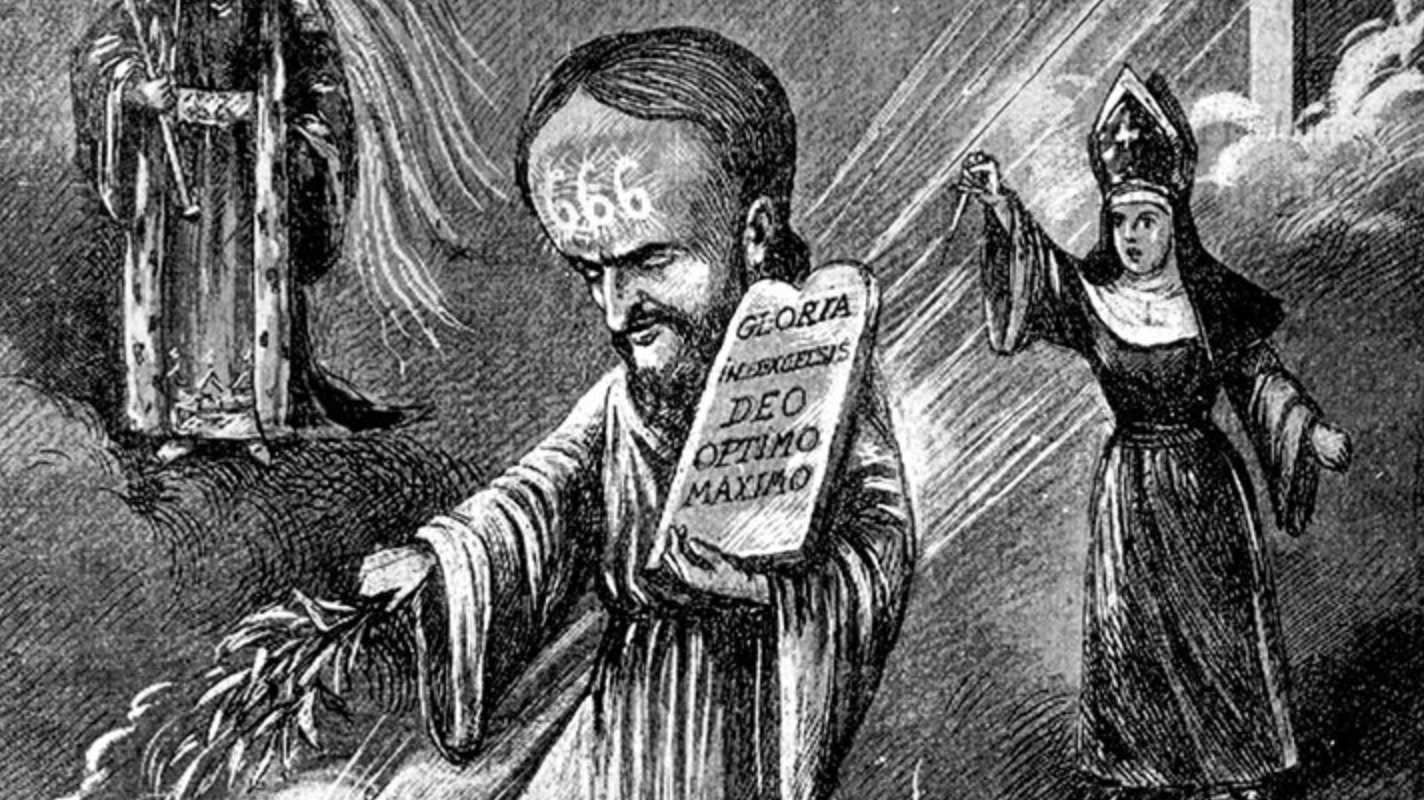 Like clockwork, when something bad happens in the world, Bible prophecy prognosticators start with their end-time claims. They are part of a “thought collective” where adherents share their beliefs in a closed system using the same language and shortcut responses to those who criticize their conclusions. When challenged with this question, “Where in the Bible does it say that?,” they avoid answering directly by offering a formula response that comes from the safety of the “thought collective” bubble.

It happens every time some new prophecy claim is made about current events and challenged. Here’s the latest since Joe Biden might be our nation’s next President:

It is amazing to see prophecy being fulfilled right before our eyes.

How many times have you read something like the above? How many generations of failed prophetic predictions do we have to endure before Christians say “enough”?

Then I saw this:

There are only four passages in the Bible that use the word “antichrist.” You won’t find the word “antichrist” in the book of Revelation. The fact surprises a lot of prophecy enthusiasts. Not one of these passages mentions anything about the antichrist ruling anything. Read the passages for yourself from John’s epistles that were written before the temple was destroyed in AD 70:

When I pointed out these biblical facts, I was dismissed with, “I respectfully disagree.” He didn’t tell me why he disagreed. It might be due to the fact that the passages are as clear as can be and do not fit today’s general understanding of the antichrist.

Notice that there were “now many antichrists” (1 John 2:18). “Now” refers to John’s day, a point made in again 1 John 4:3. In 1 John 2:22, we find, “Who is the liar but the one who denies that Jesus is the Christ? This is the antichrist, the one who denies the Father and the Son.” In 2 John 7, we find a definition that compliments what we read in 1 John 2:22: “For many deceivers have gone out into the world, those who do not acknowledge Jesus Christ as coming in the flesh. This is the deceiver and the antichrist.”

John’s definition of antichrist is exclusively theological. Nothing is said about a charismatic leader solving the Middle East conflict, promising to rid the world of terrorism, getting the Jewish nation and the Arab nations to sign a peace treaty that will pave the way for the long awaited Third Temple (of which the New Testament says nothing), a satanic superman, namely, “the most evil man that ever lived."

Who were these antichrists? They were Jews who understood the claimed relationship between Jesus and His Father. “I and the Father are one,” Jesus said (John 10:30). The Jews objected “and took up stones again to stone Him” (10:31).

Jesus answered them, “I showed you many good works from the Father; for which of them are you stoning Me?” The Jews answered Him, “For a good work we do not stone You, but for blasphemy; and because You, being a man, make Yourself out to be God.” (10:32–33).

“If I glorify Myself, My glory is nothing; it is My Father who glorifies Me, of whom you say, ‘He is our God’; and you have not come to know Him, but I know Him; and if I say that I do not know Him, I will be a liar like you, but I do know Him and keep His word. “Your father Abraham rejoiced to see My day, and he saw it and was glad.” So the Jews said to Him, “You are not yet fifty years old, and have You seen Abraham?” Jesus said to them, “Truly, truly, I say to you, before Abraham was born, I am.” Therefore they picked up stones to throw at Him, but Jesus hid Himself and went out of the temple (John 8:55–59).

John described these unbelieving Jews as a “synagogue of Satan” (Rev. 2:9; 3:9), a type of “thought collective” who denied the reality of God’s revealed Word and instead adopted a type of anti-Messianic group think.

While tens of thousands of Jews embraced Jesus as the promised Messiah (read the book of Acts), many Jews rejected Him. They held on to the tradition of the elders and chafed under the claim that the old covenant was temporary and was in the process of passing away (Heb. 8:13).

After answering some of the responses about the antichrists and how those defining the term were not following the biblical definition, the topic of the great tribulation came up. It is during this supposed future event that the antichrist is said to make his appearance. John does not say anything about this claim. Neither does Jesus in Matthew 24:21.

I responded with the following:

The great tribulation is a past event that took place before the generation to whom Jesus spoke passed away. See my book Last Days Madness. John described himself as a “fellow-partaker in the tribulation” (Rev. 1:10).

What was the response of the person who posted the meme?: “I respectfully disagree.”

I responded with: “Disagreeing is not a refutation.” His answer is typical of a “thought collective” response in that it must stay within the narrow confines of the prophetic paradigm. Any attempt to question it must be rebuffed even if it goes against what is specifically stated in Scripture or what’s not stated.

F. F. Bruce wrote: “The phrase ‘this generation’ is found too often on Jesus’ lips in this literal sense for us to suppose that it suddenly takes on a different meaning in the saying we are now examining. Moreover, if the generation of the end-time had been intended, ‘that generation’ would have been a more natural way of referring to it than ‘this generation.’” ((F. F. Bruce, The Hard Sayings of Jesus (Downers Grove, IL: InterVarsity Press, 1983), 227.))

How is it possible that the tribulation leading up to the destruction of Jerusalem in AD 70 could be “a great tribulation, such as has not occurred since the beginning of the world until now, nor ever shall” (Matt. 24:21). Because this was a covenantal judgment event. Jesus was not describing what would happen to the whole world. Jesus uses the same wording that’s found in Ezekiel 5:9 that describes Jerusalem’s desolation and judgment that took place in the 6th century BC:

“Thus says the Lord GOD, ‘This is Jerusalem; I have set her at the center of the nations, with lands around her. ‘But she has rebelled against My ordinances more wickedly than the nations and against My statutes more than the lands which surround her; for they have rejected My ordinances and have not walked in My statutes.’ “Therefore, thus says the Lord GOD, ‘Because you have more turmoil than the nations which surround you and have not walked in My statutes, nor observed My ordinances, nor observed the ordinances of the nations which surround you,’ therefore, thus says the Lord GOD, ‘Behold, I, even I, am against you, and I will execute judgments among you in the sight of the nations. ‘And because of all your abominations, I will do among you what I have not done, and the like of which I will never do again. ‘Therefore, fathers will eat their sons among you, and sons will eat their fathers; for I will execute judgments on you and scatter all your remnant to every wind. ‘So as I live,’ declares the Lord GOD, ‘surely, because you have defiled My sanctuary with all your detestable idols and with all your abominations, therefore I will also withdraw, and My eye will have no pity and I will not spare. ‘One third of you will die by plague or be consumed by famine among you, one third will fall by the sword around you, and one third I will scatter to every wind, and I will unsheathe a sword behind them (Ezek. 5:5–12).

This type of language is rhetorical hyperbole that’s used often in the Bible (e.g., Ex. 11:6; Acts 2:5; Col. 1:23; 1 Kings 3:12 compare with Matt. 12:41; 2 Kings 18:5 compare with 2 Kings 23:25). One of the commenters wrote that the “great tribulation is defined in Scripture as ‘a rut that cannot be escaped from.’” If this is the definition of the great tribulation, then it does not comport with what the Bible says about escaping it.

The great tribulation described by Jesus could be escaped on foot by fleeing “to the mountains” outside of Judea (Matt. 24:16). The conditions described by Jesus are indicative of first-century Israel: houses had flat roofs, the Sabbath was still operating, and a person’s cloak “is the one thing that is so precious and needful that it cannot be taken as a pledge during the nighttime hours, but has to be returned each night to its owner [Ex. 22:26-27].”

Luke’s version includes some of the same generation-defining elements of the prophecy and includes, “when you see Jerusalem surrounded by armies, then recognize that her desolation is at hand” (21:20). This means that the great tribulation described by Jesus could be escaped and was escaped by those who listened to Jesus and headed for the hills like Lot did. Those who did not, ended up like Lot’s wife, caught in the fiery conflagration.