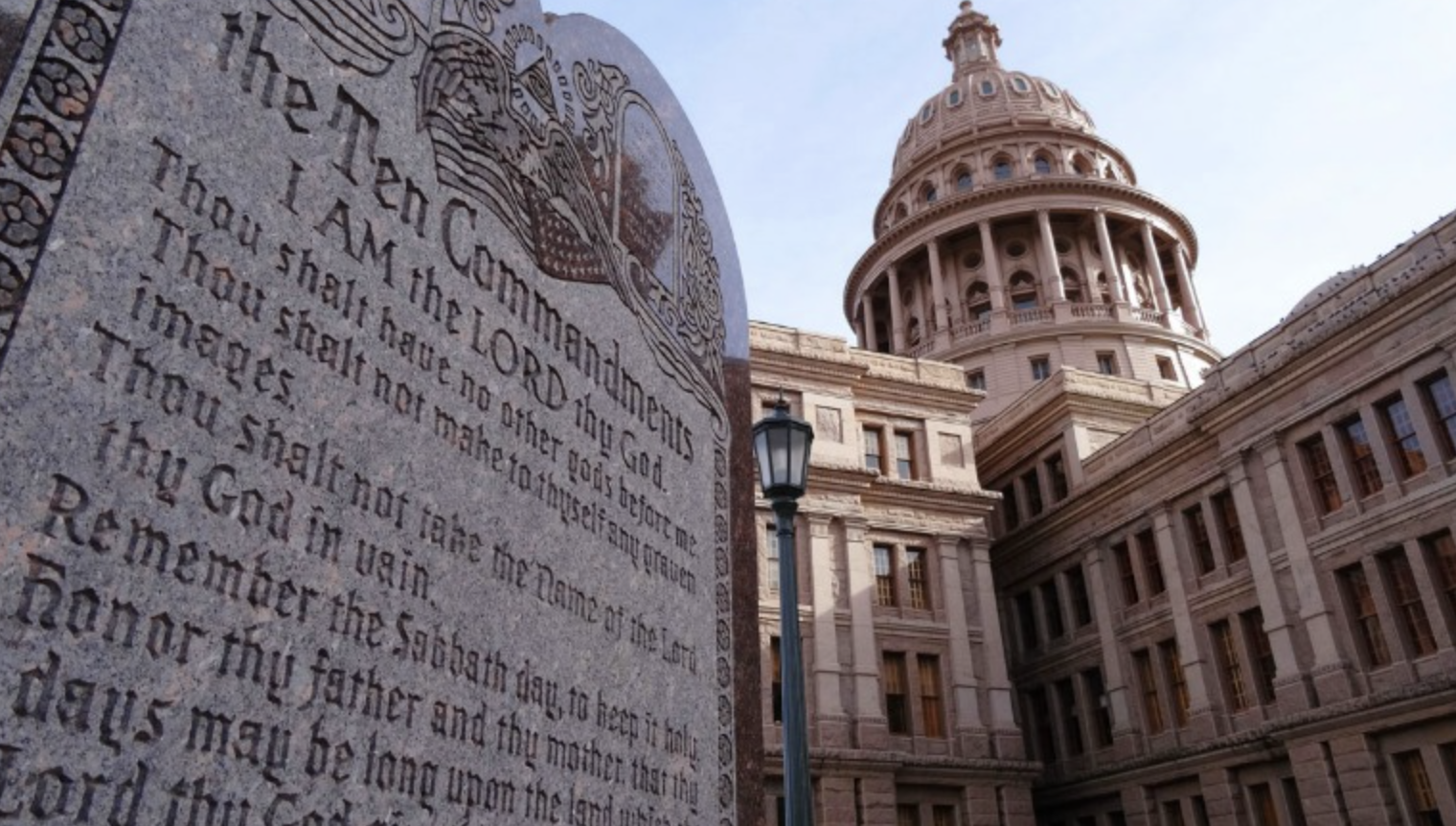 The following article is my third response to a journalism and political science major who sent me questions to answer for a research paper she was writing. (Read Part One and Part Two) Here’s the multi-part question:

Roy Moore also landed himself in some controversy when he began refusing to recognize federal court orders regarding marriage equality. Does American Vision believe that Moore’s actions aid in the restoration of America to its Biblical Foundation?

A constant attack on Judge Roy Moore, who was the Republican candidate for the US Senate special election in Alabama in 2017, was that he violated his oath by not acquiescing to the Supreme Court’s ruling on same-sex marriage. Like Martin Luther King, Jr., Moore was following a higher law and the rights afforded to the states in the Ninth and Tenth Amendments to the Constitution.

[W]hen your rulers acknowledge no God above them, then you are just ten minutes away from them claiming to be the only God above you.

Enter Roy Moore, and his disregard for the “rule of law.” He was told to take down the Ten Commandments, and he did not. He was told to kiss the Obergefellian ring, and he declined. Renegade or hero?…

The rule of law really is precious, and is essential to any stable society. But we need to identify who the real troublers of Israel might be. Was it really Elijah, for identifying the problem? Or was it Ahab, who had married the problem? When the law has been made a laughingstock by the lawless, what is the only appropriate response?

Once the State is empowered to redefine everything, there is nothing it can’t and won’t define in order to retain its power.

Christian apologist Francis A. Schaeffer wrote, “Let us not forget why the Christians were killed. They were not killed because they worshipped Jesus…. Nobody cared who worshipped whom as long as the worshipper did not disrupt the unity of the state, centered in the formal worship of Caesar. The reason Christians were killed was because they were rebels” ((How Should We Then Live?: The Rise and Decline of Western Thought and Culture (Wheaton, IL: Crossway Books, 1976), 24.)) and placed the God of the Bible over the claim that the State and its Caesars were gods. This is why that those who brought charges against Paul and his local followers charged them acting “contrary to the decrees of Caesar, saying that there is another king, Jesus” (Acts 17:7).

This is an old story that has a modern history. King James of King James Bible fame wanted a translation that countered the notes in the 1559 Geneva Bible, the Bible of the Puritans and Pilgrims. “For example, the margin notes for Daniel 6:22 imply that the commands of kings are to be disobeyed if they conflict with the law of God: ‘For he [Daniel] disobeyed the king’s wicked commandment in order to obey God, and so he did no injury to the king, who ought to command nothing by which God would be dishonored.’” ((Vishal Mangalwadi, The Book That Made Your World: How the Bible Created the Soul of Western Civilization (Nashville, TN: Thomas Nelson, 2001), 156.))

Notice also how the Genevan notes regularly use the word “tyrant” to refer to kings; the King James Bible never uses this word—a fact noted with approval as much as relief by many royalists at this point. ((Quoted in Mangalwadi, The Book That Made Your World, 156.))

It’s no wonder that King James “authorized a fresh translation of the Bible to undermine the republican implications of the Geneva Bible.” ((Mangalwadi, The Book That Made Your World, 156.))

Because of its no exception tone, Romans 13 is seen as prohibiting all resistance to the law of the State: “Let every person be in subjection to the governing authorities…” (v. 1). The apostle lists no exceptions. Peter makes a similar statement: “Submit yourselves for the Lord’s sake to every human institution, whether to a king as the one in authority, or to governors as sent by him for the punishment of evildoers and the praise of those who do right” (1 Peter 2:13–14). Again, no exceptions. This is the same Peter who declared, “We must obey God rather than men” (Acts 5:29; cf. 4:19–20). How do we reconcile the apparent contradiction?

Jonathan Mayhew (1720–1766) states the following in his 1750 sermon “Concerning Unlimited Submission and Non-Resistance to the Higher Powers”:

Thus, upon a careful review of the apostle’s reasoning in this passage, it appears that his arguments to enforce submission, are of such a nature, as to conclude only in favor of submission to such rulers as he himself describes; i.e., such as rule for the good of society, which is the only end of their institution. Common tyrants, and public oppressors, are not entitled to obedience from their subjects, by virtue of anything here laid down by the inspired apostle.

There are several places in Scripture where one verse speaks in absolute terms and other verses offer exceptions. This is not unusual. If I tell my grandchildren to go outside and play until dinner is ready, I have spoken in absolute terms. They are not to come into the house until they are called. No exceptions are given. What if it rains? What if a large dog enters the yard? Can they enter the house without violating my absolute and no exception command?

They would not be violating my “no exception” command because there are past and wisdom-related unspoken exceptions. They are assumed to be operating without them having to be repeated each time a new command is given. They have been told on previous occasions to “come in when it’s raining and lightning” and “do not get near stray dogs that wander into the yard.”

The Bible operates in the same manner. In one place Jesus says, “All those who take up the sword shall perish by the sword” (Matt. 26:52). Does this include the civil magistrate who is legitimately given the authority and power of the sword? What about the person who strikes an assailant in self-defense? Is this not an exception to Jesus’ “no exception” statement? Since the Bible already discusses self-defense (Ex. 22:2–3; Deut. 19:21) and the role of the civil magistrate (e.g., Gen. 9:6), there is no need to repeat the exceptions since Jesus’ hearers knew He has anarchy and revolution in mind (e.g., Lev. 19:18), not the just use of the sword. Romans 13:4 explains that it is the duty of the civil magistrate to use the sword in certain specified cases. Is this a contradiction? No.

So then, when we read passages like Romans 13:1 and 1 Peter 2:13–14, we must not neglect the rest of the Bible that is equally authoritative and more fully explains and qualifies these passages.

Many general statements of Scripture must be open to admitting exceptions even if those qualifications are not immediately spelled out. Why are so many generalizations stated without qualification? Because the exact conditions restricting their applicability are not known, or because the “accidental” or providential circumstances that render them inapplicable occur so seldom as to be practically negligible, or because such qualification has already been stipulated in another inscripturated context. ((Jim West, “Rahab’s Justifiable Lie,” in Christianity and Civilization: The Theology of Christian Resistance, ed. Gary North (Tyler, TX: Geneva Divinity School Press, 1983), 68. Italic in original.))

In summary, we must recognize that as the State becomes more tyrannical and non-Christian in its social and political policies, conflicts between Church and State will multiply. That conflict may make it necessary for Christians to say no to Statist laws that will force them to violate the laws of God.

There is an additional reason why Christians must understand the limits of civil jurisdiction and the limits of resistance. Because of a desire to see the current corruption in our own nation reversed, some Christians may take it upon themselves to bring about change by revolutionary means. This is an unbiblical agenda to pursue. There is no warrant in Scripture for a revolutionary spirit or action.

How Christians go about resisting is a question that needs to be answered in exacting detail. The fact that we have lesser magistrates—state governments, governors, and state constitutions—that can serve as legitimate governing authorities as a legal way to rebuff civil and judicial tyranny is a viable governing avenue for Christians to take.

Archie Jones explains it well in his book Gateway to Liberty:

Unlike the anarchists who have been burning down some of our cities, the Constitution offers an orderly and governmental remedy when it comes to government overreach. Each state has the authority and power to block laws that are not enumerated in the national Constitution. The Supreme Court has not been empowered to legislate, and the Constitution is not empowered to define or redefine marriage. We are back to “by what ultimate standard?” and “who ultimately says?” The Constitutions places the ultimate authority in “We the people….” Rule by the majority can be as tyrannical as rule by a Caesar or an oligarchy like the Supreme Court. That’s why our founders rejected direct democracy as well as a monarchy. They spelled this out in the Federalist Papers, popular newspaper articles written by Alexander Hamilton, James Madison, and John Jay in defense of the ratification of a national constitution to replace the Articles of Confederation. In Federalist 10, Madison described democracies as “spectacles of turbulence and contention” that are “incompatible with personal security or the rights of property…. In general [they] have been as short in their lives as they have been violent in their deaths.”

The people, who are not ultimate governors, must ensure that they are not using the power of the State to benefit them in terms of power, control, influence, and financial assistance.