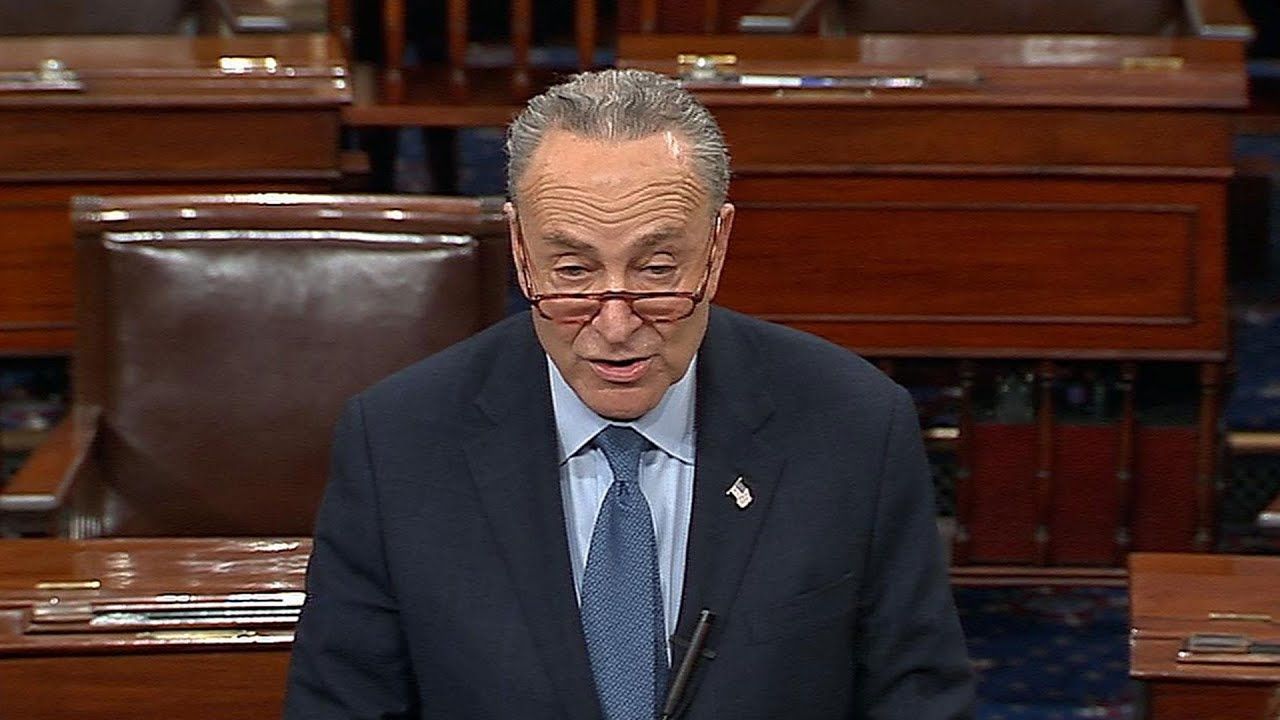 Since Donald Trump beat Hillary Clinton and the Democrats in 2016, Democrats have said some very bad things about him, his supporters, and the United States.

The nomination and confirmation of Amy Coney Barrett has driven these people to the lowest of low when it comes to disparaging people they disagree with.

How many times have you heard Democrats tell us that Joe Biden will unify the nation. Don’t you believe it. There is no common ground between the Democrats and Republicans. The Democrats are revolutionaries dressed up in nice clothing. They are content to let their revolutionary minions burn down our cities while they bloviate that Trump supporters will destroy Democracy.

The following speech was given by Sen. Chuck Schumer of New York.

Today, Monday, October 26, 2020, will go down as one of the darkest days in the 231-year history of the United States Senate.

Let the record show that tonight, the Republican Senate majority decided to thwart the will of the people and confirm a lifetime appointment to the Supreme Court in the middle of a presidential election, after a more than sixty million Americans have voted.

Let the record show that tonight, the Republican majority will break 231 years of precedent and become the first majority to confirm a Supreme Court Justice this close to election day.

And let the record show that tonight, the Republican majority will make a mockery of its own stated principle—that the American people deserve a voice in the selection of Supreme Court Justices—completing the partisan theft of two seats on the Supreme Court using completely contradictory rationales.

Let the real record show that Pres. Trump was elected for four full years, a term that does not expire until around mid-January 2021.

Let the record also show that the people did vote on Pres. Trump’s promise to nominate constitutionalists to the Supreme Court if the opportunity arose.

And let the record show that the American people—their lives, and rights, and freedoms—will suffer the consequences of this nomination for a generations.

I hope Schumer is right about this, but not in the way he intends it.

This entire debate can be summed up in three lies propagated by the Republican majority, and one great, and terrible truth.

The first lie is that the Republican majority is being consistent in following its own standard. What rubbish.

After refusing a Democratic nominee to the Supreme Court because an election was eight months away, they will confirm a Republican nominee before an election that is eight days away.

What’s Leader McConnell’s excuse? He claims that the principle of not confirming Justices in presidential years only applies when there’s divided government. But this is what Leader McConnell said after Justice Scalia died: “The American people should have a voice in the selection of their next Supreme Court Justice.”

But in his tortured, convoluted history lesson, Leader McConnell left out a whole bunch of chapters. He omitted that Republicans bottled up more than 60 judicial nominees by President Clinton, refusing them even a hearing. He made no reference to the decision by Republican Senators to hold open 14 appellate court seas in the 1990s so that a Republican president could fill them instead—a tactic Republicans would revisit under President Obama, when Republicans used partisan filibusters to block his nominees to the DC circuit.

Again, elections have consequences. And let’s not be naïve here. Democrats would have done the same thing. This is the way the game is played. In the case of Supreme Court Justice Amy Coney Barrett, the Republicans finally figured it out that you can’t compromise with the Democrats.

Let’s not forget how the Democrats treated Robert Bork, Clarence Thomas, and Brett Kavanaugh. Schumer’s criticisms are falling on deaf ears. Hopefully the Republicans have learned their lesson. Even Mitt Romney and Lisa Murkowski voted to confirm Barrett.

And the third and perhaps the greatest lie is that the Republican majority is confirming Judge Barrett solely on the basis of her qualifications, not based on her views on the issues.

My colleagues insist that Judge Barrett should be confirmed on her credentials alone. That’s all they talk about. They don’t talk about her views on the issues, only qualifications.

Well, this canard is about as transparent as a glass door. Everyone can see right through it. What is the real reason Republicans are so desperate to rush Judge Barrett onto the Supreme Court? Of course it’s not because of her qualifications!

As if the Democrats don’t choose justices based on their views. The fact that every Democrat opposed Judge Barrett because of her views demonstrates what hypocrites they are. What they really don’t like about Judge Barrett’s views is that she exposed how the Supreme Court has been used as a second legislative branch by the Democrats who could not pass their infernal laws through Congress.

Republicans would never dare to attempt to repeal Roe v. Wade in Congress, so they pass onerous laws in state legislatures, that they control, to drive that right to point of near extinction, and then provoke the Supreme Court to review Roe v. Wade. The far-right has never held a majority on the Court to limit Roe v. Wade or Griswold. But if Judge Barrett becomes Justice Barrett—it very well might.

The Left is all about upholding stare decises. Once the SCOTUS rules on an issue, it is permanent law. Period. It can never be looked at again. The fact that so many decisions have been made by five unelected judges should trouble every American. Again, the Supreme Court is not our legislative branch of government.

Stop pretending that the political right doesn’t spend millions of dollars to prop up the far-right Federalist Society and support certain judicial candidates because they  only want “qualified judges.”

No—they want to systematically and permanently tilt the Courts to the far-right.

Once again we see the blatant hypocrisy of Schumer as if the Democrats and their Leftist special interest groups and media accomplices don’t work to steer legislation and court decisions to the political radical Left.

Only a few hours ago, the Republican Senator from Missouri proudly declared from the Senate floor that Judge Barrett is the most “openly pro-life judicial nominee to the Supreme Court” in his lifetime. “This is an individual,” he said of Judge Barrett: “who has been open in her criticism of that illegitimate decision, Roe v. Wade.” He was being more honest than most of the talk we’ve heard—saying it’s only about qualifications.

In the end, it’s all about killing unborn babies. Who could have imagined 50 years ago that a United States Senator could extol the right of women to kill her unborn children from the point of conception to the point of birth? But that’s what Chuck Schumer is calling for and wants engraved in stone, locked in a vault, and protected by a military force.

And I will add, homosexual rights and the 70+ genders that go with this abomination. You see, Chuck Schumer has a vested interest in this since his daughter is a homosexual who has “married” a woman. Let’s not forget that presidential candidate Joe Biden supports eight-year-olds making a decision to change their sex.

Schumer went blathering on for a few more minutes declaring that the Republicans will regret nominating a constitutionalist to the Supreme Court who may bring sanity to a government body that has been out of control for most of its establishment.

Here’s the most hypocritical and blackest remark made by Schumer, and he didn’t even know how blatantly evil it was.

Generations yet unborn will suffer the consequences of this nomination.

Can you believe that he said this? “Generations yet unborn”? This from a the man and his party that has no regard for the unborn.

“One of the darkest days in the 231-year history of the Senate” was having to listen to Sen. Chuck Schumer’s litany of Leftist propaganda, moral evil, and hypocrisy.

This is not the old ‘Republicans versus Democrats,’ where we all have the same objectives, just different philosophies on how to get there. They do not have those objectives any more. Their purpose is to erase the Constitution, start over rewriting it, eliminating the concept of ‘The citizen has rights which prevail over government.’