The homosexual movement went from “sexual preference” to “sexual orientation” overnight when Amy Coney Barrett used “sexual preference” during her Supreme Court nomination inquisition. Homosexuality is now a protected class. The Orwellian editors of the Merriam-Webster Dictionary “added the word ‘offensive’ to its entry and usage guidance of ‘preference’ and ‘sexual preference’ when referring to sexual orientation after the issue came up during Supreme Court confirmation hearings for Judge Amy Coney Barrett.” (USA Today) 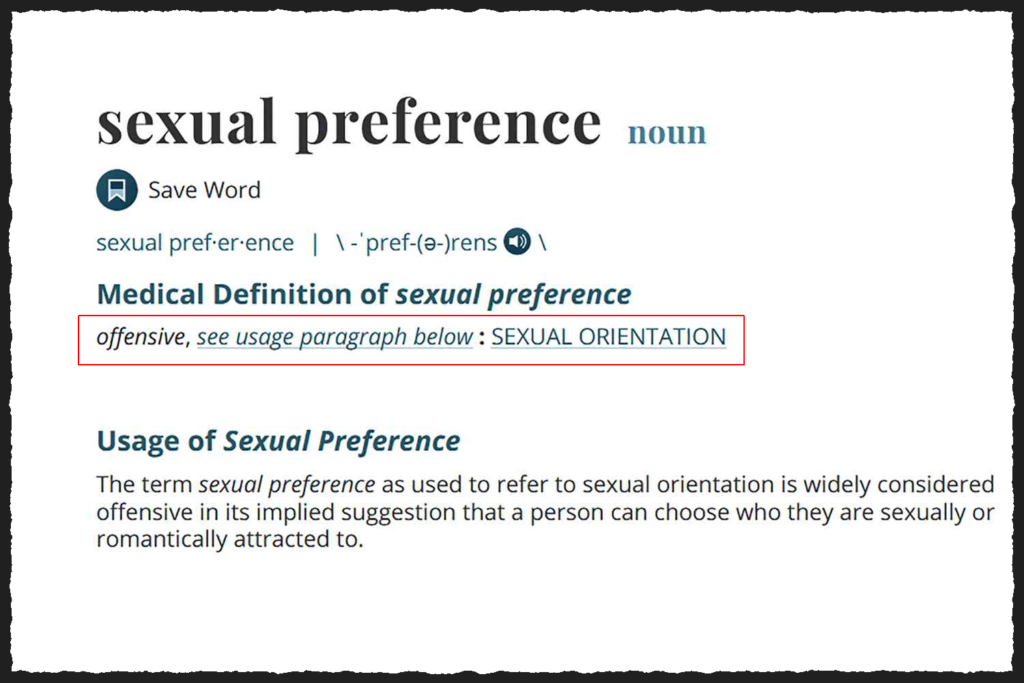 Let’s not forget that it was the homosexuals who adopted the phrase “sexual preference” for their, well, “sexual preference.” Homosexuals have done everything they can to hide their behavior from the public. “Gay" rights? What does “gay” have to do with certain types of sexual behaviors? Nothing. The word is designed to obscure what is indecent and immoral.

Before Frank Schaeffer went over to the Dark Side, he had some good things to say about how liberals think and act. His analysis of language is still applicable even though he most likely regrets writing it:

Think of the use of labels to categorize political activity. Some labels are used to neutralize the actions of certain groups; others denote being “one of us,” acceptable. The words “right wing,” “fundamentalist,” “pro-life,” “absolutist,” and “deeply religious,” are put-downs more than categories. Conversely, think of the unspoken pat on the back and blessing that the following words convey: “moderate,” “pluralistic,” “liberal,” “civil libertarian,” “pragmatic,” and “enlightened.” ((Franky Schaeffer, A Time for Anger: The Myth of Neutrality (Westchester, IL: Crossway Books, 1982), 15.))

Wikipedia will no longer permit editors to criticize or call into question homosexual marriage.

Why is pushing “sexual orientation” being adopted as the new go-to term to describe all types of sexual abnormalities? Because if a person is born that way, he or she is absolved of all criticism.

Don’t you find it curious that a person is celebrated for leaving a heterosexual life and becoming homosexual, but when someone abandons a same-sex lifestyle, he or she is ignored or ostracized? LGBTQ is a one-way street.

For the sake of argument, let’s assume there is “mounting scientific evidence” for a “gay gene,” a genetic orientation. Is there a bisexual gene? A transgender gene? A gene for each of the more than 70 genders? If there are identifying genes, please produce them. Scientists won’t because they can’t because they don’t exist.

There is a problem of other behaviors that are an “orientation” that claim to have a genetic cause.

For years I have been collecting articles on genetic explanations for various abnormalities. Some are behavior related (eating too much) and some are disease-related (prostate and breast cancer). In each case, however, the genetic cause is viewed as undesirable. Extraordinary measures are recommended to fix the flaw. When scientists say they had discovered a “fat gene,” “the finding was hailed by other researchers as pointing to a day when drugs might correct imbalances that cause some people to be hounded by food cravings and extra pounds while others remain lean.” ((Jeff Nesmith, “Dieters’ dream: Gene to control fat found,” Atlanta Constitution (December 1, 1994), C1.))

If the cause of fatness is genetic, as homosexuals claim is true of their “orientation,” then why isn’t the diet industry a hate group? If you’re fat, it’s not your fault. Anyone who proposes that a fat person should get thin, considering homosexual logic, is “fatophobic.” An advertisement for Ultra-Metabolism carries this claim: “Learn how food can change your genes!” ((The advertisement appeared in the June 20, 2006 issue of USA Today (4D) for Mark Hyman’s Ultra-Metabolism (New York: Scribner/Simon & Schuster, 2006).)) If being fat is genetic, why change your genetic oriented condition?

Of course, the advertisement implies that genes can be changed. If this is true regarding being fat, then it can be true for engaging same-sex orientations.

Eleven cousins had their stomachs removed because they carried a “rare hereditary stomach cancer that killed their grandmother and some of their parents, aunts and uncles.” ((“11 cousins have their stomachs removed,” USA Today (June 20, 2006), 6D.)) Women often take drastic measures if they found out they have a gene that indicates breast cancer. At age 37, Angelina Jolie underwent a preventive double mastectomy after learning she had an 87% risk of developing breast cancer due to a defective BRCA1 gene. Why do this if being born that way does not carry any negative connotations?

Just because something is genetic does not make it a desirable trait. Here are some examples of gene-related conditions that are undesirable:

Note that in these cases, a gene has been found. This can’t be said for the supposed 72 genders that are said to exist. These and many more examples show that not all genetic traits are benign. Just because a trait is genetic does not mean it is good or moral.

Why is it that only homosexuality gets a genetic pass? If we follow the orientation logic, should we decriminalize violent acts, racism, and rape?

The orientation line of argument reminds me of a scene from the movie The African Queen (1951). Charlie Allnut (Humphrey Bogart) and Rose Sayer (Katherine Hepburn) are traveling down the very dangerous Ulanga River in German-occupied East Africa during World War I in an attempt to avoid capture by the Germans. Rose is a conservative Christian missionary and Charlie makes his living operating a mail boat hauling supplies throughout the region.

In contrast to Rose’s character, Charlie is what we might describe as a “social liberal” who likes his gin a bit too much. After passing out after one of his regular bouts with the bottle, Charlie wakes up to see Rose pouring the contents of one of his precious gin bottles into the river. Charlie is visibly upset as he appeals to her with a less than convincing argument:

Oh, Miss. Oh, have pity, Miss. You don’t know what you’re doing Miss. I’ll perish without a hair of the dog. Oh, Miss, it ain’t your property.

Seeing that he’s getting nowhere with his take-pity-on-me pleading, he appeals to the Bible:

Uh, how’s the Book, Miss? [referring to the Bible]. Well, not that I ain’t read it, that is to say, my poor old Mum used to read me stories out of it. How’s about reading it out loud? I could sure do with a little spiritual comfort myself.

After getting the cold shoulder, Charlie lets his emotions fly and yells at her:

And you call yourself a Christian! Do you hear me? Don’t ya? Don’t ya? Huh?

She shows only a slight reaction but doesn’t say a word. He backs up and goes about cleaning the relief valve on the boiler that’s shaped like a cross—symbolic of the impact Rose is having on him and his circumstances. He asks for mercy:

What ya being so mean for, Miss? A man takes a drop too much once and a while; it’s only human nature.

Without looking up, she says the following:

Nature, Mr. Allnut, is what we are put in this world to rise above.

In the end, Charlie reforms. Gives up the battle and marries Rose.