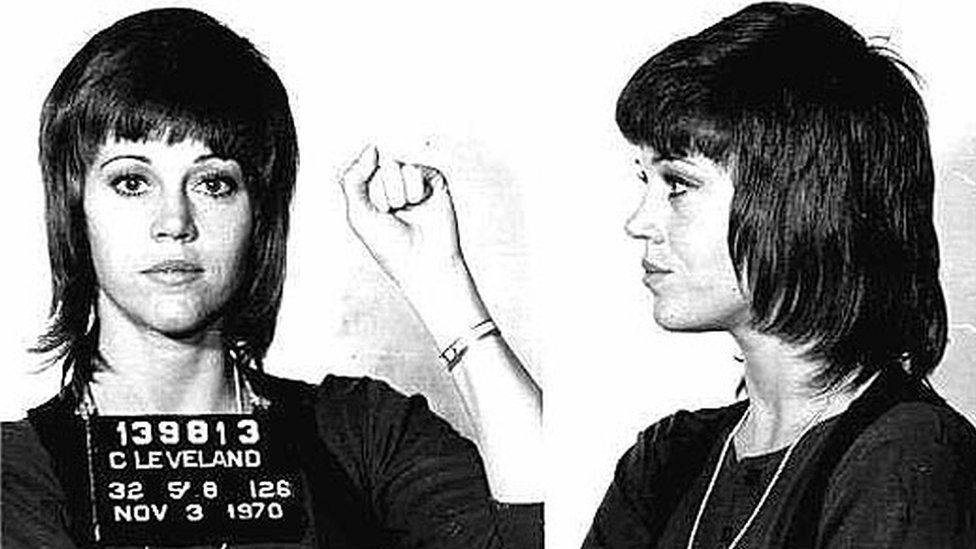 If there are any more Never-Trumper GOPers, pro-Biden Evangelicals, or Third-Party voters left, you need to pay attention to this message from the queen of Leftism, Jane Fonda. She fits all the criteria of a modern-day Leftist — privileged, rich, arrogant, and out of touch with reality.

When the system comes crashing down on us, she’ll be above it all, looking down on all the paeons she has no use for. Don’t be fooled by her good looks, toned body (she used to do exercise videos), and high-priced fashion sense. She’s a fascist dressed in a pants suit.

Her latest proclamation explains why the Left is dangerous and evil. All they care about is raw power to control the masses while they live in gated communities immune to the hardships of the people beneath them who have been affected and disenfranchised by Leftist policies.

She is thankful to a god she does not believe in for a disease that she “prays” will help bring Joe Biden and his fascist policymakers to power.

Joe Biden fundraiser and long-time left-wing actress Jane Fonda is insisting that COVID-19, which has killed over 211,000 Americans, devastated the lives and livelihoods of countless more, and tanked the global economy, is “God’s gift to the left.”

“I just think that COVID is God’s gift to the Left,” Jane Fonda said. “That’s a terrible thing to say. I think it was a very difficult thing to send down to us, but it has ripped the band-aid off who [Trump] is and what he stands for and what is being done to average people and working people in this country.”

She claims she’s interested in “average people and working people in this country.” No, she’s not. She doesn’t care for any of them. It was Trump’s economic policies that lit the economy on fire with record-low unemployment for everyone. Black unemployment, including black youth unemployment, hit record lows. That means record-high employment for people who continue to vote for Democrats and their self-destructive policies.

Fonda’s beloved COVID and draconian government policies tanked the economy, something I’m sure multi-millionaire Fonda was also thankful for even though it did not affect her in any way.

The coronavirus has plunged the world into calamity. Studies and statistics have suggested that the weight of the virus on people’s minds has driven them to drug abuse and subsequent overdoses, and even outright suicides. In October, a report by the American Medical Association warned that COVID lockdowns have increased the use and abuse of opioids. The report found that up to 40 U.S. states have reported higher rates of drug overdoses.

Also, the death rates both directly from the virus and tangentially … only added to the economic destruction wrought by the lockdowns in nations worldwide. One recent reckoning of the loss claimed that the coronavirus has cost the world’s economy $3.8 trillion.

The goal of revolutionaries is to stamp out competition from political opponents. Divide and conquer, pitting one group against another, the threat of imprisonment, loss of a business, persecution, deportation, re-education centers, and denial of gainful employment.

Some say that it can never happen here. But it did happen in nations similar to ours, and it could happen here. In some cities and states, it is happening. Sinclair Lewis wrote It Can’t Happen Here in 1935. It carried the subtitle, “The Novel that Tells You What Will Happen to Your Family if America Gets a Dictator.” A dictatorial political party will even be worse than a fascist like Mussolini but hidden under grandiose political platitudes.

The Democrats have a plan to pack the court, remove the filibuster, make Puerto Rico and Washington, DC, states. There would also be a push to eliminate the Electoral College. This would give the Democrats four more Senators and a majority that would be hard to beat.

The United States would become California. We would be taxed to death, the welfare state would swell, non-government schools would be abolished if they did not follow pro-homosexual and gender-bending requirements. Pastors of churches would be charged with hate crimes if they taught that homosexuality is a sin.

This brings me to political participation. We all have issues with Pres. Trump. But he is the candidate for the times. He took on the Left as no Republican had ever done. How many times were you frustrated that the Republicans caved to the Democrats? They did it all the time. Many continue to do it.

Consider the nomination of Ruth Bader Ginsburg in 1993. What was the vote? Only three Republicans voted against her nomination. Only THREE!

The Democrats Borked Robert Bork, nearly destroyed Clarence Thomas, and Kamala Harris leveled an assault on Brett Kavanaugh that was close to demonic. What type of SCOTUS Justices do you think she and Biden will pick to run your life?

Harris pursued unsubstantiated accusations of sexual misconduct against Kavanaugh. She introduced a letter from a “Jane Doe” who claimed that a young Kavanaugh and a friend had raped her “several times” after offering her a ride home from a party.

She was condemned for an edited video in which she claimed Kavanaugh opposed birth control.

Not to be outdone by these performances, Harris was denounced by conservatives for referring to the U.S. Constitution — which Kavanaugh kept in his pocket — as “that book you carry.” The Constitution is the document she will take an oath to uphold. She’s taken the oath before as a US Senator. How faithful has she been to that oath?

“In 2019, once Kavanaugh was already on the Court, Harris called for him to be impeached over yet another dubious allegation against the justice, which swiftly fell apart.”

Do you want a mentally deficient Biden and an extreme Leftist as vice president running the country? Given the fact that Biden might not even make it a year as President, do you want Kamala Harris as President of the United States picking Supreme Court Justices and packing the court?

Here’s the kicker. Every investigation of the corrupt Democrats will stop. It will be business as usual in our nation’s capital.