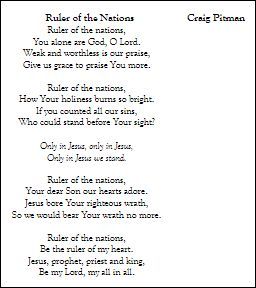 I haven’t seen Craig for some time, but I follow him on Facebook. Recently he posted a great article about the battle over the Supreme Court that I think captures the essence of what it’s all about that speaks well to the “Ruler of the Nations” theme. SCOTUS has become a rule unto itself. Today, five unelected judges are the rulers of the nation. While a true constitutionalist will be a welcome change, it’s not a fundamental or long-term fix.

The Liberals are scared to death that without a Liberal majority on the SCOTUS, Roe v Wade will be overturned. Conservatives are wanting to have a majority on the High Court so that abortion can be ultimately abolished in this country. BOTH GROUPS ARE WRONG!

Stay with me for a moment and I’ll explain why:

Roe is only a “surface” issue that EXPOSES the REAL and SYSTEMIC, ROOT PROBLEM not just with SCOTUS, but also with the American people, both on the RIGHT and on the LEFT.

The reason why the fault lies with the American people is that regardless of which end of the political spectrum we embrace, we are looking to the SCOTUS to resolve the question of abortion and we have neglected a more important question—indeed, THE MOST important question: “Does the Supreme Court even have the authority to decide on the issue of abortion?”

It is ironic that while much has been made this week of the genuine, warm friendship between the late Justices Antonin Scalia and Ruth Bader Ginsburg, hardly any mention has been made of the fundamental judicial philosophies which comprised the bedrock of what divided them. The two justices represented the two competing judicial philosophies regarding the highest court in our land: The “Originalist/Textualist” view, as represented by Justice Scalia, sees the role of the Court as constrained by the text of the Constitution of the United States as it was originally intended by the Founders. The “Judicial Activism” view, as espoused by Justice Ginsburg, believes that the Court is free to interpret the Constitution of the United States any way that it pleases, relying more on precedent than what the Constitution of the United States says.

The “Originalists” hold that the SCOTUS, as the third equal branch of the Federal Gov’t, is bound and constrained by the Constitution of the United States. On the other hand, the “Activists” believe that the Court is not constrained; this means that for all intents and purposes, the SCOTUS is turned from a judicial body into a LEGISLATIVE body. So, we have to realize that in doing so, this body, whose unelected members are appointed for life, with little accountability over it, has become the very definition of an OLIGARCHY. Those of you who fear the President becoming a dictator already give that power to the SCOTUS.

[T]hat this government, created by this compact, was not made the exclusive or final judge of the extent of the powers delegated to itself, since that would have made its discretion, and not the Constitution, the measure of its powers; but that, as in all other cases of compact among parties having no common judge, each party has an equal right to judge for itself, as well of infractions as the mode and measure of redress. (The Kentucky Resolve, November 10, 1798)

O’Barr continues. “Jefferson believed the States had equal authority in judging what was constitutional. In doing so the States were an important check on Federal power. We lost that important check in the hubris of Abraham Lincoln. And now the rights of 328 million Americans are at the mercy of five human beings….”

Roe should be overturned but not only because it is an abhorrent evil (which it is) but because it is an errant ruling based on a fundamentally flawed judicial philosophy. The High Court should never have taken up the case in the first place in the early 1970s.

Friends, this is the REAL battleground; everything else is pretty much secondary. The judicial philosophy embraced by the majority of the SCOTUS will impact this country FOR GENERATIONS. Despite all of the personality flaws and screw-ups of Donald Trump, he has consistently appointed judges to the lower courts and nominees for SCOTUS who embrace an “Originalist” judicial philosophy; certainly better than past appointments and nominees from the Left. This is why I voted for President Trump in 2016 and I intend to vote for him in November of this year.

I am hoping that my friends who are “Never Trumpers” would consider this and what they intend to sacrifice just for the sake of feeling emotionally self-satisfied and morally superior. If this country EVER has a chance of turning around from the disaster we are headed toward, the judicial philosophy embraced by much of the current judiciary and by most citizens will have to be changed back to as it was originally envisioned by the Founding Fathers. More than any other past President, Donald Trump has done this country a major service by his judicial appointments and we should ALL be grateful.