We’ve come to the point in our nation’s history where the battle lines have been drawn. As always, it comes down to two operating propositions: God’s Law or Chaos. The time is long past time for Christians to understand how to approach the worldview war and put on the full armor of God for the battle.

It begins by identifying the “touchstone proposition” of competing worldviews, a proposition that is held to be the fundamental truth about reality that serves as the basis for the starting point for all other thinking and actions.

“Apologetics” does not mean saying you’re sorry for being a Christian. Christians are not called on to apologize for believing in God, the trustworthiness of the Bible, the reality of miracles, and the redemptive work of Jesus Christ that saves sinners from final judgment. The Bible calls on Christians to begin where the Bible begins and defend its truths with an intensity and proficiency similar to the way a lawyer would defend a client who is on trial for his life.

The Greek word apologia (from which we derive the English word >apologetics=) denotes a speech made in defense, a reply (especially in the legal context of a courtroom) made to an accusation. The word originated in the judicial operations of ancient Athens, but the word occurs several times in the New Testament as well. ((Greg L. Bahnsen, “The Reformation of Christian Apologetics,” Foundations of Christian Scholarship, Gary North, ed. (Vallecito, CA: Ross House Books, 1976), 194–195.))

Some claim that Christians should not be involved in arguments about the Christian faith or anything life. Support for this opinion cannot be made by appealing to the Bible. There are numerous accounts in the New Testament where such defenses—arguments—are made, even though there was a high price to pay for the confrontation. The apostles defended the faith and were beaten and imprisoned for their efforts (Acts 4). Stephen defended the faith, and his own countrymen stoned him to death (Acts 7). Paul offered his defense of Christianity before Greek philosophers (Acts 17:22–34), the Jews (Acts 22–23), and Roman civil officials (Acts 24–26). He was ready and eager to defend the faith before Caesar himself (Acts 25:11, 32). 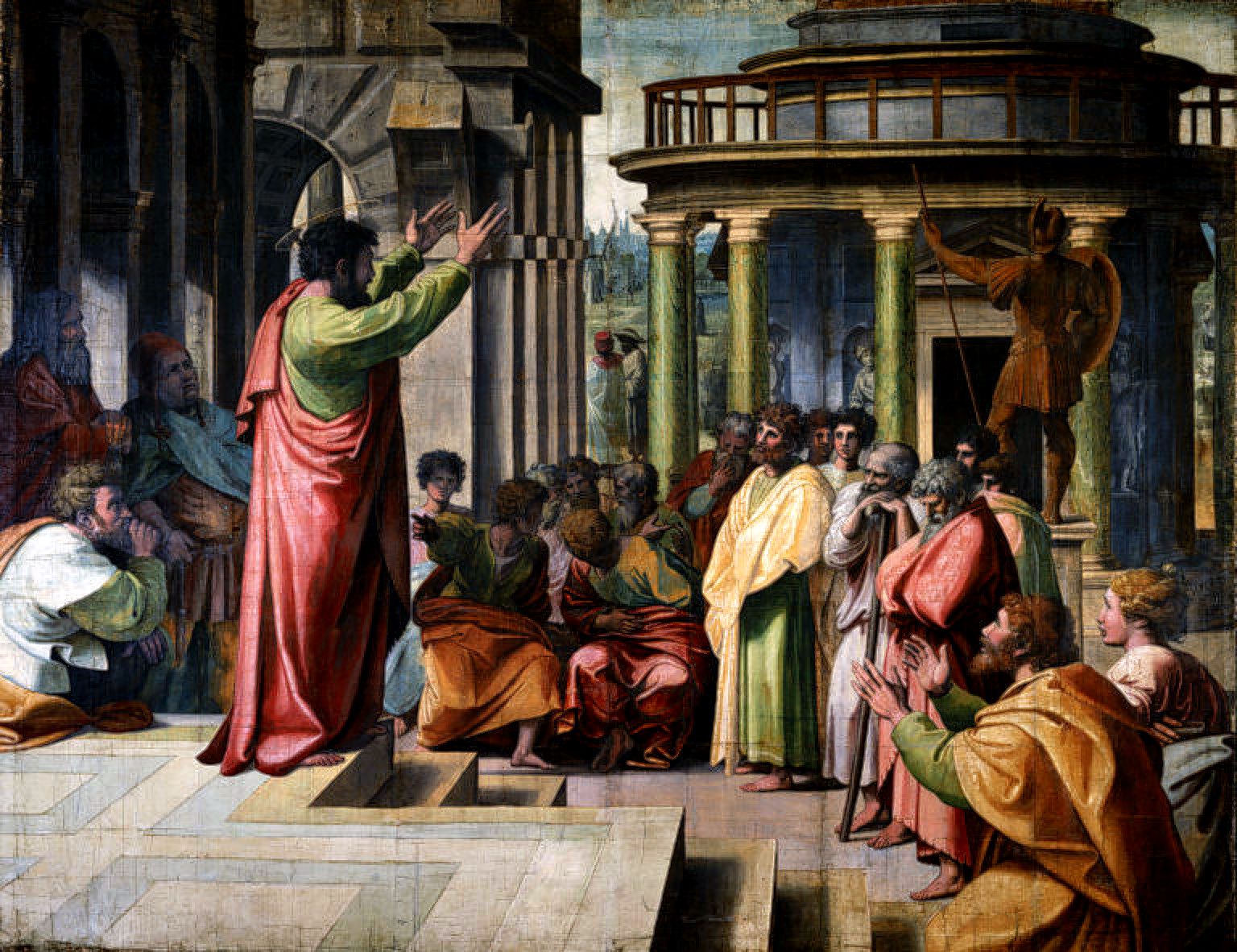 Paul on Mars Hill in Athens Among the Greek Philosophers by Raphael (1515).

Christian apologists give reasons as to why they believe what they know to be true. The audiences may vary—genuine seekers, skeptics, or hostile unbelievers—but the message and starting point are the same. The apologist’s job, like a lawyer before a judge and jury, is to present sound arguments that testify to the truth.

But on what does the apologist stand to make his case? He cannot use himself as the standard or even the expert opinion of others. Furthermore, the Christian apologist must recognize that his opponent is not the final arbiter of truth. We should never entertain the thought that our philosophical foes are the judge and jury in determining whether God is just and His Word is true. Our task is not to present the Christian faith as a debatable hypothesis, a study in probability, or just one religious option among many. We should never say, “You be the judge.”

In a biblical defense of the Christian faith, God is not the one on trial. How can a finite, fallible, and fallen being ever be a competent judge of eternal things? How is it possible that the creature can legitimately question the Creator? God asks Job: “Will the faultfinder contend with the Almighty? Let him who reproves God answer it” (Job 40:1). Job responded, knowing the limitations of his own nature, the only way he could: “Behold, I am insignificant; what can I reply to Thee? I lay my hand on my mouth” (40:4). God asks Job a series of questions that demonstrate how limited he is in knowledge and experience. “Where were you when I laid the foundation of the earth!,” God inquires. “Tell Me, if you have understanding” (38:4). Job was trying to figure out the world and the way it works based on his own limited frame of reference. This is an impossible task.

There is No Neutrality

The Christian apologist is not given the option to adopt a neutral position when defending the faith. Neutrality assumes that man and God are on an equal footing. Christians are commanded not to “answer a fool according to his folly.” Why? We’ll be “like him” in his misguided assumptions and be classified a fool (Prov. 26:4). The Bible assumes that worldviews based on premises that are contrary to the Bible are foolishness. This is why Scripture states emphatically, without apology, that the professed atheist is a “fool” (Psalm 14:1; 53:1).

How can an insignificant creature who is smaller than an atom when compared to the vastness of the universe be so dogmatic? There’s not much maneuvering room here. If we abandon the governing assumptions of the Christian worldview from the start and argue from a supposed neutral starting point, we place ourselves in the same category as the atheist, all in the name of “defending the Christian faith”! This means that the starting point in the Christian worldview is not subjective; it’s not just one legitimate opinion among many.

Of course, the unbeliever doesn’t like to hear this. It means that he is not in control. It’s no wonder that Paul explains the reality of unbelieving thought in stark and uncompromising terms:

For the word of the cross is to those who are perishing foolishness, but to us who are being saved it is the power of God. For it is written, “I will destroy the wisdom of the wise, and the cleverness of the clever I will set aside.” Where is the wise man? Where is the scribe? Where is the debater of this age? Has not God made foolish the wisdom of the world? For since in the wisdom of God the world through its wisdom did not come to know God, God was well-pleased through the foolishness of the message preached to save those who believe. For indeed Jews ask for signs, and Greeks search for wisdom; but we preach Christ crucified, to Jews a stumbling block, and to Greeks foolishness, but to those who are the called, both Jews and Greeks, Christ the power of God and the wisdom of God. Because the foolishness of God is wiser than men, and the weakness of God is stronger than men (1 Cor. 1:18–25).

An apologetic methodology that claims a Christian should be “open,” “objective,” and “tolerant” of all opinions when he defends the faith is like a person who hopes to stop a man from committing suicide by taking the hundred-story plunge with him, hoping to convince the lost soul on the way down. No one in his right mind would make such a concession to foolishness. But Christians do it all the time when they adopt the operating presuppositions of unbelieving thought as if they were neutral assumptions about reality.

While the Bible maintains that the Christian apologist is prohibited from adopting the starting point of unbelieving thought, he is encouraged to show the unbeliever the end result of his foolish philosophical principles if they are consistently followed. As defenders of the only true faith, we are to “answer a fool as his folly deserves, lest he be wise in his own eyes” (Prov. 26:5). That is, we are to put the unbeliever’s worldview to the test, showing how absurd it is when followed consistently. A world without God and moral absolutes leads to despair, moral anarchy, and insanity: “This is an evil in all that is done under the sun, that there is one fate for all men. Furthermore, the hearts of the sons of men are full of evil and insanity is in their hearts throughout their lives. Afterwards they go to the dead” (Ecclesiastes 9:3).