The following is from the Introduction to my new book Restoring the Foundation of Civilization: God’s Government or Chaos that should be available in late August or early September of 2020. 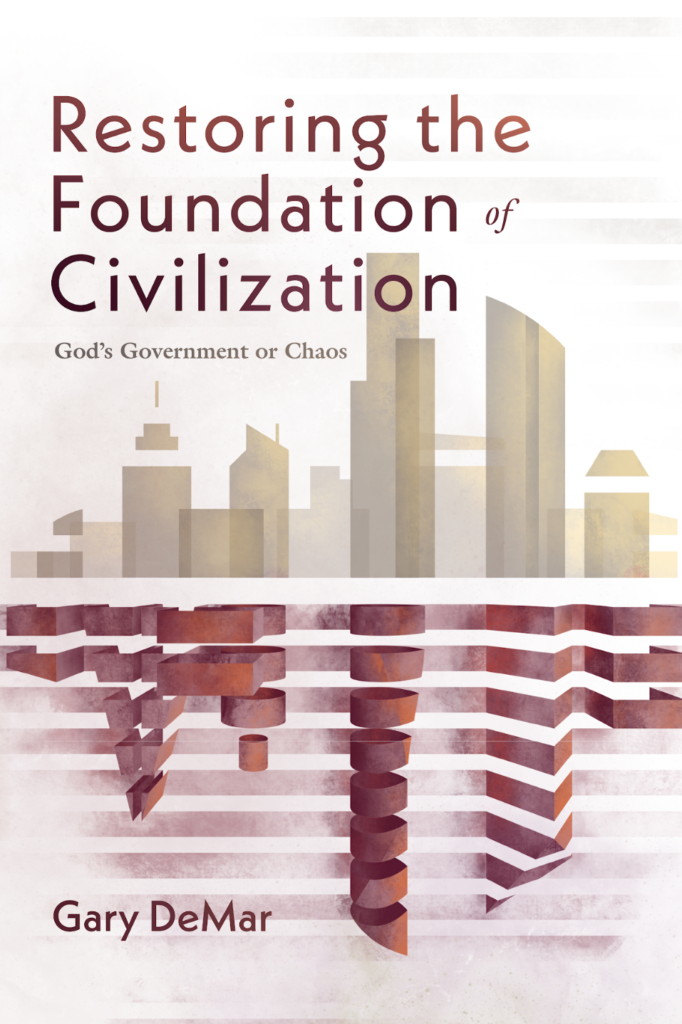 There are many Christians who will not participate in politics because they believe (or have been taught to believe) that politics is outside the realm of what constitutes a Christian worldview. “Politics is dirty,” “Jesus didn’t get mixed up in politics,” “Politics is about law, and Christianity is about grace,” “Government is not our savior; Jesus is,” “Jesus said that His kingdom is not of this world,” “The Christian’s only task is to preach the gospel.” ((See my book Myths, Lies, and Half-Truths (Powder Springs, GA: American Vision Press, 2010).))

The thing of it is, a biblical worldview includes politics, the civil dimension of biblical government. The British poet and literary critic T. S. Eliot (1888–1965) makes the point better than I can:

Yet there is an aspect in which we can see a religion as the whole way of life of a people, from birth to the grave, from morning to night and even in sleep, and that way of life is also its culture…. It is in Christianity that our arts have developed; it is in Christianity that the laws of Europe have—until recently—been rooted. It is against a background of Christianity that all our thought has significance. An individual European may not believe that the Christian Faith is true, and yet what he says, and makes, and does, will all spring out of his heritage of Christian culture and depend upon that culture for its meaning…. If Christianity goes, the whole of our culture goes. ((T.S. Eliot, Notes Towards the Definition of Culture (New York: Harcourt, Brace and Company, 1949), 29, 126.))

The entire Bible speaks about the subjects of governments and politics just like it speaks about everything else. Abraham Kuyper (1837–1920), Prime Minister of the Netherlands and Professor of Theology at the Free University of Amsterdam and editor of the daily newspaper The Standard, summarized this truth with these words: “[N]o single piece of our mental world is to be hermetically sealed off from the rest, and there is not a square inch in the whole domain of our human existence over which Christ, who is Sovereign over all, does not cry: “Mine!’” ((Abraham Kuyper, “Sphere Sovereignty” (1880) in James D. Bratt, ed., Abraham Kuyper: A Centennial Reader (Grand Rapids: Eerdmans, 1998), 488.))

If holiness means “Thou Shalt not steal” for you and me, then it also means the same thing for you and me if we decide to become a civil official. Politics, actually “civil government,” is not morally neutral territory just like self-, family, and church governments are not morally neutral. If we follow the reasoning of some Christians, we can’t speak out against a civil minister when he violates his oath to uphold the Constitution and violates some biblical law, for example, the specific law against man-stealing. Would we remain silent and passive with a husband who violates his marriage oath or a minister of the gospel who violates his ordination vows? Of course, we would not. There are procedures to deal with these violations. The same is true in the civil realm. It includes organizing people to oppose civil oath violators to remove them from office.

So, if thieves break into your home and burn it down, what should you do? What if they beat and rape your wife and steal all your stuff? If the chief of police and the mayor don’t do anything about it, are these non-involved Christians telling their fellow-Christians that they should not protest but just take the persecution “for righteousness’ sake”? Would he be considered “proud,” “pompous” and a “power monger” to rally his neighbors to vote the mayor out of office in the next election? According to God’s Word, the civil magistrate has the power of the sword (Rom. 13:1–4). Without limits on the civil minister’s authority and power, that sword can do a lot of harm to a lot of people.

I suppose as Christians like Corrie ten Boom (1893–1983) and her family were being dragged off to a concentration camp for helping Jews escape from the Nazis, their fellow-Christians should have told them, “This is what you get for not being willing to be oppressed and disenfranchised for righteousness’ sake. You should have made peace with the Nazis not protest against them. Persecution is the Christian’s lot in life.”

If Christians had been involved in civil government decades before and understood its limitations and their responsibility to speak out against oppression, Germany would never have had an Adolf Hitler. In 19th-century Germany, a distinction was made between the realm of public policy managed by the State and the domain of private morality under the province of the gospel. Religion was the sphere of the inner personal life, while things public came under the jurisdiction of the “worldly powers.” Redemption was fully the province of the church while the civil sphere was solely the province of the State. “Religion was a private matter that concerned itself with the personal and moral development of the individual. The external order—nature, scientific knowledge, statecraft—operated on the basis of its own internal logic and discernable laws.” ((Richard V. Pierard, “Why Did Protestants Welcome Hitler?,” Fides et Historia, X:2 (North Newton, KS: The Conference on Faith and History), (Spring 1978), 13.))

Christians were told that the church’s sole concern was the spiritual life of the believer. “The Erlangen church historian Hermann Jorda declared in 1917 that the state, the natural order of God, followed its own autonomous laws while the kingdom of God was concerned with the soul and operated separately on the basis of the morality of the gospel.” ((Pierard, “Why Did Protestants Welcome Hitler?,” 14.)) Sound familiar? It’s what many Christians believe and practice.