It began with Confederate monuments, now it’s any historical figure who was not perfect, including our nation’s founders who, although not perfect like all of us, created a system of government to fix the imperfect. The latest attack is on Mount Rushmore. Some want it blown to pieces and others want it dismantled piece by piece.

Where were all the protests in 2008 when then presidential candidate Barack Obama visited Rushmore?

In 2008, CNN anchor Ron Marciano said: “Barack Obama is campaigning in South Dakota. That state’s primary is Tuesday. Obama arrived there late last night and got a good look around Mt. Rushmore — it’s quite a sight if you haven’t seen it.”

Fellow anchor Betty Nguyen added: “Barack Obama is in South Dakota today. He arrived there last night. Take a look at this. He got a good glimpse of the majestic Mount Rushmore. Well, South Dakota and Montana have closed out the primary season on Tuesday.” (Breitbart)

In 2016, Bernie Sanders said the following about Mount Rushmore during his visit: “This is our country at its very best. What an incredible achievement.”

Slavery was and is a moral evil. If the Bible had been followed, there never would have been slavery since the Bible condemns “man stealing”: “He who kidnaps a man, whether he sells him or he is found in his possession, shall surely be put to death” (Exodus 21:16). While I have not done a thorough study of why so many otherwise orthodox Christians defended chattel slavery, one wonders if they, like the Roman Catholic Church during the time of Galileo, were reading the Bible through the lens of Aristotle. Aristotle believed in the reasonableness and “natural order” for the institution of slavery because there are some people who are “slaves by nature,” a phrase found in his Politics. Aristotle’s views, as a champion of reason, made their way to the early years of discovery:

Of all the ideas churned up during the early tumultuous years of American history, none had a more dramatic application than the attempts made to apply to the natives there the Aristotelian doctrine of natural slavery: that one part of mankind is set aside by nature to be slaves in the service of masters born for a life of virtue free of manual labour. ((Lewis Hanke, Aristotle and the American Indians (London: Hollis & Carter, 1959), 12–13.))

There were attempts by our nation’s founders to legislate slavery out of existence. The Constitution does not sanction slavery. The three-fifths clause is often used to claim that slaves were only three-fifths of a person. That’s not at all what is meant by the phrase.

What the imperfect framers did was to create a governmental system where the institution could be eradicated either legislatively or constitutionally by the Amendment process. Unfortunately, it took a civil war to end slavery, a war that left around 750,000 Americans dead as well as an increase in the power and authority of the national government.

Mount Rushmore is a testimony to the fact that our system of government does work. Can it do better? Yes, it can, but not by Marxist tactics where no one has rights and human life is expendable for an unachievable goal.

Gutzon Borglum was the artistic genius and drive behind the Mount Rushmore sculpture in the Black Hills of South Dakota. Yes, he had his problems like all of us have, but we have to remember that if every person’s beliefs and foibles were assessed and their accomplishments erased from history, some of the greatest achievements that made our world would disappear.

The goal is to learn from the past, not erase it.

Artist and sculptor Gutzon Borglum said the monument would cost $500,000 and take three years to carve. But thanks to the Depression, World War II and some bad rock, the project would take 14 years —from 1927 to 1941 — and cost over $1 million. Back in 1941, that was the equivalent over $17 million today.

It’s awe-inspiring to think that 400 people could accomplish such a titanic feat using dynamite to remove about 450,000 tons of rock.

In addition to the heads of past Presidents, Gutzon wanted to include an entablature to be placed alongside the four presidents. It would have been inscribed with a brief history of the United States. Without it the monument would have about as much meaning to future generations as the heads on Easter Island have for us today. “You might as well drop a letter in the postal system without an address or signature,” Borglum wrote, “as to send that carved mountain in to the future without identification.”

Borglum wanted Calvin Coolidge to write the 500-word history. After the president submitted his draft, Borglum made so many editorial changes that Coolidge withdrew his support for the project. In time, interest in the project waned. In 1934, a year after Coolidge’s death, the project was revived with the entry of William Randolph Hearst and his newspaper chain and an essay contest. The contest was sponsored by Hearst where the five million readers of his newspapers had a chance to write the historical inscription and have their words immortalized in stone on Mount Rushmore.

President Franklin Roosevelt accepted Borglum’s invitation to head a judging committee that included Eleanor Roosevelt, Interior Secretary Harold Ickes, and other notable Americans. The contest was extremely popular. More than 100,000 entries were submitted. Like the monument itself, the Great Depression and the advent of World War II put a halt to the project.

The submission by a young Nebraskan named William Andrew Burkett won the college-age category. Burkett’s entry won him a four-year college scholarship. He claimed he owed his good fortune to winning the contest.

In an early photograph of the initial work of the project, you can see the date “1776” which was to have been the start of the 500-word inscription. It was later blasted away to make room for the head of Abraham Lincoln. 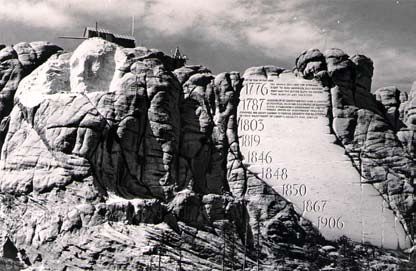 A depiction of what the Entablature would look like when completed

Eventually, Burkett’s essay was inscribed on a bronze tablet and installed at Rushmore in 1975. It reads as follows:

Almighty God, from this pulpit of stone the American people render thanksgiving and praise for the new era of civilization brought forth upon this continent. Centuries of tyrannical oppression sent to these shores, God-fearing men to seek in freedom the guidance of the benevolent hand in the progress toward wisdom, goodness toward men, and piety toward God.

Consequently, on July 4, 1776, our forefathers promulgated a principle never before successfully asserted, that life, liberty, equality, and pursuit of happiness were the birthrights of all mankind. In this declaration of independence beat a heart for all humanity. It declared this country free from British rule and announced the inalienable sovereignty of the people. Freedom’s soldiers victoriously consecrated this land with their life’s blood to be free forever more.

Then, in 1787, for the first time a government was formed that derived its just powers from the consent of the governed. General Washington and representatives from the 13 states formed this sacred Constitution, which embodies our faith in God and in mankind by giving equal participation in government to all citizens, distributing that powers of governing, threefold securing freedom of speech and of the press, establishing the right to worship the Infinite according to conscience, and assuring this nation’s general welfare against an embattled world. This chart of national guidance has for more than 150 years weathered the ravages of time. Its supreme trial came under the pressure of civil war, 1861–65. The deadly doctrines of secession and slavery were then purged away in blood. The seal of the Union’s finality set by President Lincoln, was accomplished like all our triumphs of law and humanity, through the wisdom and the power of an honest, Christian heart. Far-sighted American statesmanship acquired by treaties, vast wilderness territories, where progressive, adventurous Americans spread civilization and Christianity.

In 1803, Louisiana was purchased from France. This acquisition extended from the Mississippi river, across the fertile prairie to the Rocky Mountains, and paved the way for America’s pre-eminence among the nations.

In 1819, the picturesque Florida peninsula was ceded as payment of Spanish obligations due to Americans.

In 1845, Texas, having patterned American democracy during the 10 years of freedom from Mexican rule, accepted the invitation to join the sisterhood of states. In 1846, the Oregon country was peacefully apportioned by the 49th parallel as the compromised international boundary of the two English-speaking nations.

In 1848, California and territory likewise rich in natural resources was acquired as the consequence of an inevitable conflict with Mexico. In spirit of mutual concession, the United States granted additional indemnities for the adjustment of the international boundary, extending form the Rio Grande to the Gulf of California.

In 1867, Alaska was purchased from Russia.

In 1904, the Panama Canal Zone was acquired for our people to build a navigable highway enabling the world’s people to share the fruits of the earth and of human industry.

Now, these eras are welded into a nation possessing unity, liberty, power, integrity, and faith in God, with responsible development of character and devoted to the performance of humanitarian duty. Holding no fear of the economic and political, chaotic clouds hovering over the earth, the consecrated Americans dedicate this nation before God, to exalt righteousness and to maintain mankind’s constituted liberties so long as the earth shall endure.