First it was the removal of Confederate statues and monuments. Next, it was Christopher Columbus. Then it was George Washington, Thomas Jefferson, Andrew Jackson, and even Abraham Lincoln. More are to come, and they will never be finished. The next target? John Nolte says Mount Rushmore may not survive.

All pictures of white Jesus because Shaun King says Jesus was not white, thus, a white-looking Jesus is a symbol of racial injustice:

They are a form of white supremacy.
Always have been.
In the Bible, when the family of Jesus wanted to hide, and blend in, guess where they went?
EGYPT!
Not Denmark.
Tear them down.

Denmark? Now, that would have been a trip for the ages. Israel had many of what we know today as Europeans living there. Israel was occupied by the Romans. You can’t get more European than that. As Jews, Joseph and Mary could more easily “blend in” among their own people who spoke the same language than they could in Egypt. They escaped to Egypt because of the age of their child and the threat of Herod and because of a very specific prophecy (Hosea 11:1; Matt. 2:15).

Jesus being Jewish, likely had very light brown skin. Jesus wasn’t white, but he wasn’t black. This may surprise a lot of people, but Jews are Caucasian. Today, “white” is a cultural construct that’s used as a weapon.

Do you think they will stop with pictures of white Jesus? The Bible will be next because it was used to support slavery and teaches that homosexuality is a sin. The desecration of churches will follow the cancel culture revolution. Remember the church in Washington, DC, that was set ablaze. Well, they are back trying to finish what they started by defacing the columns of the church with “B-H-A-Z,” for “Black House Autonomous Zone.” 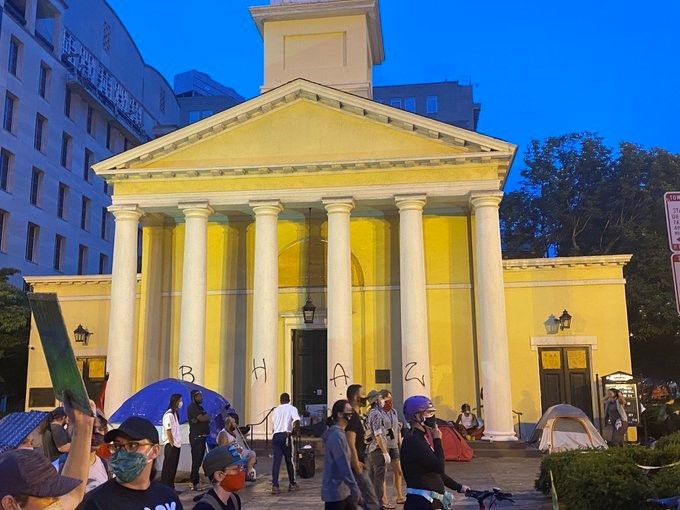 The French Revolution, the Russian Revolution, and China’s Cultural Revolution come to mind. The tactics are similar and the ultimate goal is to rid the world of any authority where there is a God with laws, or should I say, to get rid of one God and His laws so a new god and its laws can be erected and worshipped.

Once it’s determined that every man, woman, and child can do what is right in their own eyes (Judges 17:6), there is no end to what’s left of the old order to be destroyed. Once they sow the wind, they will reap the whirlwind (Hosea 8:7).

On a side note, the Bible does not cancel its history. The books are open for everyone to see. Nothing is hidden. There is David’s adultery and his duplicity in the death of Urriah the Hittite to hide his sin, and yet his psalms grace a large part of the Bible. There are few Bible personalities who come away unscathed.

If cancel culture were applied to the Bible, there would be little to read. Look at the list of people from the Old Testament as examples of faith in Hebrews 11. Most of the them would be cancelled given today’s standards, many of whom grace stained glass windows in churches.

There is no space here to outline the failure of the Church to work toward a Christian Civilization and a Christ-like culture. In fact, there a millions of Christians who have been led astray into believing that such a goal should even be attempted. Consider:

You can never Christianise society. It is folly to attempt to do so. I would even suggest that it is heresy to do so. Man must be born again. How can they live the Christian life if they have not become Christians? Good fruit can only come from a good tree, a good root; and the idea that you can impose a Christian life or culture upon non-Christian people is a contradiction of Christian teaching.

When a fixed moral standard is eradicated, all is permissible for a larger goal, even an undefined one. Statues, churches, and Jesus aren’t the only things to go. It must all go for the promised greater good that never comes. For example, a Wells Fargo Bank was looted by rioters with sledgehammers:

To what end? It doesn’t matter. The world is adrift in relativism, placed on the vast ocean without a sail or rudder, going where the wind goes hoping for a soft landing on some paradise island. Think Mutiny on the Bounty.

What we are seeing today was spawned centuries ago. Christianity was shoved to the sidelines when the Enlightenment claimed “that no authority could sit in judgment on human reason, that man’s reason and experience were the measure of all things.” ((P. Andrew Sandlin, Christian Culture: An Introduction (Mount Hermon, CA: Center for Cultural Leadership, 2013), 23.)) This sterile worldview was not satisfying, so like all failing worldviews, a new paradigm was reared to offer meaning for those seeing purpose. Andrew Sandlin offers a brief summary of Romanticism, the then new ideological savior from the sterility of the Enlightenment:

This rationalism [of the Enlightenment] produced a cold, sterile world, and in the late 18th and early 19th centuries, Romanticism emerged as a reaction. Romanticism didn’t like the idea of universal or shared reason and experience. It wanted to champion what was unique about every individual, not what humanity had in common. Romanticism is the first wholesale movement of individualism in world history. The really important thing was individual thinking, feelings, emotions, desires, and interpretations, not what all humans shared. Historians call this “the inward turn”; it’s a turning point in Western history. Objective truth outside us is no longer important, whether that truth is God or the Bible or the church or creeds or shared human reason or experience.

The struggle for meaning would come to an end in 1859 with the publication of Charles Darwin’s On the Origin of Species by Means of Natural Selection, or the Preservation of Favoured Races in the Struggle for Life. Now there’s something to topple since it is the engine of so much misery in the 20th century, the same misery that we will see again if the cancel culture crowd gets its way.

This is a great opportunity for the Church of Jesus Christ. But one wonders if enough Christians have the wisdom to offer a comprehensive alternative. There’s a great deal of work to be done.