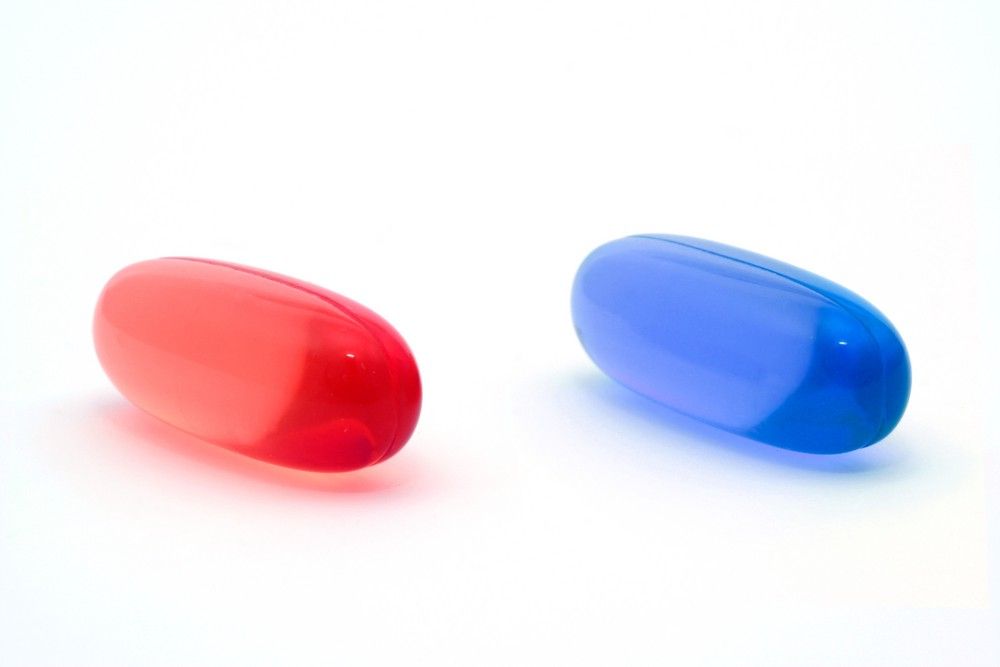 I started watching the opening few scenes of The Matrix to get to the blue pill/red pill scene. The truth is difficult to accept when you’ve believed something for so long and it turns out not to be real.

How many of us would have taken the red pill when the world around us seems mostly normal and not too bad? It looks like an easy choice in a film knowing that Neo (new) was most likely making the right choice with the red pill. Taking the red pill reveals an unpleasant truth while taking the “blue pill” sedates you enough to keep you in blissful ignorance. Sedation and ignorance work for a time until the barbarians are at the gates.

Concluding that a radical change in perspective is not an easy choice to make since, like Neo, we don’t know what that choice might bring. Ideas and choices (including the lack of them) have consequences.

Today, the United States finds herself in the midst of making a choice. It’s true that our coins have “In God We Trust” stamped on them. But it’s probably equally true that our nation puts more trust in the money where the acknowledgment appears than in the God who supplies all wealth. Have we come to the place where we now believe that “My power and the strength of my hand made me this wealth” (Deut. 8:17)? God’s assessment of such presumption is not easy for an unrepentant nation to take:

But you shall remember the LORD your God, for it is He who is giving you power to make wealth, that He may confirm His covenant which He swore to your fathers, as it is this day. And it shall come about if you ever forget the LORD your God, and go after other gods and serve them and worship them, I testify against you today that you shall surely perish. Like the nations that the LORD makes to perish before you, so you shall perish; because you would not listen to the voice of the LORD your God (Deut. 8:18–20).

Herod saw himself as a god. But what is even more frightening, is that the people accepted him as a god (Acts 12:20–24). It is no less true today that people reject the God of the Bible and His faithful provisions of life, liberty, and property and turn to the State for sustenance and security. Where we are told to pray, “Our Father who art in heaven…. Give us this day our daily bread” (Matt. 6:9, 11), we too often turn to the State for our daily bread.

Where the Bible tells us that God is our Father, more often than not the people make the State their father, because the State supposedly can provide us all the financial aid we need. Of course, in order to accomplish this miracle, the State must confiscate capital from the most productive members of society or create money out of thin air. Both actions are immoral, tyrannical, and self-defeating.

Eventually the productive lose incentive to work when they know that whatever wealth they accumulate will be taken from them. Infusing the economy with money that has no backing only lessens its value for everyone.

The biblical covenant structure is as follows: (1) the absolute sovereignty of a transcendent God who is always present (immanent) with His people. (2) He sets up a hierarchy of earthly representatives, (3) lays down the law for all of life, (4) judges our actions with either blessings or curses, and (5) preserves His kingdom against all opposition. When a ruler decrees either by words or deeds that he is independent of God’s government, or that justice is defined according to his self-made laws, or that man looks to the State for salvation, then God responds with judgment.

A nation might not see God’s judgment in the same way Herod did, but time brings all things to light. Choosing man as the sovereign ruler, independent of God, will lead a nation to slavery and eventual destruction.

You may be saying that Christians believe all of this. They believe it conceptually but not applicationally. Many (most?) Christians believe we live in a two-kingdom world, much like the Matrix. The pagan world runs in terms of natural, neutral-based laws, while the church operates with moral norms that only apply to the church. Christians are interlopers waiting for their ticket to paradise when hard times come via a rapture or some other end-time event.

Too many believe that Christians live in an ethereal upper-story realm while non-Christian world lives in a lower-story realm . Each realm is said to operate in terms of two distinct sets of standards.

The idea of a Christian civilization is impossible and even heretical to consider. This is a new way of thinking that has had disastrous results.

By the term, “The Christian World Order,” I take it that what is meant is a world order that in all its aspects and spheres is Christian, an order so conformed to the principles of Christianity and so pervaded by the forces that are operative in Christianity that the whole of life will be brought into willing captivity to the obedience of Christ.

Are we justified in entertaining the conception of Christian world order? Or, at least, are we justified in entertaining such an order as an ideal towards which we should work and strive? Do we have any assurance that such a world order is attainable? And, if we have no assurance that it is attainable, are we not mocking ourselves and others by framing the conception and, particularly, by working' towards the achievement of it? Should we not rather descend from the clouds and deal with more practical and sensible matters?

A Christian world order, if the word “Christian” is applied with consistency, means an order in which the principle of redemption and restoration is brought to its complete and all-pervasive expression and fruition. ((John Murray, “The Christian World Order,” The Presbyterian Guardian (October 10, 1943). It’s also found in volume 1 of Collected Writings of John Murray: The Claims of Truth (Carlisle, PA: The Banner of Truth Trust, 1976), 356-366).))

It’s long past time to take the red pill.