Most people who have seen the film The Ten Commandments on television have never seen Cecil B. DeMille’s opening introduction. DeMille had something more in mind than just making a film about a religious figure from the Bible. He considered his production to be so important that he came out on stage to deliver a short but powerful statement on the nature of freedom under the law of God:

The theme of this picture is whether men ought to be ruled by God’s laws or whether they are to be ruled by the whims of a dictator like Rameses. Are men the property of the State or are they free souls under God? This same battle continues throughout the world today.

The film’s elaborate souvenir book that was made available in theaters includes a preface with the title “The Law by Which Men Live”:

THE TEN COMMANDMENTS are not laws. They are THE LAW. Man has made 32,000,000 laws since they were handed down to Moses on Mount Sinai more than three thousand years ago, but he has never improved on God’s law. ((The Ten Commandments Souvenir Book, Paramount Pictures Corporation (1956, 1957), was published by The Greenstone Company, New York, N.Y.))

Law is an inescapable concept.

There are so many laws — new and old — that each of us probably breaks a few every day. “No one knows how many laws there are in the United States.  Apparently, no one can count that high…. When federal laws were first codified in 1927, they fit into a single volume.  By the 1980s, there were 50 volumes of more than 23,000 pages. …  The Internal Revenue Code alone … contains more than 3.4 million words and, if printed 60 lines to the page, is more than 7,500 pages long.  There are about 20,000 laws just governing the use and ownership of guns.” (Kowal.com) 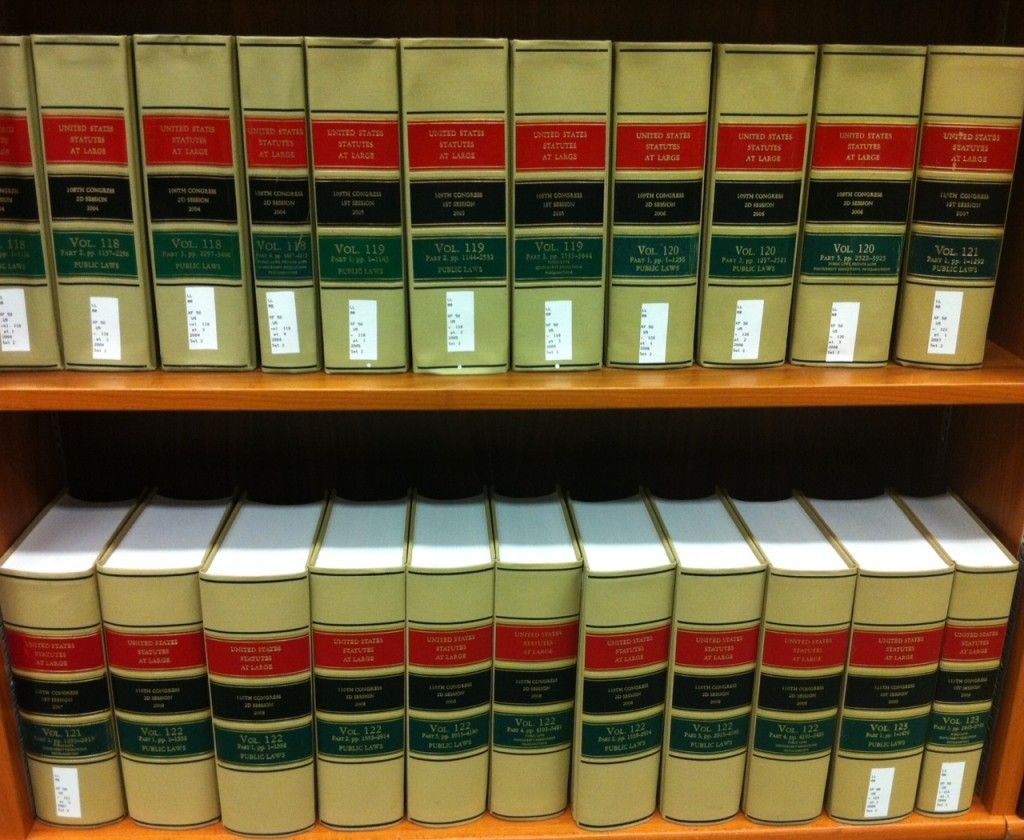 Law Library of Congress Reading Room Copy of the U.S. Statutes at Large

The Ten Commandments, a summary statement of a broader body of revealed laws, have been a fixed summary standard in America since before its official founding. Nightline host Ted Koppel stated the following in a 1987 commencement address at Duke University:

What Moses brought down from Mt. Sinai were not the Ten Suggestions. They are commandments. Are, not were. The sheer brilliance of the Ten Commandments is that they codify in a handful of words acceptable human behavior, not just for then or now, but for all time. Language evolves. Power shifts from one nation to another. Messages are transmitted with the speed of light. Man erases one frontier after another. And yet we and our behavior and the commandments governing that behavior remain the same. ((Ted Koppel, The Last Word, Commencement Address at Duke University, Durham, North Carolina (May 10, 1987). Quoted in Robert H. Bork, The Tempting of America: The Political Seduction of the Law (New York: The Free Press, 1989), 164.))

Now if we can only become a nation that believes all of this.

The following is a brief summary of the Ten Commandments related to their limiting nature regarding the civil magistrate.

The First Commandment states that there is only one God, and only He can save us. The State believes it is god and only it can save. Empowering the State has always been the goal of tyrants.

The Second Commandment forbids idolatry. The State has become an idol and is worshiped as a god when the Bible declares that the civil magistrate is designed to be a “minister,” a servant, of God to us for good (Rom. 13:4). The State continues to grow with the promise of political salvation and mandating its own definition of what good means.

The Third Commandment forbids taking God’s name in vain. Politicians appeal to God all the time and yet violate His commandments in the same breath. President Obama made reference to God – even singing “Amazing Grace” – in his eulogy for Rev. Pinckney and soon after celebrated the Supreme Court’s ruling making same-sex marriage the law of the land. This is taking God’s name in vain.

The Fourth Commandment sets one day a week aside for rest. The interesting thing about this commandment is that it’s written into the Constitution at Article I, Section 7, Clause 2.

If any Bill shall not be returned by the President within ten Days (Sunday excepted) after it shall have been presented to him, the Same shall be a Law, in like Manner as if he had signed it, unless the Congress by their Adjournment prevent its Return, in which Case it shall not be a Law.

The State does not own our time. The French changed the calendar from the seven-day creation week to a ten-day week.

The Fifth Commandment defines the family. As we’ve seen the courts have redefined the family, and by redefining the family they can now rewrite all law in terms of that new definition. In addition, the State has become our new parents. “Honor the State as your real father and mother, that your days may be prolonged in the land which the State lets you live on.” Herbert Schlossberg develops this point in his book Idols for Destruction:

The paternal state not only feeds its children, but nurtures, educates, comforts, and disciplines them, providing all they need for their security. This appears to be a mildly insulting way to treat adults, but it is really a great crime because it transforms the state from being a gift of God, given to protect us against violence, into an idol. It supplies us with all blessings, and we look to it for all our needs. Once we sink to that level, as [C.S.] Lewis says, there is no point in telling state officials to mind their own business. “Our whole lives are their business” [God in the Dock, p. 134]. The paternalism of the state is that of the bad parent who wants his children dependent on him forever. That is an evil impulse. The good parent prepares his children for independence, trains them to make responsible decisions, knows that he harms them by not helping them to break loose. The paternal state thrives on dependency. When the dependents free themselves, it loses power. It is, therefore, parasitic on the very persons whom it turns into parasites. Thus, the state and its dependents march symbiotically to destruction.

The Sixth Commandment was legislated out of existence decades ago by the sanctioning of perpetual war and the legalization of abortion.

The Seventh Commandment in its prohibition of adultery is a summary statement about all marital relationships. The law prohibiting adultery rests on the creation mandate of marriage being between one man and one woman (Gen. 1:27-28; 2:20-25). The complement of man and woman is what’s “suitable” (biologically and spiritually), not a man and man or a man and a woman. Jesus confirmed the creation marriage mandate (Matt. 19:1-6).

The Eighth Commandment prohibits stealing. Our nation’s outrageous taxing system is based on theft when people are given the right to vote to take money from some people so it can be given to other people.

The Tenth Commandment indicts the modern State because it covets everything: life, liberty, power, property, authority, money, prestige, privilege, and our souls.

Written in the style of a law reference guide, Biblical Law is a layman's compendium of the Bible's applications to all manners of contemporary society. With an introduction by Gary DeMar, Clark's classic exposé finds itself in a prime position to educate a whole new generation of Christians. Political law, civil law, economics, and more: With topics ranging from war and taxation to contracts and loans, from marriage and hospitality to welfare and husbandry, Clark's expositions are as practical as they are scriptural.