While the writer of the letter to the Hebrews says we should “have our senses trained” (5:14), the Bereans searched the Scriptures daily to assess whether what Paul was saying was true or not (Acts 17:11), and John says to “test the spirits, to see whether they are from God, because many false prophets have gone out into the world” (1 John 4:1), it seems that today’s Christians are easily led astray by every wind of doctrine (Eph. 4:14), especially when it comes to Bible prophecy.

It appears that no one is immune. Consider John Piper whose book Coronavirus and Christ includes this chapter: “Awakening Us for the Second Coming.” The chapter begins with this true statement: “the history of the Christian church is littered with failed predictions of the end of the world.” He then writes the following, claiming the Coronavirus is a sign that Jesus’ return may be near

Jesus said there would be pointers to his coming—like wars, famines, and earthquakes (Matt. 24:7). He called these signs “birth pains” (Matt. 24:8). The image is of the earth as a woman in labor, trying to give birth to the new world, which Jesus would bring into being at his coming.

Paul picked up this imagery in Romans 8:22 and referred the birth pains to all the groanings of this age—all the miseries of disaster and disease (like the coronavirus). He pictured us in our diseases as part of the labor pains of the world.

Piper’s not alone. A majority of Christians and pastors believe we are living in the last days. Consider the following results of a recent survey:

LifeWay found that nearly nine out of 10 surveyed pastors viewed the end times prophecies of the Bible as being showcased in current events.

This included around 83 percent of respondents believing that Jesus was referring to current events when discussing the rise of false prophets and false teachings, traditional morals becoming less accepted (79 percent), wars and national conflicts (78 percent), earthquakes and other natural disasters (76 percent), and people leaving Christianity (75 percent).

The survey also found that 56 percent of surveyed pastors believed Jesus would return within their lifetime, versus 20 percent who did not believe it would happen in their lifetime.

Referencing Matthew 24:7–8 and contending that Jesus was referring to some distant end-time series of events is not an interpretive possibility because Jesus was answering questions asked by His disciples about the destruction of the temple and the end of the age (Matt. 24:1–3), that is, the end of the Adamic and Mosaic ages (αἰώνων_/aiōnōn_) (1 Cor. 10:11), not the end of the world (_kosmos_).

There were wars and rumors of wars in the lead up to the temple’s destruction in AD 70 as well as earthquakes, famines (Acts 11:27–28), and even plagues (Luke 21:11). The clincher is that Jesus said that the generation then alive would not end until all the events mentioned in the Olivet Discourse took place (Matt. 24:34). The birth pangs were related to that generation not 50 generations later.

The timing is the key to understanding the passage, otherwise a perpetual state of fear, disappointment, and inaction set in. Why bother with this world since Jesus is about to rescue us from all our troubles? All we must do is hold on a little while longer and all the bad stuff will go away, and we won’t have to do anything to fix what’s wrong. Our inaction becomes a self-fulfilling prophecy.

Jesus was warning His first readers that these common signs were not end-of-the-world signs because they are common to every generation. Consider the following from science and science fiction writer Michael Crichton of Jurassic Park fame:

Is this really the end of the world? Earthquakes, hurricanes, floods?

No, we simply live on an active planet. Earthquakes are continuous, a million and a half of them every year, or three every minute. A Richter 5 quake every six hours, a major quake every 3 weeks. A quake as destructive as the one in Pakistan every 8 months. It’s nothing new, it’s right on schedule.

At any moment there are 1,500 electrical storms on the planet. A tornado touches down every six hours. We have ninety hurricanes a year, or one every four days. Again, right on schedule. Violent, disruptive, chaotic activity is a constant feature of our globe.

Is this the end of the world? No: this is the world. It’s time we knew it. ((Michael Crichton, “Earthquakes: Fear and Complexity” (San Francisco, CA: The Independent Institute, November 15, 2005.)) 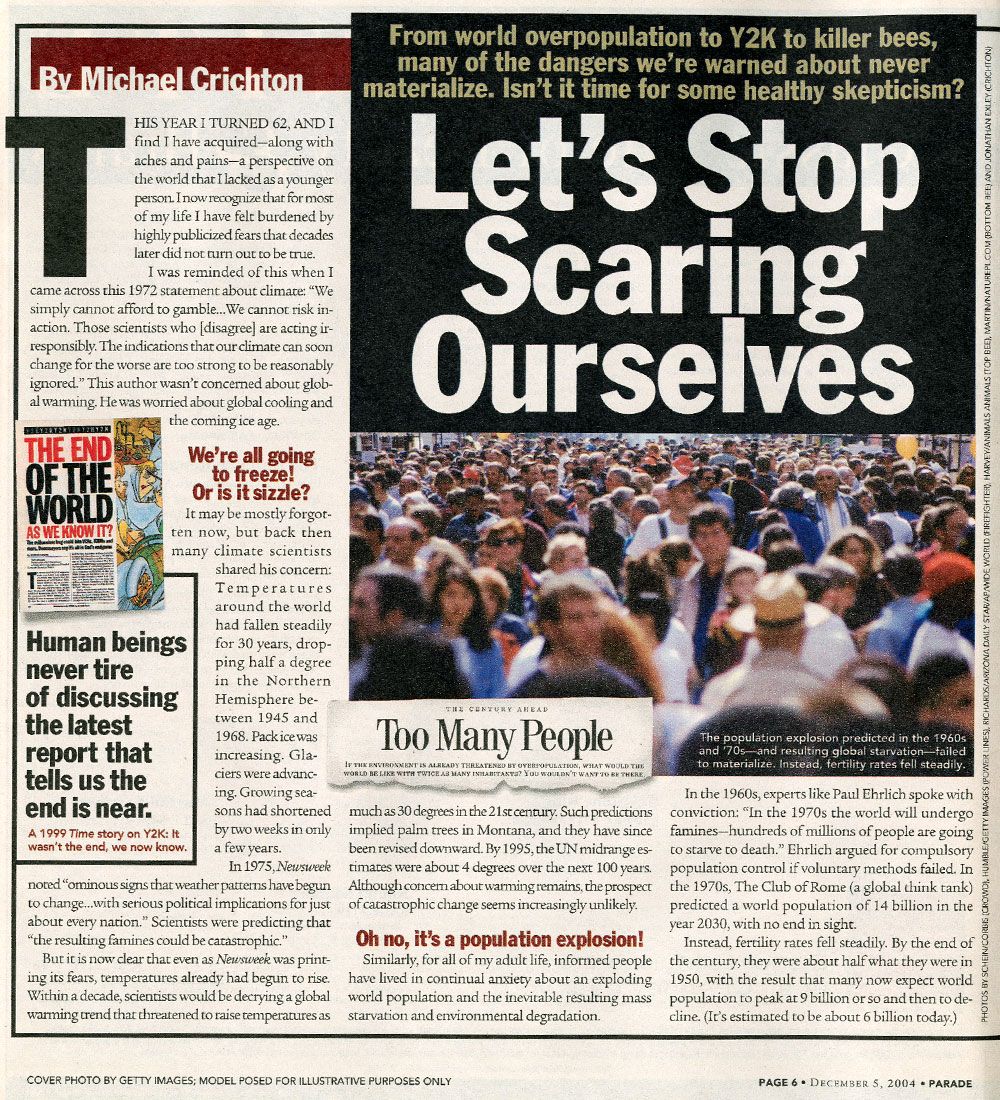 Charles Wesley Ewing, writing in 1983, paints a clear historical picture of how prophetic interpretation based on current events turns to confusion, uncertainty, and in some people unbelief when it comes to predicting an end that disappoints:

In 1934, Benito Mussolini sent his black-shirted Fascists down into defenseless Ethiopia and preachers all over the country got up in their pulpits and preached spellbinding sermons that had their congregations bulging at the eyes in astonishment about “Mussolini, the Anti-Christ,” and to prove their point they quoted from Daniel 11:43, which says, ‘And the Ethiopians shall be at his steps.’ Later, Benito, whimpering, was [shot and later] hung by his own countrymen, and preachers all over America had to toss their sermons into the scrap basket as unscriptural. ((Charles Wesley Ewing, “The Comedy of Errors,” The Kingdom Digest (July 1983), 45.)) 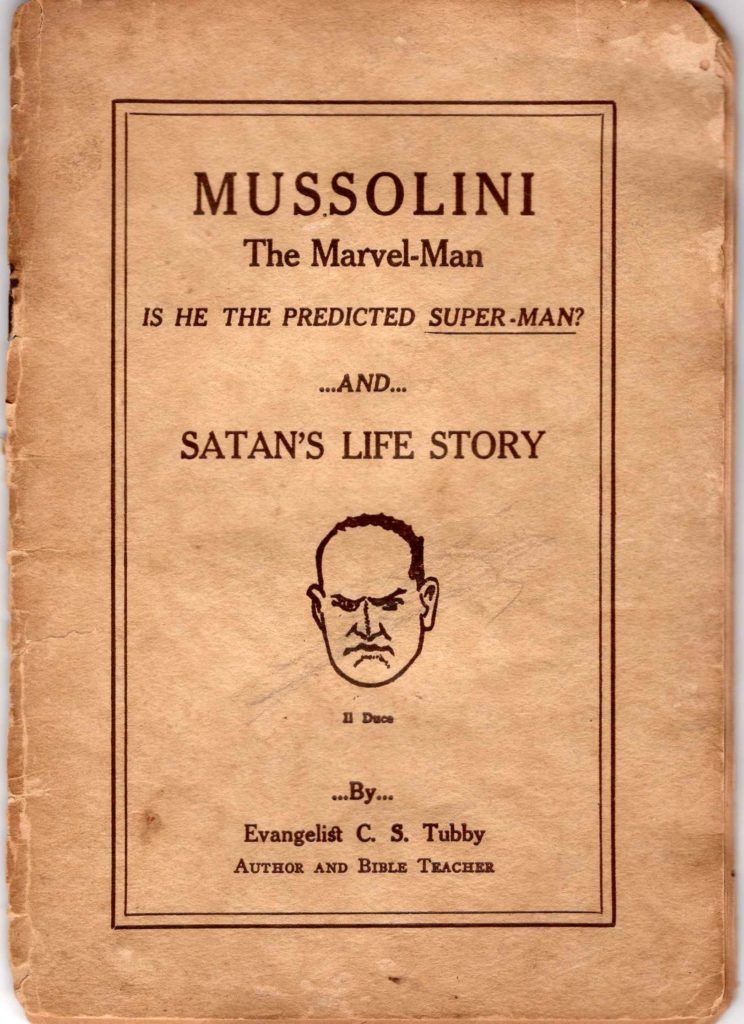 Ewing goes on to mention how Hitler’s storm troopers took Czechoslovakia, Poland, France, North Africa, and set up concentration camps where millions of Jews were killed in what has become the modern-day definition of “holocaust.” Once again, preachers ascended their pulpits and linked these events to Bible prophecy and assured the church-going public that Hitler was the antichrist and the rapture was just around the next bend. When the allies routed the Nazis and drove them out, sermons were once again tossed out or filed away to be revised at some future date hoping people’s memories would fade.

The next end-time-antichrist candidate was Joseph Stalin, the leader of godless Communism, a movement hell-bent on conquering the world. “But on March 5, 1953, Stalin had a brain hemorrhage and preachers all over America had to make another trip to the waste basket.” ((Ewing, “The Comedy of Errors,” 45–46.))

The Coronavirus is real and deadly for many people like other viruses throughout history. But it is not the plague (that killed tens of millions) or the Spanish Flu or even the Hong Kong Flu that killed more than a million people in 1968 and 1969 or any natural disaster or cosmic signs like “Blood Moons.”

The Coronavirus is one among numerous diseases that affect us. I agree with John Piper that the Coronavirus is a wake-up call for people who don’t know Jesus Christ as their Lord and Savior because the next eschatological event in our life will be our death, if not from a virus, it will be from something else.

We will not get out of this world alive, “inasmuch it is appointed for men to die once and after this comes judgment” (Heb. 9:27).