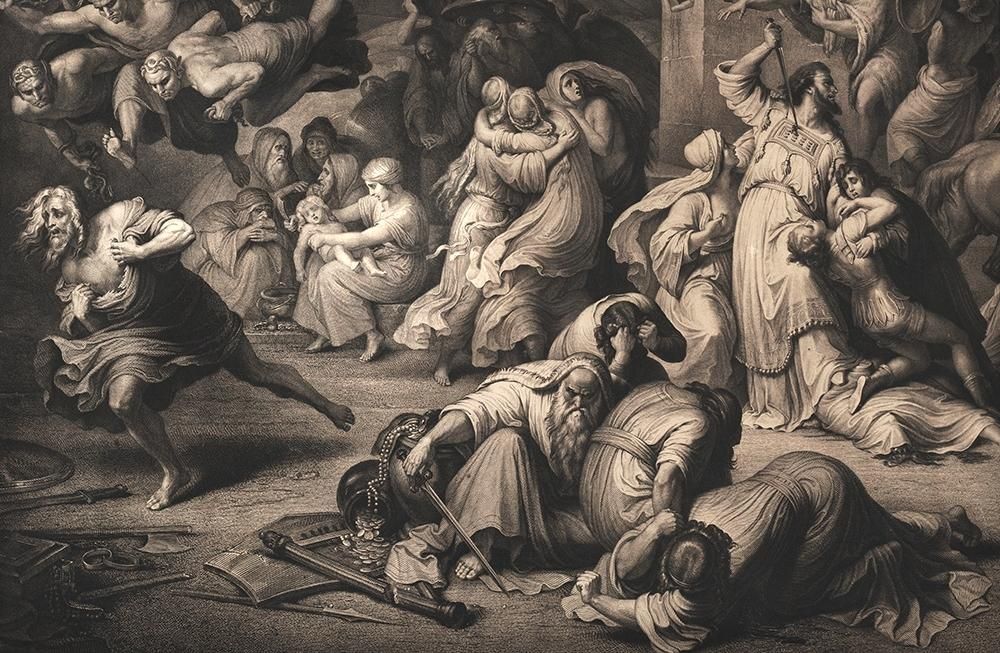 While searching for some information about the relationship between Matthew 24 and Luke 21, I came across a series of articles by Thomas Ice on Matthew 24–25. Ice is a dispensationalist. Thomas and I have debated on numerous occasions. Kenneth Gentry and Ice collaborated on The Great Tribulation: Past or Future? Published by Kregel Publications (1999).

Thomas is a good representative of traditional dispensationalism. Anyway, as I was doing my research, I started reading some of his comments on the Olivet Discourse on famines. Matthew (24:7), Mark (13:8), and Luke (21:11) mention famines which means the accounts all parallel and refer to the same period of time, the generation to whom Jesus was speaking (Matt. 24:34; Marl 13:30; Luke 21:32.

It amazes me to see how prophecy writers obscure the obvious. The following is from Ice’s comments on famines in his study of Matthew 24–25:

Both famines and earthquakes are governed by the phrase “in various places.” Lenski says, “The distributive kata means, “from place to place.” ((R. C. H. Lenski, The Interpretation of St. Matthew’s Gospel (Minneapolis: Augsburg Publishing House, 1943), 931.)) Leon Morris also explains: “In many places means that the disasters in question will be widespread.” ((Leon Morris, The Gospel According to Matthew (Grand Rapids: Eerdmans, 1992), 598)) This global perspective fits a future understanding of the passage and cannot be limited to the first century and the area of Israel alone.

Ice quotes me from my book Last Days Madness:

[P]reterist Gary DeMar cites the following as evidence for a first century fulfillment of famines: “Beginning with the book of Acts, we see that famines were prevalent in the period prior to Jerusalem’s destruction in A.D. 70: . . . The famine was dramatic evidence that Jesus’ prophecy was coming to pass in their generation just like He said it would…. Contemporary secular historians such as Tacitus, Suetonius, and Josephus mention other famines during the period prior to A.D. 70.” ((Gary DeMar, Last Days Madness: Obsession of the Modern Church (Powder Springs, GA: American Vision, 1999), 79.))

Notice the ellipsis, the three dots (…), that indicates that something has been left out. What I wrote, marked in bold below, refutes Ice’s argument that Jesus’ statement about famines was not fulfilled before that generation passed away as He predicted:

Beginning with the book of Acts, we see that famines were prevalent in the period prior to Jerusalem’s destruction in A.D. 70: “Now at this time some prophets came down from Jerusalem to Antioch. And one of them named Agabus stood up and began to indicate by the Spirit that there would certainly be a great famine all over the world [oikoumenē]. And this took place in the reign of Claudius [Roman emperor from AD 41 to 54]. And in the proportion that any of the disciples had means, each of them determined to send a contribution for the relief of the brethren living in Judea” (Acts 11:27–29).
The famine was dramatic evidence that Jesus’ prophecy was coming to pass in their generation just like He said it would. The famine was so great that the church as far away as Corinth participated in relief efforts (1 Cor. 16:1–5; Rom. 15:25–28). The entire Roman Empire was affected. Futurist William T. James writes that “God’s Word has much to say about famine,” ((William T. James, “Daniel’s Last-Days Flood,” Foreshadows of Wrath and Redemption, William T. James, gen. ed. (Eugene, OR: Harvest House, 1999), 90.)) and yet he does not mention Acts 11:27–29. Why? Is he afraid that his readers will ask why this passage is not a fulfillment of what Jesus said would happen?

The passage from Acts 11:27–28 should put an end to the claim that what Jesus said about famines in the Olivet Discourse taking place before that generation passed away was not fulfilled. It satisfies “in various places … from place to place … widespread” since it was “a great famine all over the world,” that is, over the entire Roman Empire, since that’s the meaning of oikoumenē, the word that’s translated as “world” in many translations.

The question is, why didn’t Ice quote my entire argument or at least spend more time dealing with Acts 11:27–28?

He claims the following “rebuts the preterist notion” of my argument:

Nor, again, is this feature in the prediction to be restricted to some such special famine as that which occurred during the reign of Claudius (Acts xi.28), too early a date for our passage, and to one or two particular cases of earthquake which happened in remote countries, and with which history has made us familiar (such as that in the neighborhood of Colossae, Oros. Hist. vii. 7, Tacit. Ann. xiv. 27 and that at Pompeii). ((Heinrich August Wilhelm Meyer, Critical and Exegetical Handbook to The Gospel of Matthew, 2 vols. (Edinburgh: T. & T. Clark, 1879), 2:131.))

Let’s not forget the famine that resulted from the siege of Jerusalem where starvation took over the city with horrific results. It’s no wonder Jesus said, “But woe to those who are with child and to those who nurse babes in those days!” (Matt. 24:19).

Josephus, the first-century Jewish author widely read and adapted by Christians, does indeed use his Jewish War to tell a spectacularly gruesome and dramatic story about a wealthy Jewish woman named Mary who ate her own child; she was discovered eating cooked meat during Titus’ siege of Jerusalem, only to identify the meat as her son and offer her questioners the other half of his body. (The Torah)

In fact, after reading this from Meyer, it confirms the preterist argument! I have no idea what he means by “too early a date for our passage,” a reference to Matthew 24:7. It’s only too early if you believe Jesus is referring to a still distant fulfillment. But it’s right on time if Jesus was describing events related to that generation.

It’s no wonder that the preterist interpretation of Bible prophecy is growing in popularity.