In an earlier article, I responded to a portion of Katherine Stewart’s opinion piece in The New York Times, “The Religious Right’s Hostility to Science Is Crippling Our Coronavirus Response.” You can read my original article here.

She goes on to write the following:

Today, the hard core of climate deniers is concentrated among people who identify as religiously conservative Republicans. And some leaders of the Christian nationalist movement, like those allied with the Cornwall Alliance for the Stewardship of Creation, which has denounced environmental science as a “Cult of the Green Dragon,” cast environmentalism as an alternative—and false—theology.

There are numerous logical and substantive problems with Stewart’s article. If you oppose LGBT rights, you are anti-science, even though homosexuality and transgenderism would be considered anti-science if political correctness did not determine a person’s employment and ability to receive grant money.

If you question that Global Warming/Climate Change is solely the result of human activity, you are anti-science. Stewart’s article is the usual anti-Christian, anti-conservative screed.

I’ve known Cal Beisner of Cornwall Alliance for many years, and I can guarantee you he is not anti-science. If Stewart were ever to get in a debate with Cal, she would be eaten alive, metaphorically speaking. The Cornwall Alliance is about the Stewardship of Creation. The following is their Vision statement:

We aspire to a world in which people, made in the image of God, reconciled to Him by Jesus Christ, and reflecting God’s own creativity, work together to enhance the fruitfulness, beauty, and safety of the earth, enabling more and more of our neighbors to enjoy good health, long life, freedom, justice, and spiritual and material abundance, for the glory of God and the good of our fellow man, thus addressing the two Great Commandments to love God and love our neighbor.

You can read Cornwall Alliance’s Declaration of Evangelical Stewardship here. It’s only radical to Katherine Stewart because she believes that draconian steps should be taken by governments to radically reduce carbon emissions that would have little effect on the climate at great cost to everything else.

Beisner and those who support the work of Cornwall Alliance believe that government control of the economy would have a devastating effect on the poor and would do very little to affect natural climate change.

You can read about the effect that such governmental actions would have here. It has nothing to do with a “Christian nationalist movement,” whatever that means, but I have a sneaky suspicion as to why she uses the word “nationalist.”

Using the word “nationalist” is an attempt to link it to another nationalist movement—Nazism—National Socialism!

Stewart’s attack on Evangelicals as a class has some Nazi history behind it. Christianity was considered a threat to the governing authorities in Nazi Germany, like what’s taking place in China and Islamic nations. Over time, churches were “confined as far as possible to the performance of narrowly religious functions, and even within this narrow sphere were subjected to as many hindrances as the Nazis dared to impose.”

This is the evaluation of a 1945 report published by the Office of Strategic Services (OSS), the precursor to the CIA. It was called The Nazi Master Plan: The Persecution of the Christian Churches and was prepared for the War Crimes Staff. It offered the following summary: “This study describes, with illustrative factual evidence, Nazi purposes, policies and methods of persecuting the Christian Churches in Germany and occupied Europe.” 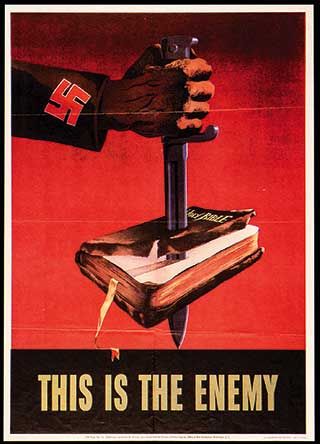 Where did the strategic plan begin? “Implementation of this objective started with the curtailment of religious instruction in the primary and secondary schools with the squeezing of the religious periods into inconvenient hours, with Nazi propaganda among the teachers in order to induce them to refuse the teaching of religion, with vetoing of . . . religious text books, and finally with substituting [a] Nazi Weltanschauung [worldview] and ‘German faith’ for Christian religious denominational instruction…. At the time of the outbreak of the war . . . religious instruction had practically disappeared from Germany’s primary schools.”

The next step was to neutralize the impact that churches would have on politics. “Under the pretext that the Churches themselves were interfering in political and state matters, [the Nazis] would deprive the Churches, step by step, of all opportunity to affect German public life.” How often do we hear that the “separation between church and state” means that churches must remain silent on social and political issues, that pastors cannot use their pulpits (unless they’re liberal) to influence legislation?

When Martin Niemoeller used his pulpit to expose Adolf Hitler’s radical politics, “He knew every word spoken was reported by Nazi spies and secret agents.” ((Basil Miller, Martin Niemoeller: Hero of the Concentration Camp, 5th ed. (Grand Rapids, MI: Zondervan, 1942), 112.)) Leo Stein describes in his book I Was in Hell with Niemoeller how the Gestapo gathered evidence against Niemoeller:

Now, the charge against Niemoeller was based entirely on his sermons, which the Gestapo agents had taken down stenographically. But in none of his sermons did Pastor Niemoeller exhort his congregation to overthrow the Nazi regime. He merely raised his voice against some of the Nazi policies, particularly the policy directed against the Church. He had even refrained from criticizing the Nazi government itself or any of its personnel. Under the former government his sermons would have been construed only as an exercise of the right of free speech. Now, however, written laws, no matter how explicitly they were worded, were subjected to the interpretation of the judges. ((Leo Stein, I Was in Hell with Niemoeller (New York: Fleming H. Revell, 1942), 175.))

In a June 27, 1937 sermon, Niemoeller made it clear to those in attendance that they had a sacred duty to speak out on the evils of the Nazi regime no matter what the consequences:

We have no more thought of using our own powers to escape the arm of the authorities than had the Apostles of old. No more are we ready to keep silent at man’s behest when God commands us to speak. For it is, and must remain, the case that we must obey God rather than man. ((Quoted in William L. Shirer, The Rise and Fall of the Third Reich (New York: Simon and Schuster, 1960), 239.))

A few days later, Niemoeller was arrested. His crime? “Abuse of the pulpit.”

The “Special Courts” set up by the Nazis made claims against pastors who spoke out against Hitler’s policies. Niemoeller was not the only one singled out by the Gestapo. “Some 807 other pastors and leading laymen of the ‘Confessional Church’ were arrested in 1937, and hundreds more in the next couple of years.” ((Shirer, The Rise and Fall of the Third Reich, 239.))

A group of Confessional Churches in Germany, founded by Pastor Niemoeller and other Protestant ministers, drew up a proclamation to confront the political changes taking place in Germany that threatened the people “with a deadly danger. The danger lies in a new religion,” the proclamation declared. “The church has by order of its Master to see to it that in our people Christ is given the honor that is proper to the Judge of the world…. The First Commandment says ‘Thou shalt have no other gods before me.’ The new religion is a rejection of the First Commandment.” ((Quoted in Eugene Davidson, The Trials of the Germans: An Account of the Twenty-Two Defendants before the International Military Tribunal at Nuremberg (Columbia, MO: University of Missouri Press, [1966] 1997), 275.))

Five hundred pastors who read the proclamation from their pulpits were arrested.

It’s not this bad in America—at least not yet. With people like Hollywood writer-director Judd Apatow out there calling people Nazis, we need to be on our guard:

“[Trump is] a Nazi. He wants no judicial process. He kidnapped children and commits acts of violence for political gain and to support his racist views,” he ranted back in 2018. “He admires violent dictators. Trump is a Nazi. The debate is over. Soon we will have proof he is a Nazi supported by the Russians.”

If Trump is a Nazi, then so are his supporters. That’s Leftist logic built from a manufactured premise to hide the real intent of the accusers.

Huey Long, who served as the 40th governor of Louisiana from 1928 to 1932 and was a member of the United States Senate from 1932, allegedly said this about fascism: “Of course we’ll have it. We’ll have it under the guise of anti-fascism.” ((Douglas Wilson, “Suppose for Just a Moment That Trump Takes It Walking Away,” Blog and Mablog (Jan. 6, 2020).))