Leftist are at it again. They are trying to make Christians a scapegoat for all that’s bad in the world. The latest attempt is by Katherine Stewart, the author of The Power Worshippers: Inside the Dangerous Rise of Religious Nationalism. She has written for nearly a dozen left-wing publications. She has it in for Trump voters.

Here’s the lead paragraph of her opinion article “The Religious Right’s Hostility to Science Is Crippling Our Coronavirus Response” that’s published in The New York Times:

Donald Trump rose to power with the determined assistance of a movement that denies science, bashes government and prioritized loyalty over professional expertise. In the current crisis, we are all reaping what that movement has sown.

Furthermore, science built on the operational assumptions of atheistic, naturalistic, and materialistic presuppositions should allow the virus to do its evolutionary thing of weeding out the herd by infecting the weak so only the strong survive. Viruses—part of the physical world—neither know nor care about what’s the moral thing to do. There isn’t a moral atom in our body. Viruses, bacteria, human meat machines that we are don’t care what happens to their competitors in an atheistic evolutionary worldview. 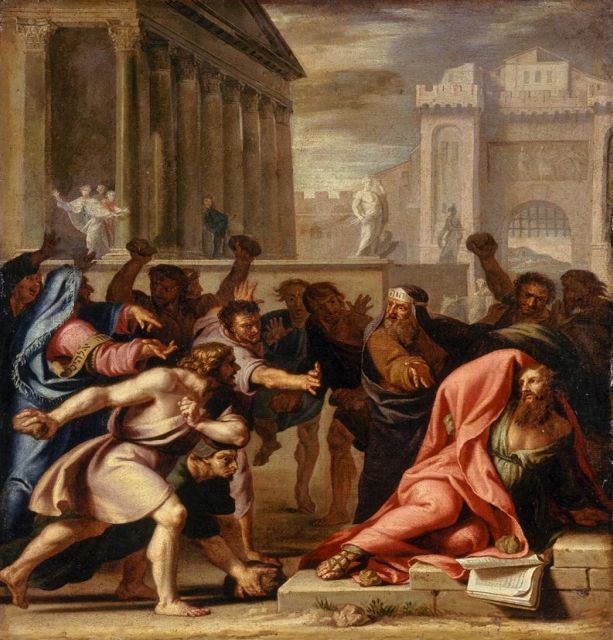 Andrew Seidel is an atheist. Why should science or medicine solve this pandemic? It seems to me, if atheists and evolutionists believe we are human animals, who have struggled for survival over eons of time through the operation of survival of the fittest, then the scientific option is to let the virus take its course to its natural end.

It’s religion, specifically the Christian religion, that believes that human beings are created in the image of God and therefore have value. The Declaration of Independence states that we are “endowed” by our “Creator with certain unalienable Rights.” There is no intrinsic value in evolved lifeforms that are nothing more than skin-clothed compositions of chemicals.

The Christian worldview values others, even our enemies (Luke 6:27–36). Within the operating assumptions of atheism, there is no ultimate justification for such a command. In times of plague, given the rationalistic and utilitarian approach to ethics, it’s logical to let the weak die:

The Christian response to plagues begins with some of Jesus’s most famous teachings: “Do unto others as you would have them do unto you” [Lev. 19:18; Matt. 7:12]; “Love your neighbor as yourself” [Mark 12:3–31]; “Greater love has no man than this, that he should lay down his life for his friends” [John 15:13]. Put plainly, the Christian ethic in a time of plague considers that our own life must always be regarded as less important than that of our neighbor.

During plague periods in the Roman Empire, Christians made a name for themselves. Historians have suggested that the terrible Antonine Plague of the 2nd century, which might have killed off a quarter of the Roman Empire, led to the spread of Christianity, as Christians cared for the sick and offered a spiritual model whereby plagues were not the work of angry and capricious deities but the product of a broken Creation in revolt against a loving God.

But the more famous epidemic is the Plague of Cyprian, named for a bishop who gave a colorful account of this disease in his sermons. Probably a disease related to Ebola, the Plague of Cyprian helped set off the Crisis of the Third Century in the Roman world. But it did something else, too: It triggered the explosive growth of Christianity. Cyprian’s sermons told Christians not to grieve for plague victims (who live in heaven), but to redouble efforts to care for the living. His fellow bishop Dionysius described how Christians, “Heedless of danger … took charge of the sick, attending to their every need.” (Foreign Policy)

Evolution would never have gotten off the ground if “Do unto others as you would have them do unto you” was in operation.

To show you how desperate Stewart is to make Christians scapegoats, she digs up three words from the 19th century “proslavery theologian Robert Lewis Dabney” who “attacked the physical sciences as ‘theories of unbelief.’”

Smearing an entire population based on their religion and making them scapegoats has a long history. From The New York Times:

Whose fault was the Black Death?

In medieval Europe, Jews were blamed so often, and so viciously, that it is surprising it was not called the Jewish Death. During the pandemic’s peak in Europe, from 1348 to 1351, more than 200 Jewish communities were wiped out, their inhabitants accused of spreading contagion or poisoning wells. ((Donald G. McNeil Jr., “Finding a Scapegoat When Epidemics Strike,” The New York Times (August 31, 2009).))

First, she poisons the well by bringing up Dabney’s slavery views. A person can be wrong about one thing and be right about other things, especially since many others agree with him on the claim that science is an unimpeachable discipline. It’s not. There are any number of scientists today who disagree on the origin, impact, and treatment of the Coronavirus.

Second, Stewart misrepresents Dabney’s position on science. Dabney is not against the scientific method but against the claim that science can be done in a secular vacuum.

Third, she does not tell her readers that the article she linked to is an “excerpt” of the much Dabney’s longer article “A Caution Against Anti-Christian Science.” Dabney’s argument is that “naturalistic science is logically limited by the premises of theism.” Modern science is the outgrowth of a biblical worldview. ((James Hannam, The Genesis of Science: How the Christian Middle Ages Launched the Scientific Revolution (Washington, DC: Regnery, 2011.) ))

Dabney did not attack the physical sciences. He attacked the absoluteness of the claims of scientists who believe that nature is all there is.

Notice the context of Dabney’s use of the phrase “theories of unbelief”:

Centuries hence, if man shall continue in his present state so long, when these current theories of unbelief shall have been consigned, by a truer secular science, to that limbus where the Ptolemaic astronomy, alchemy and judicial astrology, lie contemned, the servants of the cross will be winning larger, and yet larger, victories for Christ, with the same old doctrines preached by Isaiah, by St. Paul, by Augustine, by [John] Knox, by [Samuel] Davies.

Again, Dabney is criticizing the claim made by some that once a scientist makes a declaration in the name of science that it’s the final unchangeable word on the subject. Dabney notes that there was a time when “Ptolemaic astronomy, alchemy and judicial astrology” were defended scientific theories and now have been relegated to “limbus” (limbo), the region on the border of Hell.

He makes the point that advocates of “modern physical science … boast that the progress of science is firm, yea, infallible, and destined to no reviews or contradictions, but only continual accretions [additions], upon the impregnable basis laid by the inductive logic.” ((C.R. Vaughan, ed., Discussions by Robert L. Dabney, “A Caution Against Anti-Christian Science,” 4 vols. (Richmond, VA: Presbyterian Committee of Publication, 1892), 3:124.))

Atheism cannot account for the natural law, logic, reason, morality, or the scientific method. That is the premise of Dabney’s article. These points are driven home in Greg L. Bahnsen’s new book Against All Opposition: Defending the Christian Worldview (soon to be published by American Vision). Dabney makes this point crystal clear.

If mine is a pig’s destiny, why may I not hold this “pig philosophy”? Again, if I am but an animal refined by evolution, I am entitled to live an animal life. Why not? The leaders in this and the sensualistic philosophy may themselves be restrained by their habits of mental culture, social discretion and personal refinement (for which they are indebted to reflex Christian influences); but the herd of common mortals are not cultured and refined, and in them the doctrine will bear its deadly fruit. ((“The Influences of False Philosophies upon Character and Conduct,” in Discourses, 4:574.))

Because Christianity had so impacted nineteenth-century society, the ethical and cultural effects of Darwinism were at first minimal. In time, however, as consistency began to be demanded of the new naturalistic worldview, the evolutionary dogma impacted the world in ominous ways. Marxism and Nazism are built on Darwin’s theory. “Given the close relationship between Darwinism and the horrific crimes committed by Mussolini, Hitler, Stalin, Mao and Pol Pot’s Khmer Rouge Regime we are forced to conclude that ours has been the Darwinian century.” ((F. W. Schnitzler, “Darwinian Violence,” Christianity and Society, 4:3 (July 1994), 28.))

Sir Arthur Keith was a British anthropologist. He was also an atheist, evolutionist, and an anti-Nazi who had this to say about evolution and Hitler’s use of the materialist ideology:

The German Führer, as I have consistently maintained, is an evolutionist; he has consciously sought to make the practice of Germany conform to the theory of evolution. ((Arthur Keith, Evolution and Ethics (New York: G.P. Putnam’s Sons, 1947), 230.))

Being an evolutionist, Hitler could argue that he was only following the operating assumptions of the certainty of evolution. It’s no longer a theory; it is fact. Stewart admits this, as do today’s prominent atheists. One of the facts of evolution is survival of the fittest. The Nazis claimed and demonstrated that they were more fit. On what basis, given the operating assumptions of today’s naturalistic matter-is-all-there-is worldview, what uncontested moral absolutes could be raised against the action of the Nazis?

The following image is from the pro-evolution and pro-eugenics textbook A Civic Biology ((George W. Hunter, A Civic Biology (New York: American Book, 1914), 263.)) that set the 1925 Scopes Trial in motion:

Dr. Greg L. Bahnsen had this to say about the atheist dilemma when it comes to accounting for morality:

What philosophy of value or morality can the unbeliever offer which will render it meaningful to condemn some atrocity as objectively evil? The moral indignation which is expressed by unbelievers when they encounter the wicked things which transpire in this world does not comport with the theories of ethics which unbelievers espouse, theories which prove to be arbitrary or subjective or merely utilitarian or relativistic in character. In the unbeliever’s worldview, there is no good reason for saying that anything is evil in nature, but only by personal choice or feeling. ((Greg L. Bahnsen, “Does the Unbeliever Take Evil Seriously? The Problem of Evil: Part 2,” Biblical Worldview Magazine , American Vision (Dec. 1991).))

Benjamin B. Warfield (1851–1921), also a well-respected theologian, argued that evolutionists “necessarily represent … an ascent into morality” while the Bible represents a “descent from morality.” ((Warfield, “Evolution Development.” Quoted in Mark A. Noll and David N. Livingstone, eds., Evolution, Science, and Scripture (Grand Rapids, MI: Baker Books, 2000), 128.)) This remains a problem for evolutionists. How can matter ascend into morality unless morality first exists? Evolution in its present form can only be measured against meandering molecules, and those who were marched into the gas chambers were nothing more than a large conglomeration of molecules.

A Pig’s philosophy makes us all pigs. Atheists have made “Darwin’s dangerous idea” into a “universal acid” that eats through everything we believe and act upon. ((Daniel C. Dennett, Darwin’s Dangerous Idea: Evolution and the Meaning of Life (New York: Simon and Schuster, 1995), 63.))