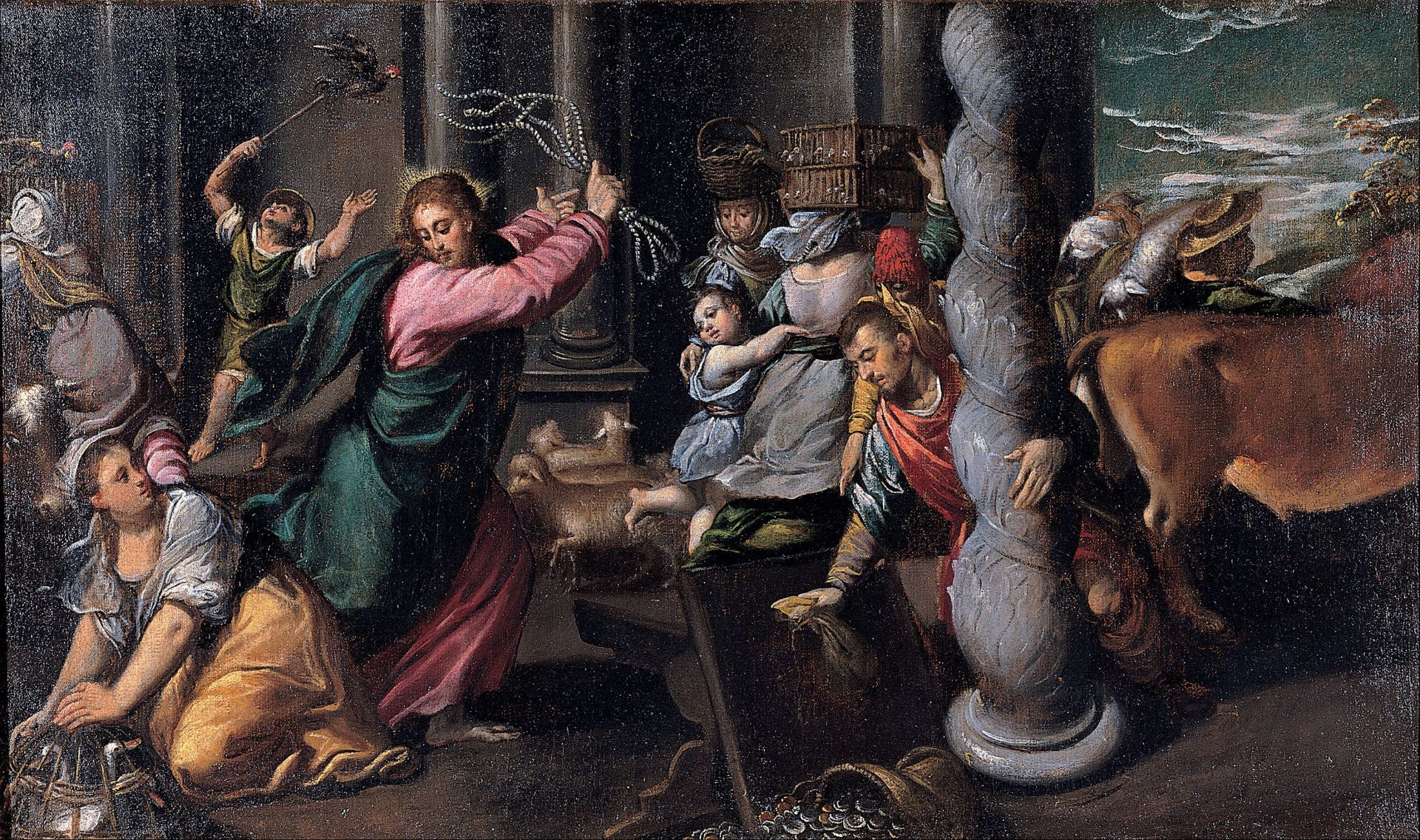 It had to happen. The “What Would Jesus Do?” moral prescription has become a simple moniker for answering all types of social questions. It began with Charles M. Sheldon’s In His Steps that asked, “What would Jesus do?” in certain situations. The four-word moniker has been adopted and adapted by more modern questions such as “What would Jesus eat?” and “What would Jesus drive?” No electric car. You would need a borrowed feces-dropping donkey (Matt. 21:1–7). ((“The medical facts are in. If we ate like Jesus ate, we will be healthier.” So reads the advertising copy for the book What Would Jesus Eat? written by Dr. Don Colbert and published by Thomas Nelson (Nashville, 2003). A mid-eastern diet of fish, grains, figs, and dates is certainly better than a Big Mac, fries, and a Diet Coke. But people in Israel had been eating a Mediterranean diet long before Jesus was born. Jesus ate what everybody else ate. There was no special “Jesus diet.” The fact that Jesus walked everywhere went a long way in keeping Him fit and trim.))

WWJP (What Would Jesus Pay?)

Charles M. Sheldon (1857–1946), a Congregational minister, wrote In His Steps in 1896 and read a chapter at a time to the young people in his congregation. The book was also serialized in the Chicago Advance. Because of copyright irregularities, the story entered the public domain immediately.

It’s not clear whether Sheldon received all the royalties due to him on the millions of copies sold over the years. In a 1935 authorized edition, Sheldon shows his appreciation to those publishers “that have kindly permitted him a share in the financial sales of the book.” Sheldon seems to infer that not everyone paid for the use of his original work.

The book was everywhere, and so were WWJD wrist bands, necklaces, and hats. Dozens of web sites carry the full text of the novel and sell WWJD paraphernalia. I wonder if these enterprising folk are paying royalties to the Sheldon estate? I doubt it. Apparently for some, What Would Jesus Pay? (in royalties) doesn’t come under the demands of a WWJD ethic.

WWJM (Who Would Jesus Marry?)

Can ethics be summarized as simply as WWJD? I don’t think so. There are many things that Jesus didn’t do that Christians do on a regular basis. Jesus is unique, and the work He came to earth to accomplish was also unique. In addition, there are a number of things that Jesus did do that we are not to do.

Physically cleansing the temple with a hand-made whip (John 2:13–22) and being crucified are two that quickly come to mind. Jesus did not get married. Are we to follow His example and abstain from marriage? Of course, having children would be out of the question too.

Jesus’ example alone is not enough to build an ethical worldview. The whole Bible is our moral guide. We know that Jesus blessed the institution of marriage by performing His first miracle at a wedding in Cana (John 2:1–11) and by giving instructions on the marriage relationship. He also turned water into wine, something that’s probably not mentioned by fundamentalist groups that encourage the wearing of WWJD wristbands.

Jesus enjoins couples to remain married based on one of the Bible’s earliest commands: “That He who created them from the beginning made them male and female, and said, `For this cause a man shall leave his father and mother, and shall cleave to his wife; and the two shall become one flesh’” (Matt. 19:5–6).

The Catholic Church has followed the example of Jesus regarding the marital status of its priests. Why does the Catholic priest take his vow of singleness and celibacy? The primary reason is to imitate Jesus Christ who was unmarried. But some claim additional reasons. “The four Gospels show that Jesus was unmarried so that he could be free to be poor and to preach his message. He had nowhere to lay his head. He was a street rabbi. He lived on handouts, and he was even buried in a borrowed grave.” ((Noel C. Burtenshaw, “Imitation of Jesus Not Mere Celibacy,” The Atlanta Journal/Constitution (August 26, 1990), C–2.))

The author misses the key to the biblical witness of Jesus’ ministry. Jesus did not remain unmarried so “he could be free to be poor and to preach his message.” Rather, Jesus’ singleness was related to His unique nature and mission. He was God who became man. Jesus’ mission was to save His people from their sins, not to be a model husband and father. He performed His unique duty by shedding His blood on a cross, rising from the dead, and ascending to His Father’s right hand where He now rules the world.

Someone with a lot of money could take care of his family as well as provide for the spiritual and physical needs of brothers and sisters in Christ (James 2:14–18) in addition to financing mission work around the world. How would a vow of poverty prove advantageous to missionaries since they would always be begging for funds to do their work?

From whom could they beg if poverty is the ideal? Many doctors join the mission field because they can afford to leave their practice and do not have to depend on the financial support of church members.

WWJL (Where Would Jesus Live?)

Jesus never owned a house: “The foxes have holes, and the birds of the air have nests; but the Son of Man has nowhere to lay His head” (Matt. 8:20). He had no money to pay even the smallest tax. Peter had to fish for a coin to satisfy the requirement to pay the temple tax (Matt. 17:24–27). To follow Jesus’ example, Christians should give all their money away to non-Christians (since, by Jesus’ example, Christians should not possess money) and never own a house. And yet, Jesus never condemned the ownership of property. In fact, Jesus spent much of His ministry time in the houses of friends (Matt. 9:10, 23, 28; 13:36; Luke 14:1).

WWJT (What Would Jesus Take?)

Again, by following Jesus’ example, Christians have the authority to take possession of other people’s property because of need. Jesus told His disciples that if anyone asked why they were taking a donkey and a colt, they were to say, “The Lord has need of them” (Matt. 21:3). Was Jesus a crypto-socialist?

Centuries ago, the church debated the issue of using Jesus as an example for ministry. The Spiritualists of the fourteenth century, a sect of the Franciscan Order, “contended eagerly for the view that Christ and his apostles had possessed absolutely nothing, either separately or jointly. This proposition had been declared heretical in a trial before an inquisitor.” ((Otto Zöckler, “Saint Francis of Assisi and the Franciscan Order,” The New Schaff-Herzog Encyclopedia of Religious Knowledge, ed. Samuel Macauley Jackson, 15 vols. (Grand Rapids, MI: Baker Book House, 1952), 4:359.)) If Jesus and His apostles possessed nothing (an indefensible claim given that they retained their fishing business: John 21:8), then those who take up the gospel ministry must follow their example (1 Tim. 5:18). St. Francis of Assisi made poverty and celibacy mandatory for all who would join his Order.

1. This is the rule and way of life of the Brothers Minor: to observe the holy gospel of our Lord Jesus Christ, living in obedience, without personal belongings and in chastity. . . .

6. The brothers shall possess nothing, neither a house, nor a place, nor anything. But, as pilgrims and strangers in this world, serving God in poverty and humility, they shall continually seek alms, and not be ashamed, for the Lord made himself poor in this world for us. (( “The Rule of Francis,” Eerdmans’ Handbook to the History of Christianity, ed. Tim Dowley (Grand Rapids, MI: Eerdmans, 1977), 266, 267.))

Jesus and the other New Testament writers made no such demand on the apostles or the church in general (1 Cor. 7:2–4). ((For a discussion of this difficult passage, see Gordon D. Fee, The First Epistle to the Corinthians, NICNT (Grand Rapids, MI: Eerdmans, 1987), 277–280.)) We know that the “the apostles, and the brothers of the Lord, and Cephas [Peter]” had a right to take along “a believing wife” on their missionary journeys (1 Cor. 9:5).

In addition, Paul defends the right to expect that those who labor in the gospel ministry should receive financial remuneration for their efforts: “If we sowed spiritual things in you, is too much if we should reap material things from you?” (1 Cor. 9:11). Paul does not refer to Jesus as an example to follow when it comes to marital status or economic position. Rather, he turns the attention of his readers to analogies from everyday life and “the Law of Moses” (1 Cor. 9:8–9; cf. Deut. 25:4).

WDBC (What Does the Bible Command?)

All Scripture is authoritative, not just the words and examples of Jesus. Jesus told His disciples that when the scribes and Pharisees sit in the seat of Moses, that is, when they speak true to Moses, do and observe all that they tell you (Matt. 23:2–3). Moses, that is, the Old Testament, is authoritative. This is why Paul describes Scripture as being “inspired” or “God-breathed” (2 Tim. 3:16). The entire New Testament is equally authoritative. By what we’ve seen so far, we can assert that WWJD is an inappropriate and ineffective ethical mandate. It does not go far enough in one direction, and it goes too far in another.

WWJD is an ineffective and incomplete ethical standard unless we see Jesus as He manifested Himself (John 1:1, 14). Jesus and the New Testament writers point us to the written Word, the Bible in its entirety, as the reference point to determine our relationship to God (Rom. 3:23), our need for a savior (John 14:6), and the moral worldview we should follow (2 Tim. 3:16–17).