Some prophecy writers are claiming that Revelation 6 depicts what’s taking place today with earthquakes (one just hit Utah) and pestilence or plagues. Is the Coronavirus a fulfillment of Revelation 6:8?:

I looked, and behold, an ashen horse; and he who sat on it had the name Death; and Hades was following with him. Authority was given to them over a fourth of the earth, “to kill with sword and with famine and with pestilence [θανάτῳ] and by the wild beasts of the earth.”

Similar language is used in Jeremiah 15:2–3 for a local judgment against Jerusalem (15:4–14). The same is true in Jeremiah 24, especially verse 10, where a different Hebrew word is used and is translated as “pestilence” and not just “death.”

The more accurate translation in Revelation 6:8 is “death” that would include pestilence and other effects of war and famine. “The story of Mary of Bethezuba is a story of cannibalism told by Josephus in his Jewish War (VI,193) which occurred as a consequence of famine and starvation during the siege of Jerusalem in August AD 70 by Roman legions commanded by Titus. The tale is only one account of the horrors suffered at Jerusalem in the summer of 70. "

In Luke 21:11, the Greek word λοιμοὶ (loimoi) is used and is translated as “plagues,” the only time the word is used in the New Testament. As I have mentioned in a previous article, pestilences and plagues are not unusual. They can be found in the Old Testament, secular history, and the era leading up to Jerusalem’s judgment in AD 70. For example, the Roman historian Suetonius wrote that there was such a “pestilence” at Rome during the reign of Nero that “within the space of one autumn there died no less than thirty thousand persons, as appeared from the registers in the temple of Libitina.” ((C. Suetonius Tranquillus, The Lives of the Twelve Caesars: Nero, 39.))

Now we come to the meaning of Revelation 6. What’s going on in this chapter? James M. Hamilton, Jr., a premillennialist, writes that “the opening of the seals in Revelation 6 corresponds to what Jesus describes in the Olivet Discourse in the Synoptic Gospels.” ((Hamilton, An Interview with Dr. James Hamilton. For further discussion of this point, see James M. Hamilton, Jr., Revelation: The Spirit Speaks to the Churches (Wheaton, IL: Crossway, 2012), 166–167. Also, Louis A. Vos, The Synoptic Traditions in the Apocalypse (Kampen, Netherlands: J.H. Kok N. V., 1965), 181–188.)) I agree. See my books Is Jesus Coming Soon?, Last Days Madness, and Wars and Rumors of Wars.

The following chart is from Hamilton’s commentary on Revelation: 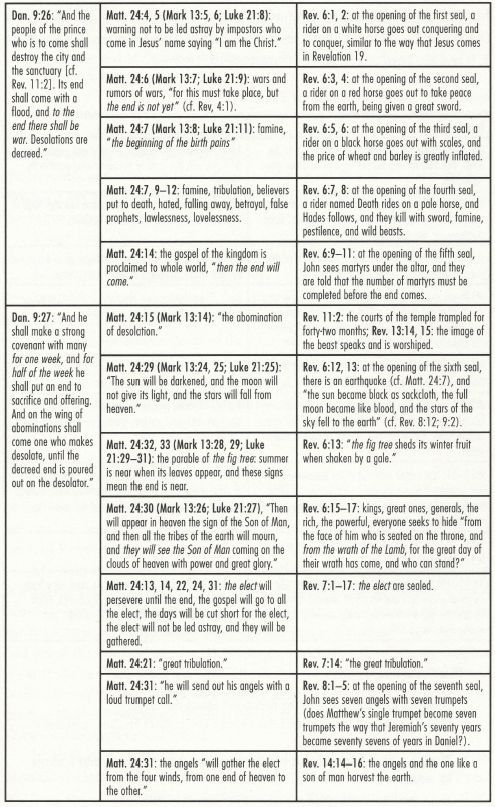 If the Olivet Discourse is describing events leading up to and including the destruction of Jerusalem that took place within a generation (Matt. 24:34), then Revelation must be given a similar interpretation. Consider how stellar phenomena are depicted.

In Revelation 6:13­–14, we read, “the stars of the sky fell to the earth, as a fig tree casts its unripe figs when shaken by a great wind. The sky was split apart like a scroll when it is rolled up, and every mountain and island were moved out of their places.” This passage is a partial citation from Isaiah 34:4 using the Greek translation of the Hebrew Old Testament, the Septuagint (LXX), which reads, “all the stars shall fall.” ((J. Richard Middleton, A New Heaven and a New Earth: Reclaiming Biblical eschatology (Grand Rapids, MI: Baker Academic, 2014), 179–210.))

Then there’s the description of the male goat in Daniel 8:10 that causes “stars to fall to the earth,” an action that would destroy the earth if Daniel was describing actual physical stars. These fallen stars are then “trampled” by the horn of a goat. It must have been a mighty big goat horn, similar in size to the giant woman in Revelation who was “clothed with the sun,” stood on the moon, and had a “crown of twelve stars” on her head (Rev. 12:1). Most likely the horn refers to a civil ruler and the stars represent civil or religious authorities ((James B. Jordan, The Handwriting on the Wall: A Commentary on the Book of Daniel, 2nd ed. (Powder Springs, GA: American Vision Press, 2007), 426–436.)) under the ruler’s dominion.

Jesus is using language that was understood by the people of His day. The Hebrew Scriptures are filled with similar symbolic “sign” (Rev. 1:1) language. There is dramatic end-of-the-world language in Zephaniah that is directed at Jerusalem and Israel (Zeph. 1). John Lightfoot makes the point that seemingly end-of-the-world language is a common feature in the Bible and most often points to the end of the social, religious, and political status of a nation:

The opening of the sixth Seal [in Rev. 6:12–13] shows the destruction itself in those borrowed terms that the Scripture uses to express it by, namely as if it were the destruction of the whole world: as Matt. 24:29–30. The Sun darkened, the Stars falling, the Heaven departing and the Earth dissolved, and that conclusion [of] ver. 16 [in Rev. 6]. They shall say to the rocks fall on us, &c. doth not only warrant, but even enforce us to understand and construe these things in the sense that we do: for Christ applies these very words to the very same thing (Luke 23:30). And here is another, and, to me, a very satisfactory reason, why to place the showing of these visions to John, and his writing of this Book [of Revelation] before the desolation of Jerusalem. ((John Lightfoot, The Whole Works of the Rev. John Lightfoot Containing “The Harmony, Chronicle and Order of the New Testament,” ed. John Rogers Pitman, 13 vols. (London: [1655] 1823), 3:337.))

When was this judgment to take place? Jesus had His present audience in view as He made His way to the cross:

When was the tree dry and without fruit? The last days of the generation that was confronted from the judgment sequence prophesied by Jesus.

Even though this virus is not an end-of-the-world sign or event, it should get our attention that we are mortal and almost any unforeseen event could lay us low and even kill us. Eternity is but a heartbeat away.