Is the current virus pandemic a sign that we are living in the last days, a fulfillment of Bible prophecy? We encounter such pandemics every year. Tens of thousands of people die as a result. None of them, however, compare with plagues of the past:

1. Two historic plagues ravaged the Roman Empire: the Antonine Plague (165-180 A.D.) and the Cyprian Plague (249-262 A.D.). The plagues killed roughly a quarter to a third of the population, striking down emperors (Marcus Aurelius, Hostilian, and Claudius II Gothicus), and ravaging the empire. As in the case of the coronavirus today, panic spread because the society did not understand the disease. (PJMedia)

2. The Plague of Justinian reached the Byzantine capital of Constantinople in AD 541 and was soon claiming up to 10,000 lives per day—so many that unburied bodies were eventually stacked inside buildings or left in the open.

3. The Black Death in 1347 was a virulent strain of plague that invaded Europe from the East, most likely via Italian sailors returning home from Crimea. This “Black Death” would eventually spend half a decade tearing across the continent. The populations of whole towns were wiped out, and it was said that the living spent most of their time burying the dead in mass graves. “We see death coming into our midst like black smoke,” the Welsh poet Jeuan Gethin wrote, “a plague which cuts off the young, a rootless phantom which has no mercy or fair countenance.” …The Black Death finally subsided in the West around 1353, but not before it killed as many as 50 million people—more than half the population of Europe.

4. The Italian Plague of 1629–1631 was one of the most calamitous outbreaks of Bubonic Plague began in 1629, when troops from the Thirty Years’ War carried the infection into the Italian city of Mantua. … In Milan and Venice, city authorities quarantined the sick in “pesthouses” and burned their clothes and possessions to prevent the spread of infection. The Venetians even banished some of their plague victims to a pair of islands in a nearby lagoon. These harsh measures may have helped contain the scourge, but it still killed some 280,000 people, including over half the residents of Verona. The Republic of Venice, meanwhile, lost nearly a third of its population of 140,000.

5. The Great Plague of London laid siege to the city several times during the 16th and 17th centuries, most famously between 1665 and 1666. … At its peak in September 1665, some 8,000 people were dying each week. … “Never did so many husbands and wives die together,” a reverend named Thomas Vincent wrote, “never did so many parents carry their children with them to the grave.” (His account of the plague in God’s Terrible Voice in the City by Plague and Fire,” 1667, is graphic; seven in his own household died.)

As the sickness spread, London’s authorities tried to contain the infected by quarantining them in their homes, which were marked with a red cross. Somewhere between 75,000 and 100,000 people eventually perished before the outbreak died down in 1666. Later that same year, London was visited by a second major tragedy when the Great Fire of 1666 torched much of its city center.

6. The Great Plague of Marseille was Western Europe’s last major outbreak of medieval plague began in 1720…. The disease arrived on a merchant ship called the Grand Saint Antoine, which had picked up infected passengers during a journey to the Middle East. The vessel was quarantined, but its owner—who also happened to be Marseille’s deputy mayor—convinced health officials to let him unload its cargo. Plague-carrying rat fleas soon spread across the city, sparking an epidemic. People died by the thousands, and the piles of bodies on the streets grew so large that convicts were conscripted to dispose of them. In nearby Provence, “plague walls” were even built to try to and contain the infection, but it still spilled over into southern France before finally disappearing in 1722. By then, it had killed roughly 100,000 people. (History.com)

7. Between 1918 and 1920 a disturbingly deadly outbreak of influenza tore across the globe, infecting over a third of the world’s population and ending the lives of 20–50 million people. Of the 500 million people infected in the 1918 pandemic, the mortality rate was estimated at 10% to 20%, with up to 25 million deaths in the first 25 weeks alone.  (Mphonline.com)

Luke’s version of events leading up to the dismantling the temple includes “plagues” and “great signs from heaven” (Luke 21:11). Plagues in the ancient world were common as they were in more modern times, for example, the Black Death or Bubonic Plague (1347–1351) and others listed above:

The total number of deaths worldwide is estimated at 75 million people, approximately 25–50 million of which occurred in Europe. The plague is thought to have returned every generation with varying virulence and mortalities until the 1700s. During this period, more than 100 plague epidemics swept across Europe. ((Jamie Frater, “Top 10 Worst Plagues in History,” Listverse (January 18, 2009): https://goo.gl/j8uytC Also, see George C. Kohn, Encyclopedia of Plague and Pestilence (New York: Facts on File, Inc, 1995) and Kenneth F. Kiple, Plague, Pox and Pestilence: Diseases in History (New York: Barnes & Noble books, 1997).))

Most likely people believed the end of the world was near for them when these devastating plagues hit. It wasn’t, because Jesus had the generation of His day in view.

As to plagues in the lead up to the destruction of the temple in AD 70, the Jewish-Roman historian Josephus (AD 37–_c._100) “mentions both pestilence and famine as the immediate preludes of the storming of Jerusalem. They were due, like the plague at Athens [430 BC], to the vast masses of people — Passover pilgrims — who were at the time crowded in the city.” ((F.W. Farrar, The Gospel According to St. Luke, Cambridge Bible for Schools and Colleges (Cambridge: At the University Press, [1880] 1910), 316.)) 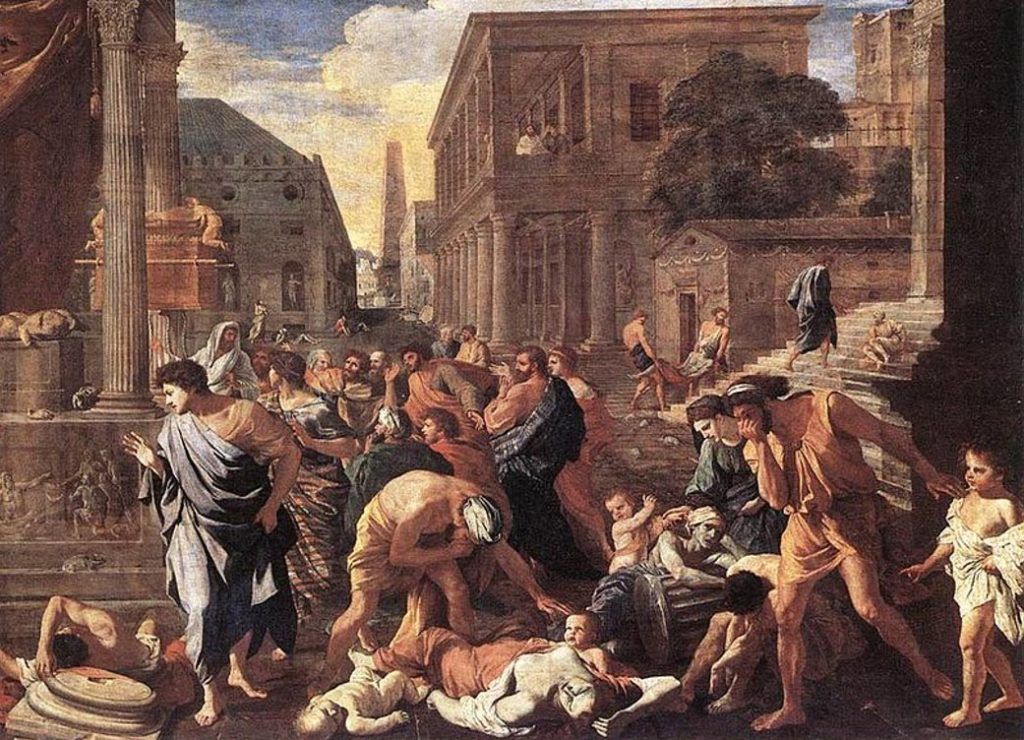 The Roman historian Suetonius wrote that there was such a “pestilence” at Rome during the reign of Nero that “within the space of one autumn there died no less than thirty thousand persons, as appeared from the registers in the temple of Libitina.” ((C. Suetonius Tranquillus, The Lives of the Twelve Caesars: Nero, 39.))

Tacitus also confirms pestilences and much more prior to AD 70:

A year of shame and of so many evil deeds heaven also marked by storms and pestilence. Campania was devastated by a hurricane, which destroyed everywhere countryhouses, plantations and crops, and carried its fury to the neighbourhood of Rome, where a terrible plague was sweeping away all classes of human beings without any such derangement of the atmosphere as to be visibly apparent. Yet the houses were filled with lifeless forms and the streets with funerals. Neither age nor sex was exempt from peril. Slaves and the free-born populace alike were suddenly cut off, amid the wailings of wives and children, who were often consumed on the very funeral pile of their friends by whom they had been sitting and shedding tears. ((Tacitus, Annals, 16.13.))

During the near end of what Jesus had prophesied, Josephus records the horror that was left behind:

Thus did the miseries of Jerusalem grow worse and worse every day, and the seditious were still more irritated by the calamities they were under, even while the famine preyed upon themselves, after it had preyed upon the people. And indeed, the multitude of carcasses that lay in heaps one upon another was a horrible sight, and produced a pestilential stench, which was a hindrance to those that would make sallies out of the city and fight the enemy. ((Josephus, Wars of the Jews, 6.1.1.))

None of these examples means that we should dismiss or minimize what is happening in our day. The Bible deals with possible contagious diseases in Leviticus 13-14. Consider the following advice from Martin Luther during the Black Plague:

I shall ask God mercifully to protect us. Then I shall fumigate, help purify the air, administer medicine and take it. I shall avoid places and persons where my presence is not needed in order not to become contaminated and thus perchance inflict and pollute others and so cause their death as a result of my negligence. If God should wish to take me, he will surely find me and I have done what he has expected of me and so I am not responsible for either my own death or the death of others. If my neighbor needs me however I shall not avoid place or person but will go freely as stated above. See this as such a God-fearing faith because it is neither brash nor foolhardy and does not tempt God. ((To the Reverend Doctor Johann Hess, pastor at Breslau, “Whether One May Flee from a Deadly Plague,” Luther’s Works, Devotional Writings II, vol. 43, eds. Jaroslav Jan Pelikan, Hilton C. Oswald, and Helmut T. Lehmann (Philadelphia: Fortress Press, 1999), 119–138.))

There are those who will want to use this latest “crisis” for political gain. In fact, it’s already happening. Beware of the Savior State! Let’s not forget that the political plague of Communism in the 20th century left behind 100 million dead.

At the same time, all necessary precautions should be taken but without panic. Some good things may come out of these events.