I was listening to CrossPolitic Studios last night and their interview with Andrew L. Seidel from the Freedom From Religion Foundation about his book The Founding Myth: Why Christian Nationalism is Un-American. Seidel is an atheist, so not only must he demythologize Christianity, he must demythologize all references to religion in our nation’s founding, and that can’t be done.

I didn’t get to hear all of the interview. Toby Sumpter commented that Seidel “claimed to be a relativist, but he’s absolutely sure America was not founded on Christian principles and for some reason, if it was, that’d be bad.” Toby, Gabe Rench, and David Shannon did a good job in drawing out some of Seidel’s inconsistencies.

I ordered a copy of The Founding Myth and will deal with some of his arguments at a later time. But for now, here are some of my thoughts.

There is a long history of the relationship between the Christian religion and civil government in our nation. John Adams, representing Massachusetts, and George Washington, representing Virginia, were present at early congressional meetings.

On March 16, 1776, “by order of Congress” a “day of Humiliation, Fasting and Prayer” where people of the nation were called on to “acknowledge the over ruling providence of God” and bewail their “manifold sins and transgressions, and, by a sincere repentance and amendment of life, appease his righteous displeasure, and, through the merits and mediation of Jesus Christ, obtain his pardon and forgiveness.” 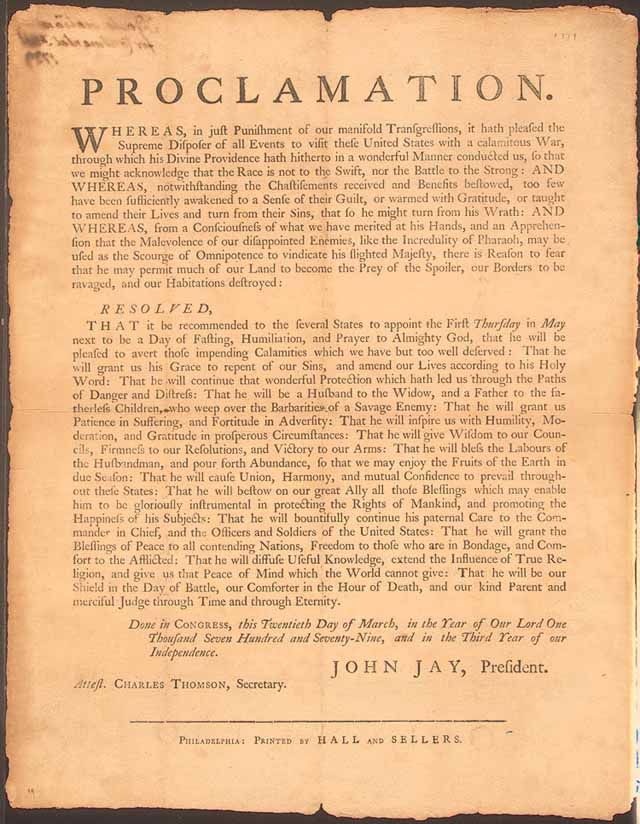 Congress set aside December 18, 1777 as a day of thanksgiving so the American people “may express the grateful feelings of their hearts and consecrate themselves to the service of their divine benefactor” ((In another context, “divine benefactor” would be viewed as a deist ascription to an unnamed deity. It’s obvious that in this context the Christian God is in view.)) and on which they might “join the penitent confession of their manifold sins . . . that it may please God, through the merits of Jesus Christ, mercifully to forgive and blot them out of remembrance.” Congress also recommended that Americans petition God “to prosper the means of religion for the promotion and enlargement of that kingdom which consists in righteousness, peace and joy in the Holy Ghost.”

Keep in mind that these two proclamations precede (1774) and follow (1777) the drafting of the Declaration of Independence (1776).

The Christian religion is, above all the Religions that ever prevailed or existed in ancient or modern Times, the Religion of Wisdom, Virtue, Equity, and humanity, let the Blackguard [Thomas] Paine say what he will; it is Resignation to God, it is Goodness itself to Man. ((John Adams, The Diary and Autobiography of John Adams, ed. L.H. Butterfield (Cambridge, MA: The Belknap Press of Harvard University Press, 1962), 3:233–234.))

Adams expressed his religious views on numerous occasions, but his call for a National Fast Day on March 6, 1799, is the most expressive. In it he described the Bible as “the Volume of Inspiration” and acknowledged “the growing providence of a Supreme Being and of the accountableness of men to Him as the searcher of hearts and righteous distributer of rewards and punishments.” The Proclamation recommended the following:

[That April 15, 1799] be observed throughout the United States of America as a day of solemn humiliation, fasting, and prayer; that the citizens on that day abstain, as far as may be, from their secular occupation, and devote the time to the sacred duties of religion, in public and in private; that they call to mind our numerous offenses against the most high God, confess them before Him with the sincerest penitence, implore his pardoning mercy, through the Great Mediator and Redeemer, for our past transgressions, and that through the grace of His Holy Spirit, we may be disposed and enabled to yield a more suitable obedience to his righteous requisitions in time to come; that He would interpose to arrest the progress of that impiety and licentiousness in principle and practice so offensive to Himself and so ruinous to mankind; that He would make us deeply sensible that “righteousness exalteth a nation, but sin is a reproach to any people [Proverbs 14:34].” ((John Adams, “National Fast Day,” A Compilation of the Messages and Papers of the Presidents, 1:284–286.)).

Both men borrowed moral capital from Christianity to make their case for a just society. Neither man was an atheist, and if asked to teach in today’s public schools, they would be forbidden to state their religious beliefs.

Invariably, the 1797 “Treaty of Tripoli” that includes the phrase from Article 11 that “the Government of the United States . . . is not in any sense founded on the Christian religion” always comes up in these discussions. ((William M. Malloy, Treaties, Conventions, International Acts, Protocols and Agreements between the United States of America and Other Powers, 1776–1909, 4 vols. (New York: Greenwood Press, [1910] 1968), 2:1786.)) Adams signed it, and so did a unanimous Congress, most of whom were orthodox Christians. How can this be explained in terms of the historical record?

— as it has in itself no character of enmity against the law, religion or tranquility of the Musselmen—, and as the said States never have entered into any war or act of hostility against any Mehomitan nation, it is declared by the parties that no pretext arising from religious opinion shall ever produce an interruption of the harmony existing between the two countries.

The statement in the 1797 treaty was nothing more than a pronouncement “that ‘the Christian religion’ as a formal institution was not a part of the American government in the same way that the religious structures of Islam are a part of Islamic governments.” ((Gary T. Amos, Defending the Declaration (Brentwood, TN: Wolgemuth and Hyatt, 1989), 9.))

The statement was to assure a Muslim government that America would not depose that government and impose Christianity by force, something Islamic states do.

According to Frank Lambert, Professor of History at Purdue University, the assurances found in Article 11 were “intended to allay the fears of the Muslim state by insisting that religion would not govern how the treaty was interpreted and enforced. John Adams and the Senate made clear that the pact was between two sovereign states, not between two religious powers.” ((Quoted in Sam Magnussen, “History Was Quoted Out of Context,” The Reflector (March 13, 2013).)) This is an important point missed by some atheists and historical revisionists.

Islam merged mosque and State. In the United States, there is a jurisdictional separation between church and State, a very biblical ideal. The First Amendment forbids Congress from interfering in the religious affairs of the states most of which were particularly Christian in their constitutions. For example, North Carolina.

Even the late anti-theist Christopher Hitchens got it right: “secularists like myself who like to cite this treaty must concede that its conciliatory language was part of America’s attempt to come to terms with Barbary demands.” ((Christopher Hitchens, “Jefferson Versus the Muslim Pirates,” City Journal (April 20, 2007).))

For a more complete study of the Treaty with Tripoli, see Gary DeMar, America’s 200-Year War with Terror: The Strange Case of the Treaty of Tripoli.

The Barbary pirates habitually preyed on ships from “Christian nations,” enslaving “Christian” seamen. Since this was a treaty between the United States and an Islamic government, was America not one of these Christian nations? “Barbary was Christendom’s Gulag Archipelago.” ((Stephen Clissold, The Barbary Slaves (New York: Barnes & Noble, [1977] 1992), 4.)) Joseph Wheelan’s historical assessment of the time is on target. “Except for its Native American population and a small percentage of Jews, the United States was solidly Christian, while the North African regencies were just as solidly Muslim—openly hostile toward Christians.” ((Joseph Wheelan, Jefferson’s War: America’s First War on Terror, 1801–1805 (New York: Carroll & Graf Publishers, 2003), 7.))

It is important to note that the 1805 treaty with Tripoli, drafted during Jefferson’s administration, differs from the 1797 Treaty in that the phrase “as the Government of the United States of America is not in any sense founded on the Christian Religion” is conspicuously absent. Article 14 of the new treaty corresponds to Article 11 of the first treaty. It reads in part: “[T]he government of the United States of America has in itself no character of enmity against the laws, religion, or tranquility of Musselmen.” ((Malloy, Treaties, etc., 2:1791.)) Once again, the issue of American interference in the internal affairs of an Islamic nation is at issue, the same issue that was stated in the 1797 treaty. Assurances are still offered that the United States will not interfere with Tripoli’s religion or laws. It’s obvious that by 1805 the United States had greater bargaining power and did not have to knuckle under to the demands of this Muslim stronghold. ((Michael Beschloss mentions the fact that “a treaty favorable to the United States was signed in 1805,” but says nothing about the 1797 treaty with its accommodationist language. (American Heritage Illustrated History of the Presidents [New York: Times Books, 2000], 58.)) A strong navy and a contingent of Marines also helped.