You may have seen the following observational test on Facebook. If you could find the one dog out of eight that is different from all the other dogs, you must be a genius. Invariably people demonstrated their genius aptitude by claiming they had found the dog that was uniquely different. The difference is in what dog is not missing characteristics missing on the other dogs. There’s only one dog that fits this category.

I’m adding this explanation because some people don’t seem to understand. I’ll help you out. It’s not No. 6.

“Easy peasy,” wrote one. Another person said they spotted the unique dog in under two seconds.

Have a go at it. Find the one dog that is different when compared to the other seven.

How did you do? Give it one more shot by starting with the tail. Evaluate each image one body part at a time. It has nothing to do with being a genius. It’s all about paying attention to details.

Here’s what I found:

No. 1: a white dot on the nose is missing

No. 2: the front left paw is missing a vertical line.

No. 3: the curved line is missing over the nose.

No. 4: nothing seems to be missing as compared to the others. It’s the dog that’s different.

No. 6: the right front paw is without lines and the vertical line between the dog’s nose and mouth (something I missed). The majority of people picked this one since it’s the most obvious.

No. 7: the curved line on the right rear leg is missing.

No. 8: the cropped hair on the top of the head is missing. 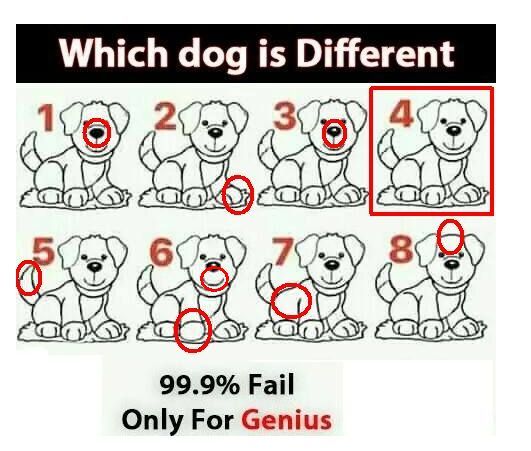 The different dog is the one that isn’t missing any of the features of the other dogs.

What’s the lesson? In this day of massive amounts of news, opinion pieces, arguments, posts, and arguments, we don’t have the time, energy, or inclination to evaluate a story in-depth and/or track down the facts. We see the most conspicuous out-in-front proposed fact or argument and stop there (No. 6).

My first go-through led me to believe that Numbers 4 and 8 were identical, but the question that was being asked seemed to indicate that there was only one dog that was different. After taking another look, I noticed the tuft of hair is missing on No. 8.

How many times have you read the Bible and then someone points out something that you never saw before? Why didn’t I see that before? It was there all the time, but I never saw it.

Consider this post on Twitter by Jim Carrey on the topic of abortion. He wrote: “I think If you’re going to terminate a pregnancy, it should be done sometime before the fetus becomes Governor of Alabama.” He is so blinded by his worldview that abortion has become a means to an end in order to maintain his worldview.

Jordan Sekulow of the American Center for Law and Justice said that Carrey demonstrated that he “knows full well the grisly details of this abortion procedure, and that these unborn babies are, in fact, human lives.” Many who support abortion admit that they are killing a human being, but for them, it’s the greater good. Like this example:

I had an abortion when I was young, and it was the best decision I have ever made. Both for me, and for the baby I didn’t want, and wasn’t ready for, emotionally, psychologically and financially. So many children will end up in foster homes. So many lives ruined. So very cruel. (May 16, 2019 via Twitter).

Take a look at this short video that shows people who after seeing what abortion is, change their minds to a degree.