For years liberals have turned the Christmas story into a political lecture. The birth of Jesus is political and everything else. Herod the Great was the first to understand the threat to the political and economic status quo:

After Jesus was born in Bethlehem in Judea, during the time of King Herod [the Great], Magi from the east came to Jerusalem and asked, “Where is the one who has been born king of the Jews? We saw his star in the east and have come to worship him.” When King Herod heard this he was disturbed, and all Jerusalem with him.

The Herods were at the center of political intrigue. John the Baptist lost his head because he dared to question the sexual ethics of Herod Antipas, “that fox” (Luke 13:32). This same Herod would conspire to have this king crucified after which Pilate and Herod Antipas became friends (Luke 23:12). King Herod Agrippa I imprisoned Peter (Acts 12:1-5) and had James the brother of John executed, an action that “pleased the Jews” (Acts 12:1-3), most likely the political wing in Judea. Herod Agrippa II oversaw the trial of Paul in Caesarea (Acts 26).

When the gospel made its way throughout the Roman Empire, there were those who understood the threat.

“These men who have upset the world have come here also; and Jason has welcomed them, and they all act contrary to the decrees of Caesar, saying that there is another king, Jesus.” They stirred up the crowd and the city authorities who heard these things (Acts 17:6-8).

Jesus was a threat to everything and everyone who claimed to be the ultimate authority of people, places, and things. This is why the Herods took swift action as any tyrant would. They set out to make sure this future king and His followers would not succeed in their mission to disciple the nations (Matt. 28:18-20) by “preaching the kingdom of God, and teaching concerning the Lord Jesus Christ…” (Acts 28:31).

Jesus is still seen as a threat. That’s why secularists use Him as a tool to put Christians on the defensive. Jesse Jackson was the first to turn Joseph and Mary into a “homeless couple” when he claimed that Christmas “is not about Santa Claus and ‘Jingle Bells’ and fruitcake and eggnog,” of which all Christians would agree, but about “a homeless couple.” ((As reported in The Atlanta Journal/Constitution (December 28, 1991), A9.)) Jesus isn’t Herod’s political threat. He’s a political prop.

Hillary Clinton, in comments critical of former New York Mayor Rudy Giuliani’s homeless policies, claimed that “Christmas celebrates ‘the birth of a homeless child.’” ((Cited in “Washington” under Politics in USA Today (December 1, 1999), 15A.)) Once again, the goal is to dilute the power of the incarnation.

This isn’t the first time that the Left has used Jesus, Mary, and Joseph to affect immigration policy. This is the safe Jesus, “meek and mild” and easy to cage. Karen Clark Ristine, a senior minister at the Claremont United Methodist Church where the caged Jesus, Mary, and Joseph are on full display described the Holy Family as “the most well-known refugee family in the world.”

It’s shocking to learn how ignorant people are about the Bible. Joseph and Mary were neither homeless nor refugees because they were citizens of Israel as well as legal residents of the Roman Empire. Mary went to live with her cousin Elizabeth upon hearing about her pregnancy and “stayed with her about three months, and then returned to her home” (Luke 1:56). Presumably, her parents owned a home and did not throw her out when they learned of her pregnancy.

Typical of governments that make laws without considering the consequences, there was not enough housing for traveling citizens (Luke 2:1).

The fact that “there was no room in the inn” did not make them homeless any more than a family that takes a trip is by definition homeless if they encounter a “no vacancy” sign. Mary and Joseph had enough money to pay for lodging. The problem was inadequate housing, not a lack of funds or inhospitality. The Greek word translated “inn” (Luke 2:7) is inaccurate when compared to the same word used in Mark 14:14 and Luke 22:11 where it’s translated as “guest room.”

The best of what was available was offered to Mary and Joseph. They weren’t told to go back home. No one stopped them from entering Bethlehem. There is nothing in the text that shows they were treated harshly. Why would they be? They were citizens of Israel.

Someone obviously showed them hospitality since the Wise Men came “into the house” where Jesus was “with Mary His mother” (Matt. 2:11). It’s possible that the couple was back in Nazareth by this time.

Joseph was warned to escape from the treachery of Herod by going to Egypt, also part of the Roman Empire:

[A]n angel of the Lord appeared to Joseph in a dream and said, “Get up! Take the Child and His mother and flee to Egypt and remain there until I tell you; for Herod is going to search for the Child to destroy Him.” So Joseph got up and took the Child and His mother while it was still night, and left for Egypt. He remained there until the death of Herod. This was to fulfill what had been spoken by the Lord through the prophet: “OUT OF EGYPT I CALLED MY SON” (Matt. 2:13-15; Hos. 11:1).

Leftists have little regard for the Bible unless it can be used to scold Christians for judging righteously (Matt. 7:1-2; John 7:24) and to support socialism based on passages about voluntary giving (Acts 2:42-45; 4:32-35).

In this season of Christmas as Christians around the world celebrate the birth of Jesus, it is important to remember the journey Jesus, Mary, and Joseph traveled. Their journey is recounted in the Gospel of Matthew where Mary and Joseph flee Judea for Egypt fearing Jesus would be murdered by King Herod. That journey, in an effort to save the life of Jesus, makes clear they were refugees.

Second, there was a large Jewish population in Egypt in the first century. “In Josephus’s history, it is claimed that, after the first Ptolemy took Judea, he led some 120,000 Jewish captives to Egypt from the areas of Judea, Jerusalem, Samaria, and Mount Gerizim. With them, many other Jews, attracted by the fertile soil and Ptolemy’s liberality, emigrated there of their own accord. An inscription recording a Jewish dedication of a synagogue to Ptolemy and Berenice was discovered in the 19th century near Alexandria. Josephus also claims that, soon after, these 120,000 captives were freed of their bondage by Philadelphus.” (Wikipedia) 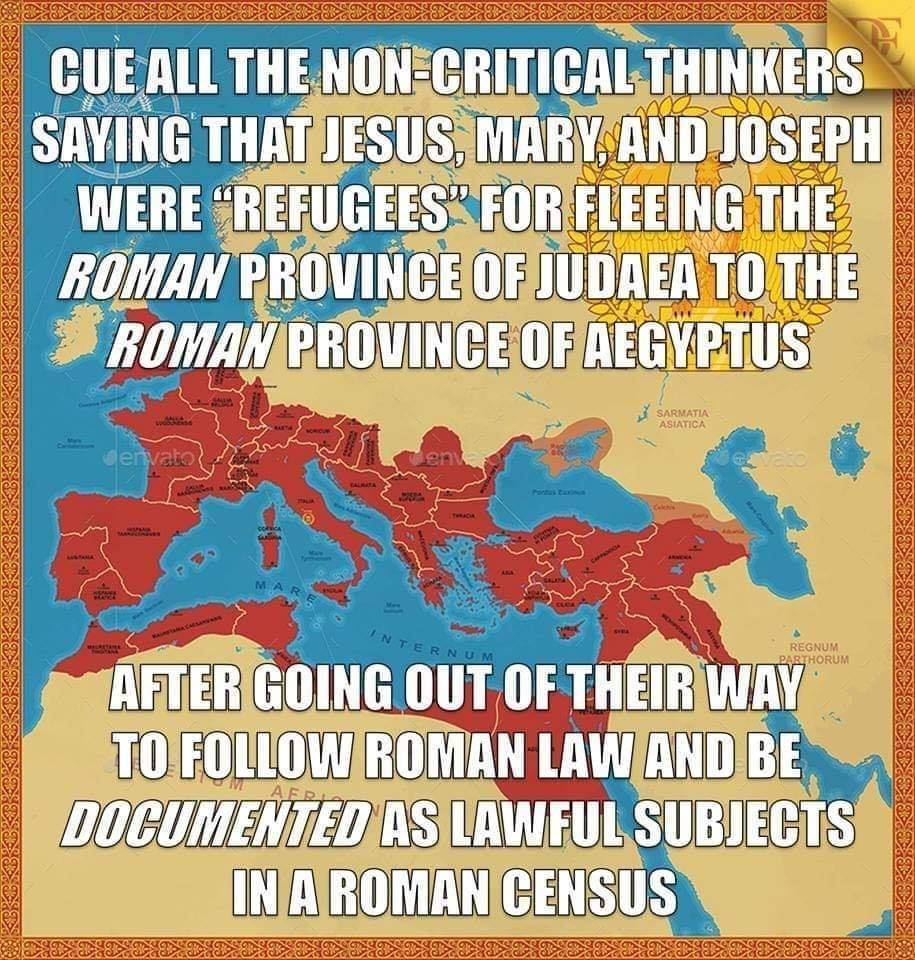 Third, the angel could have warned Joseph to go to other parts of Israel where Herod had no jurisdiction, except that there is typological significance for Jesus being “called out” of Egypt. Peter J. Leithart’s comments explain Israel’s reversal of fortune and why Joseph was commanded to go to Egypt. You see, Israel was the new Egypt (Rev. 11:8):

All along the way, the exodus gets reversed, inverted, subverted, turned inside out and on its head. The murderous king is not an Egyptian Pharaoh, but Herod, “King of the Jews.” The threatening land is not Egypt, but Israel. And the land where the Son finds safety is not Israel but Egypt. The new Moses comes to deliver His followers not from Egypt but from an Israel that has become no better than Egypt.

Fourth, there is a second part of the command given by the angel. They were to remain in Egypt until the angel told Joseph it was safe to return. After the death of Herod, they returned to Israel and avoided Judea because another Herod was ruling there. How many aliens and refugees return to their home nations after entering the United States?

Fifth, from Nazareth to Bethlehem, to Egypt, and back to Nazareth, Jesus, Joseph, and Mary never left the Roman Empire.

Sixth, let’s assume that Egypt was an independent nation at the time and not under the authority of the Romans. Does anyone believe that its leaders would not have protected its border if 10,000 Israelis demanded entry?

Seventh, it’s possible that Joseph and his family were scrutinized by Roman officials in Egypt. Since Joseph had a marketable skill as a τέκτων (tekt__ōn), artisan/craftsman/carpenter (Matt. 13:53-55), he was permitted to stay.

The modern refugee question is not about whether the United States should permit refugees to enter. Some type of “shibboleth” (Judges 12:1-6) is needed to weed out terrorists, gangs, sex traffickers, drug smugglers.

In addition, there needs to be an overhaul of our welfare system, not just for immigrants and refugees but for all Americans.