What are children told about Thanksgiving in our nation’s government (public) schools? Who or what are they thanking? Ancient fish that evolutionists claim are our grandmothers? “Grandmother Fish is the first book to teach evolution to preschoolers.” There is no god in the world of evolution. Are children to thank the molecules that evolved from “goo to you”?

Grove City College Professor Paul Kengor recalls a conversation he “recently had with a friend who works in the children’s section at Barnes & Noble” and “regularly briefs [him] on the latest political correctness and rank secularism pervading today’s books.”

She told him that in all the books on Thanksgiving, only one mentioned that thanks was given to God.

Kengor asked her, “What are they giving thanks to?”

“Thankful for what?” Kengor asked.

If your children go to a public school, there’s a good chance that they won’t be told why Thanksgiving is celebrated.

Thanksgiving celebrations go back to the colonial era. In addition, there were national civil pronouncements of thanksgiving with God as the object of thanks.

On Thursday, September 24, 1789, the first House of Representatives voted to recommend the First Amendment of the newly drafted Constitution to the states for ratification. The next day, Congressman Elias Boudinot from New Jersey, proposed that the House and Senate jointly request of President Washington to proclaim a day of thanksgiving for “the many signal favors of Almighty God.” Boudinot said that he “could not think of letting the session pass over without offering an opportunity to all the citizens of the United States of joining, with one voice, in returning to Almighty God their sincere thanks for the many blessings he had poured down upon them.” ((The Annals of the Congress, The Debates and Proceedings in the Congress of the United States, Compiled From Authentic Materials by Joseph Gales, Senior (Washington, DC: Gales and Seaton, 1834), 1:949–950.)) 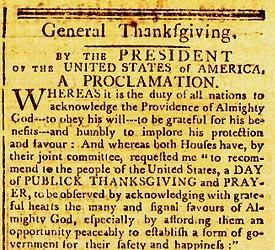 Read Washington’s Proclamation here: “Wait for ‘Crybullies’ to Attack George Washington for Saying This About Thanksgiving.”

Thanksgiving was joined with a spirit of repentance.

Beginning with Lincoln, United States’ Presidents proclaimed that the last Thursday in November would be set aside for a National Day of Thanksgiving. Franklin D. Roosevelt changed the celebration to the third Thursday in November “to give more shopping time between Thanksgiving and Christmas.” ((Edmund H. Harvey, Jr., ed., Readers Digest Book of Facts (Pleasantville, NY: The Reader’s Digest Association, [1985] 1987), 125.)) Ever since this pragmatic and commercial approach to Thanksgiving was promoted, its original meaning has steadily been lost.

The erosion of the original intent of Thanksgiving as it was practiced by the colonists and sanctioned by presidents and Congress can best be illustrated by the way some textbooks handle the subject. One elementary school social studies book has thirty pages of material “on the Pilgrims, including the first Thanksgiving. But there is not one word (or image) that referred to religion as even a part of the Pilgrims’ life. One mother whose son is in a class using this book wrote . . . that he came home and told her that ‘Thanksgiving was when the Pilgrims gave thanks to the Indians.’ The mother called the principal of this suburban New York City school to point out that Thanksgiving was when the Pilgrims thanked God. The principal responded by saying ‘that was her opinion’ — the schools could only teach what was in the books!” ((Paul C. Vitz, Censorship: Evidence of Bias in Our Children’s Textbooks (Ann Arbor, MI: Servant Books, 1986), 3.))

There is no doubt that these early Christian settlers thanked the Indians for their generosity in supplying venison to supplement the Pilgrims’ meager Thanksgiving rations of parsnips, carrots, turnips, onions, radishes, and beets from their household gardens.

As the historical record shows, however, thanksgiving was ultimately made to the God of the Bible. “Governor Bradford, with one eye on divine Providence, proclaimed a day of thanksgiving to God, and with the other eye on the local political situation, extended an invitation to neighboring Indians to share in the harvest feast…. This ‘first Thanksgiving’ was a feast called to suit the needs of the hour, which were to celebrate the harvest, thank the Lord for His goodness, and regale and impress the Indians.” ((Diana Karter Appelbaum, Thanksgiving: An American Holiday, An American History (New York: Facts on File Publications, 1984), 9.))

Early celebrations of thanksgiving were expressions of deep gratitude to God for life itself. Many who partook of the bounty from God’s creation set before them were thankful just to be alive. How times have changed in America.

Now public school children are taught to thank the government for everything.

Attempts at a socialistic economic system have been repeatedly tried with abject failure.

The Pilgrims were initially organized as a Collectivist society as mandated by contract by their sponsoring investors. No matter how much a person worked, everybody would get the same amount. It didn’t take long for the less industrious to realize that their diminished labor would net them the same result of the most industrious.

William Bradford, the acting governor of Plymouth Colony, wrote the following in his first-hand history of events:

The experience that we had in this common course and condition, tried sundry years . . . that by taking away property, and bringing community into a commonwealth, would make them happy and flourishing – as if they were wiser than God.

For this community (so far as it was) was found to breed much confusion and discontent, and retard much employment that would have been to their benefit and comfort. For young men that were most able and fit for labor and service did repine that they should spend their time and strength to work for other men’s wives and children without [being paid] that was thought injustice.

This [free enterprise] had very good success, for it made all hands industrious, so as much more corn was planted than otherwise would have been.

Not only is Socialism unbiblical and immoral; it doesn’t work.