Our long-time friend, Daniel Hill Riedel, is a professional artist with a passion for Reformed Theology. He was also a close personal friend of Dr. Cornelius Van Til, the father of presuppositional apologetics. Daniel spent much time with Dr. Van Til and was able to witness his life and character first-hand. Daniel came away impressed by Dr. Van Til’s genuine Christ-like attitude. Read Daniel’s endearing letter below about a few touching moments with his friend and modern reformer. -- Gary DeMar -———————-

“Hello, Dr. Van Til?” “Yes, may I help you?” “Dr. Van Til, this is Dan Riedel. I studied with one of your students, Jim Grier, at Cedarville College. I was wondering if we could meet.” “Oh yes, I remember him. Please come over.”

And so, my friendship with Dr. Van Til the last eight years of his life began with this simple phone call. It was October 1979. We had just moved into the Philadelphia area and I realized that I was living close to this well-known apologist and theologian. His number was listed in the phone book, so I picked up the phone. During the eight years that followed, I had the providential privilege of seeing the most important aspect of this man that many did not: his godly character. More than any book he wrote, lecture he gave, or debate he had, it was his humble, holy living that had the biggest impact on me and so many others. 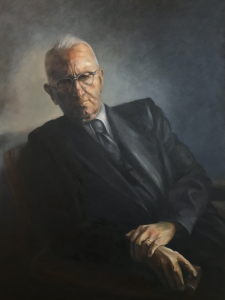 Van Til is most-famously known for his presuppositional apologetics, primarily expressed in his book, Defense of the Faith. But I believe the real power of his apologetics was that he lived out the principles of 1 Peter 3:15-16: “but sanctify Christ as Lord in your hearts, always being ready to make a defense to everyone who asks you to give an account for the hope that is in you, yet with gentleness and reverence; and keep a good conscience so that in the thing in which you are slandered, those who revile your good behavior in Christ will be put to shame.”

This is how I remember Dr. Van Til. He sanctified Christ as Lord in his heart. He lived a godly life. He was a humble man. And his Christ-like character gave real power to his defense of the faith. I spent a lot of time with him, visiting in his home, attending Bible studies, working on my original Princeton/Westminster Theologians project, attending concerts, traveling with him to Sacramento to attend the Chalcedon Conference on Christianity and the Arts held in his honor. During all of these shared experiences, he never brought up his work unless asked. He always asked me about myself and family. He always put others first. He was an amazing testimony of God’s grace.

The most powerful experience with his humility was when his son Neil passed away suddenly of a brain aneurism. I went to his home, to visit and offer my condolences and hopefully some comfort. I found him sitting on the swing of his front porch where he had written many of his well-known books by hand. “Dr. Van Til, I’m so sorry for your loss. I’m praying for you.” With tears in his eyes he replied, “Dan, the Lord gave, and He has taken away. Blessed be the name of the Lord.” As always, I believed I was more blessed and comported by him than he by me.

My prayer is that Reformation 502 will remind us of Dr. Van Til, Martin Luther and these other men of God who fought for the truth, defended the faith and the gospel of Jesus Christ out of godly lives and a love of the truth. And that it will motivate us to Keep Reforming in our own lives, the church, and the culture.

I hope you will enjoy these art prints of some of our beloved and respected reformers. I am donating a double tithe to American Vision—20% of all the sales that come via American Vision. So, when you order Reformation 502 artwork, please select “American Vision” in the 20% Donation drop down menu at checkout.