What happens to the children of parents who espoused the Christian faith? Franky Schaeffer has repudiated his father’s work and his own work he did with and for his father. Josh Harris has denounced the faith of his father, Greg Harris. Jonathan Merritt is promoting same-sex everything. His father is James G. Merritt, the Senior Pastor of Cross Pointe Church in Georgia.

Now we come to Ronald Reagan, Jr. He’s an outspoken atheist, “an unabashed atheist,” to put a finer point on it. He’s done a video ad promoting the anti-Christian advocacy group Freedom from Religion Foundation. Appropriately, the 30-second commercial ran during the latest Democrat debate. The Democrat Party has become the Atheist Party. In 2012, the Democrats voted to remove “God” from the Party’s platform. After some pushback (optics), “God” was reinstated, probably because the Party’s God is the State, and the Dems are OK with that. 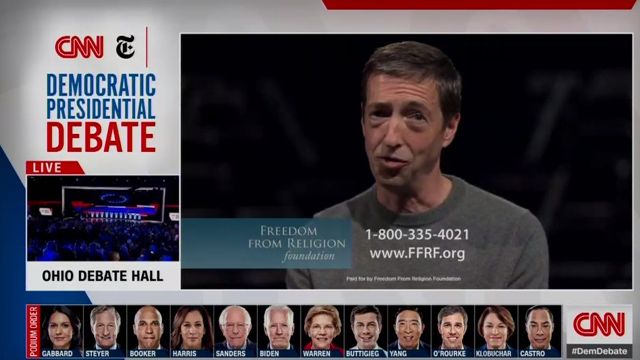 Actually, neither party cares that much for God. He gets in the way of so many godless policies.

Here’s some of what Ron Reagan said:

Hi, I’m Ron Reagan, an unabashed atheist. I’m alarmed by the intrusions of religion into our secular government. That’s why I’m asking you to support the Freedom from Religion Foundation, the nation’s largest and most effective association of atheists and agnostics working to keep state and church separate, just like our founding fathers intended…. Ron Reagan. Lifelong atheist. Not afraid of burning in hell.

Does the First Amendment require a secular government as “our founding fathers intended”? Is the First Amendment violated when Christians apply biblical principles to public policy issues like killing unborn babies, redefining marriage, working for true justice, and limiting the power and authority of the State? The Civil Rights Movement was founded by ministers who used biblical arguments to support their cause.

I wonder what Ron Reagan would say to Democrat presidential candidate Cory Booker who appealed to Micah 6:8 to defend one of his policies:

He has told you, O man, what is good; And what does the LORD require of you But to do justice, to love kindness, And to walk humbly with your God?

Here’s the thing, “atheists use Christianity in order to … beat Christianity. It is easy to point to medieval atrocities, etc. But these are only atrocities to us today because we are viewing these through a Christian lens. As [Rene ] Girard ((René Noël Théophile Girard (1923-2015) was a French historian, literary critic, and philosopher of social science.)) offers: if someone went to the Roman [government] two-thousand years ago with some complaint of justice or past atrocity (e.g. the taking of native lands, demands for reparations, etc.), the response would be ‘Who are you?  You are not a citizen.’ After which, a death sentence would be proclaimed.” (Source)

As an atheist, Ron Reagan can’t account for goodness, love, or justice because we are animals. Lewis Dartnell begins his book Origins: How Earth’s History Shaped Human History with these four words: “We are all apes.” Actually, we’re much less than apes given the operating assumptions of atheists. We’re descendants of pond scum.

John West of the Discovery Institute had this to say about the real-world implications of Darwinism, the religion of atheists like Ron Reagan, in a must-read interview with J.C. Derrick in World Magazine:

Where has Darwinian thought had the most influence on society today? The area of faith. Darwin’s theory wasn’t just about change over time—it was that we’re part of an accidental process. So Darwin has been the greatest gift to people who would like to deny that God exists. But it’s gone way beyond that: We’ve seen Darwinism used to devalue human life, because Darwin thought humans are basically animals. At the end of On the Origin of Species he says it’s through death, disease, and starvation that the best things have come about in nature.

It seems like some of these ideas are not always connected to Darwin because people read On the Origin of Species without reading his later book, The Descent of Man. Exactly. I have met scholars who say Darwin has nothing to do with religion or morality—it’s just about science. I ask: “Have you read The Descent of Man?” No. That is where Darwin talks about religion, morality, mind, and social policy, about how he thinks we’re destroying the human race by inoculating people against smallpox and helping the poor.

Let the weak die on their own. Correct. Darwin was a kind and compassionate man, so he worried about the implications, but that’s what he thought the theory meant. He thought that if we follow reason, we probably shouldn’t be doing things to help the people he thought were defective.

When atheists argue that it’s OK for the State to kill unburn babies, atheists are using the State to enforce their beliefs. Forcing schools to promote atheism is not religious neutrality.

The Leftist anti-Christian hate group Southern Poverty Law Center has a version of Amos 5:24 engraved in stone outside its offices. It was a favorite Bible passage of Martin Luther King, Jr. “It was the civil rights movement and many religious leaders like Martin Luther King Jr. and others who, based on Christian convictions, pushed back and made [the] view [of Darwinism] unfashionable.” You see, atheists can’t live consistently with their matter-in-motion worldview, so they borrow the moral shell of the Bible and redefine its language to suit their bankrupt worldview: 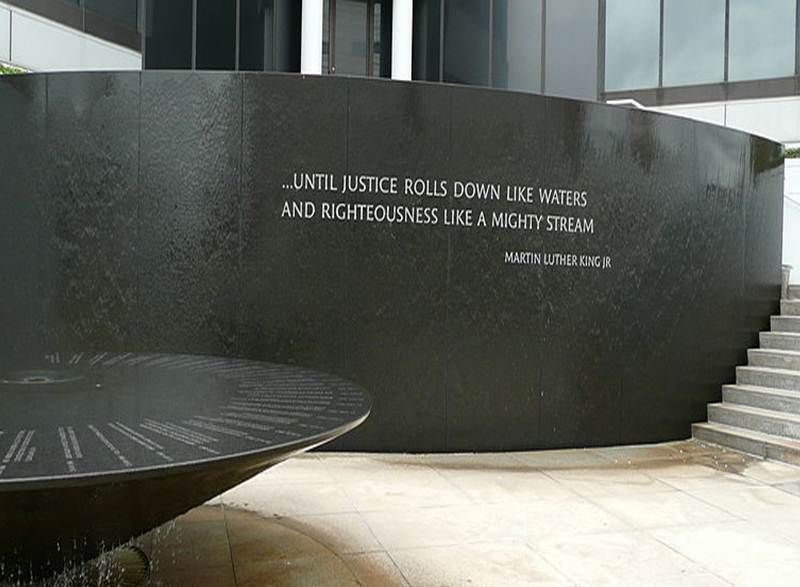 Again, there is no such as “righteousness” and “justice” in an atheist worldview.

Too many debates over the meaning of the First Amendment are confused by a failure to cite it accurately or comprehensively: “Congress shall make no law respecting an establishment of religion, or prohibiting the free exercise thereof; or abridging the freedom of speech or of the press; or the right of the people peaceably to assemble, and to petition the Government for a redress of grievances.” An accurate interpretation of the amendment must include the following: 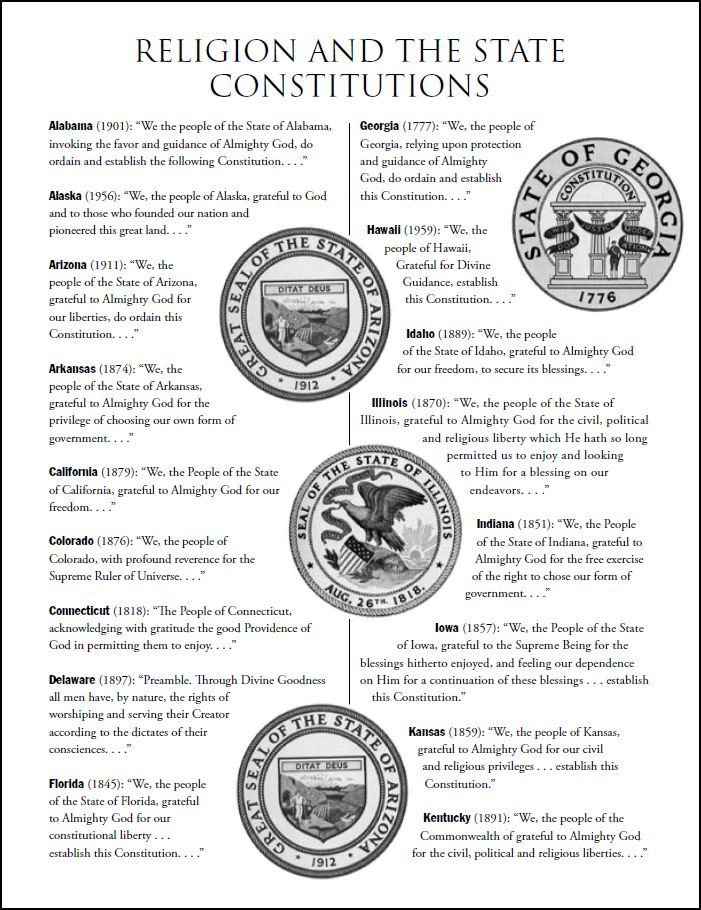 Click Here to See all 50 State Constitutions and Their Religious Statements.[/caption]

The Declaration of Independence declares that our rights are an endowment from our “Creator.” There is even an appeal to the “Supreme Judge of the world” and “with a firm reliance on the protection of divine Providence.”

The Constitution ends with “Done in the Year of Our Lord…” and even sets Sunday aside as a day of rest for the President.

Two chaplains, Bishop Samuel Provost and the Reverend William Linn, were appointed to Congress, one to the House of Representatives and one to the Senate, with a salary of $500 each with no thought of violating the Constitution. Since then, both the Senate and the House have continued regularly to open with prayer. On March 16, 1776, “by order of Congress” a “day of Humiliation, Fasting and Prayer” where people of the nation were called on to “acknowledge the overruling providence of God” and bewail their “manifold sins and transgressions, and, by a sincere repentance and amendment of life, appease his righteous displeasure, and, through the merits and mediation of Jesus Christ, obtain his pardon and forgiveness.”

Congress set aside December 18, 1777 as a day of thanksgiving so the American people “may express the grateful feelings of their hearts and consecrate themselves to the service of their divine benefactor” and on which they might “join the penitent confession of their manifold sins … that it may please God, through the merits of Jesus Christ, mercifully to forgive and blot them out of remembrance.” Congress also recommended that Americans petition God “to prosper the means of religion for the promotion and enlargement of that kingdom which consists in righteousness, peace and joy in the Holy Ghost.” The proclamation can also be seen in Gary DeMar, America’s Christian History (Powder Springs, GA: American Vision, 2005), 252. Keep in mind that these two proclamations precede (1774) and follow (1777) the drafting of the Declaration of Independence.

On April 30, 1789, George Washington took the oath of office with his hand on an open Bible. After taking the oath, he added, “I swear, so help me God.” Following Washington’s example, presidents still invoke God’s name in their swearing-in ceremony. ((Richard G. Hutcheson, Jr., God in the White House: How Religion Has Changed the Modern Presidency (New York: Macmillan, 1988), 37.)) The inauguration was followed by “divine services” held in St. Paul’s Chapel, “performed by the Chaplain of Congress.” ((Stokes and Pfeffer, Church and State in the United States, 87.))