Columbus Day is celebrated on October 14th this year. Columbus Day became a national holiday in 1937. Italian immigrants were a persecuted minority, as were other immigrant groups even though these Old World immigrants had entered the United States legally. As a way to bolster Italian pride, Italians rallied around Christopher Columbus as a way to show the people of the United States that they were faithful Americans.

As usual, Leftists are using Christopher Columbus as a way to disparage the United States.

D.C. Council member David Grosso (I-At Large) proposed emergency legislation this week — which the council supported Tuesday [10/8/19] — to rename Monday’s holiday Indigenous Peoples’ Day. Alexandria and Prince George’s County made similar moves, joining states and jurisdictions across the country that have argued that Christopher Columbus and other colonizers oppressed the native people already living in the Americas when Europeans arrived.

Check out Mary Grabar’s heavily referenced and readable book Debunking Howard Zinn: Exposing Fake History That Turned a Generation Against America (2019) published by Regnery. The first chapter is a comprehensive evaluation of how Zinn and other historians have represented Christopher Columbus.

The Social Justice Warriors are on the march. They attacked a bronze statue of Christopher Columbus in Yonkers, New York. It was found beheaded. A Columbus statue in Baltimore was vandalized. New York Mayor Bill de Blasio was reviewing whether a statue of the explorer at Columbus Circle is racist. (Axios) If this determination is made, it will have to come down. Here’s the problem. “Columbus Circle … is the point from which all official distances from New York City are measured.”

If the statues of Christopher Columbus have to go, what about the cities named after the explorer?

Roughly 2.7 million Americans live in 54 counties, districts, cities, incorporated towns, boroughs, villages and census designated places named after Columbus… The explorer’s biggest legacies in terms of population are Columbus, Ohio, and the District of Columbia, both with populations in excess of half a million. (BizJournals) 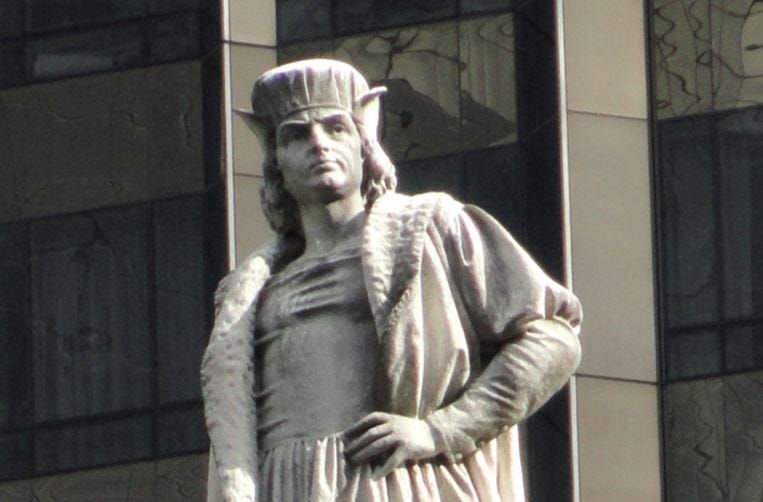 That’s right. Our nation’s capital would have to be renamed the District of Indigenous People. This might be more accurate since it’s the place where human sacrifice (abortion) has been made legal. Look at this image of amputated body parts and compare it to the sale of aborted baby parts:

The Caribs eventually took the bodies of those they had captured in war and, if they were plump, they roasted them hanging from large trees on poles, or boiled them in large pots made of clay, first cutting off their heads and discarding them; if they were too thin, they stuffed them with various rich foods, as we do with fowls which we are saving for a feast-day. Something must be said about the captive children: the pitiless men make them eunuchs immediately, and after they have fattened them up, they gather them on a holiday of their country and make them sit in the middle of their circle, the poor crowd of children, the wretched troops of humans fattened for food. Then one of the Caribs (for “carib” is a noble name among them: it means, as I said before, “man strong in war”) walks around the pitiful flock of children with many gesticulations of his arms, and many contortions of his pitiless face and many body movements and an altogether fierce expression, twisting his body around them with a cruel look, and then, with a single slash of his wooden sword, which is as sharp as if it were made of hard steel, he cuts off the heads of this one or that, as many as he pleases or has been decided by the whole group. Then, as a great cheer from the abominable men follows, they celebrate a feast-day, a day filled with pleasure, on the flesh of children fattened beyond what is human. ((Alessandro Geraldini, Bishop of Santo Domingo, Hispaniola. “On Caribs and Tainos,” in Christopher Columbus and the Enterprise of the Indies: A Brief History with Documents, eds. Geoffrey Symcox and Blair Sullivan (Boston/New York: Bedford St. Martin’s, 2005), 172-173.))

A statue of an Aztec priest holding up an aborted baby could be erected next to the Lincoln Memorial. 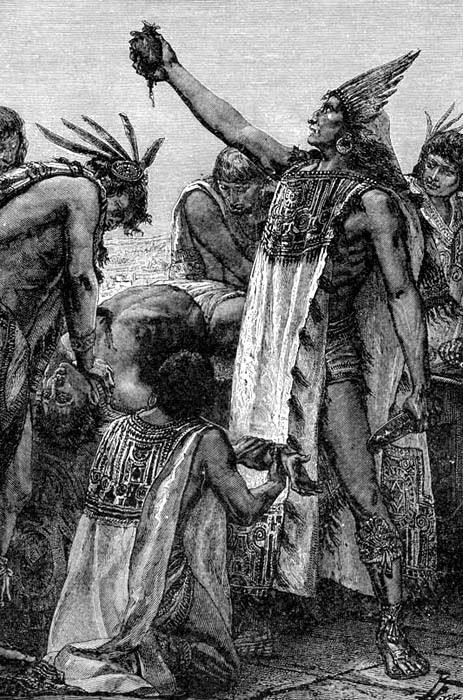 It’s already being considered in California. Los Angeles Daily News reporter Elizabeth Chou published a story that included an interview with an L.A. resident of Aztec descent who wanted to abolish Columbus Day to take “another step forward.” Chou devoted four paragraphs to his plans to protest while wearing the garb of an Aztec. But she left out that his own people have a monstrous history of human sacrifice. If we’re going to celebrate indigenous peoples, let’s be honest about who they were.

Instead of Columbus, this guy wants to celebrate the Aztecs. I suspect that a lot of Americans would be OK with the substitute because they most likely have no idea who the Aztecs were and what they did.

While Cortez’s arrival caused Montezuma fear and dread, it gave hope to many of the Indian tribes who suffered under Aztec rule. The Aztecs had raided neighboring tribes for years, capturing thousands of victims for human sacrifice, a central part of the Aztec religion. Cortez and his men were horrified at the Aztec’s slaughter of countless human lives.

When Cortez entered the Aztec capital, he spotted the center of religious worship, the sacrificial pyramid. He made his way up the hundred and fourteen steps with some of his best soldiers following close behind. Montezuma was at the top waiting for him. What Cortez and his battle-hardened men saw there shocked them like nothing they had ever seen before. Montezuma had just sacrificed some boys to keep the gods happy, and there was blood everywhere. Bernal Diaz, an eyewitness, describes the scene:

All the walls . . . were so splashed and encrusted with blood that they were black, the floor was the same and the whole place stank vilely. . . . The walls were so clotted with blood and the soil so bathed with it that in the slaughterhouses of Spain there is not such another stench. ((Quoted in Albert Marrin, Aztecs and Spaniards: Cortes and the Conquest of Mexico (New York: Atheneum, 1986), 111.))

As the Spaniards climbed down the temple pyramid and made their way through the city, they saw more unspeakable horrors. They passed rooms where the bodies of sacrificial victims were being prepared for feasts. They saw racks that held more than a hundred thousand human skulls.

Attempts by historical revisionists to paint the Aztecs as peaceful natives who dwelled in the splendor of an unspoiled Eden is a gross corruption of the historical record.

In ancient Mexico, human sacrifice was an offering to the gods of people’s most precious possession, their blood. The custom that most startled the Spaniards, ritual cannibalism, was in fact the attainment of a spiritual idea: It was a true communion. ((Serge Gruzinski, The Aztecs: Rise and Fall of an Empire, trans. Paul G. Bahn (New York: Harry N. Abrams, [1987] 1992), 49.)) 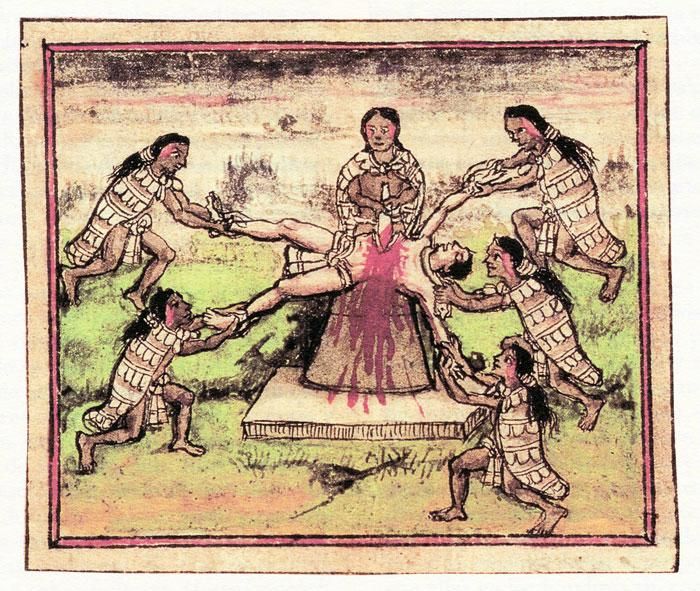 Aztec priests threw their victims down on a sacrificial stone, opened their chest with a flint knife, and pulled out the still beating heart, which was then burned in a stone urn. “Each year thousands of Aztecs had their hearts cut out of their living bodies and offered to the Sun god, who was also their god of war. Thousands more were burned alive, skinned, and drowned as offerings to other gods.” ((Albert Marrin, Inca and Spaniard: Pizarro and the Conquest of Mexico (New York: Atheneum, 1989), 34.)) How would today’s historical revisionist explain the daily bloodletting? I can just see it now. “The Aztecs were a highly advanced culture, especially in the area of medicine. Open heart surgery was practiced on a regular basis. Rarely if ever did a patient live, but it was the courage of the Aztecs to attempt the impossible that set them apart from their Spanish rivals.”

Doing them a “Favor”

Like the Aztecs, the Inca had a culture steeped in blood. Yet, we’re told that the “Inca were never that bloodthirsty. When they needed a special favor from the gods, hundreds were sacrificed.” Hundreds, thousands, what’s a few sacrificial victims between religious pluralists? We need to be more tolerant of their beliefs since the Incas were not malicious when they sacrificed their victims. Actually, the priests were doing them a favor.

Terrible as human sacrifice seems to us, we should remember that the Inca thought it necessary to their well-being. Sacrificial victims were not being punished for any crime; they were being rewarded for their beauty. The killing was done as painlessly as possible and without anger or hatred. Being sacrificed was, indeed, an honor that guaranteed eternal life with the gods and thus a “favor.” ((Marrin, Inca and Spaniard, 34–35.))

The above was written in the spirit of pluralism and toleration of everyone’s religion, even ones that encouraged digging out a person’s heart with a flint knife. If you’re one of the most favored, you might be drugged with cocoa (to ease the pain), dressed in fine clothes, and strangled with a rope before they tear your palpitating heart from your chest.

Certainly, the Catholic Conquistadors had their faults. Even so, their exploits, both religious and military, nearly eradicated ritual human sacrifice from Central and South America. It was Cortez’s repudiation of religious pluralism that liberated those tribes who suffered under the Aztec’s bloody religion.

William A. Hamilton, who formerly taught Western civilization at Nebraska Wesleyan University, offers a much-needed antidote to the misguided efforts of today’s multiculturalists:

The point is not to put down pre-Columbian culture. But before the politically correct multiculturists assign Columbus to the ash heap of history, let us not dismiss the conquistadors as less civilized than the natives they encountered. They ended massive ritual human sacrifice. ((William A. Hamilton, “The conquistadors were not all bad,” USA Today (October 8, 1992), 15A.))

Maybe that’s why today’s woke culture wants to celebrate the lives of indigenous peoples. They’re just like them.